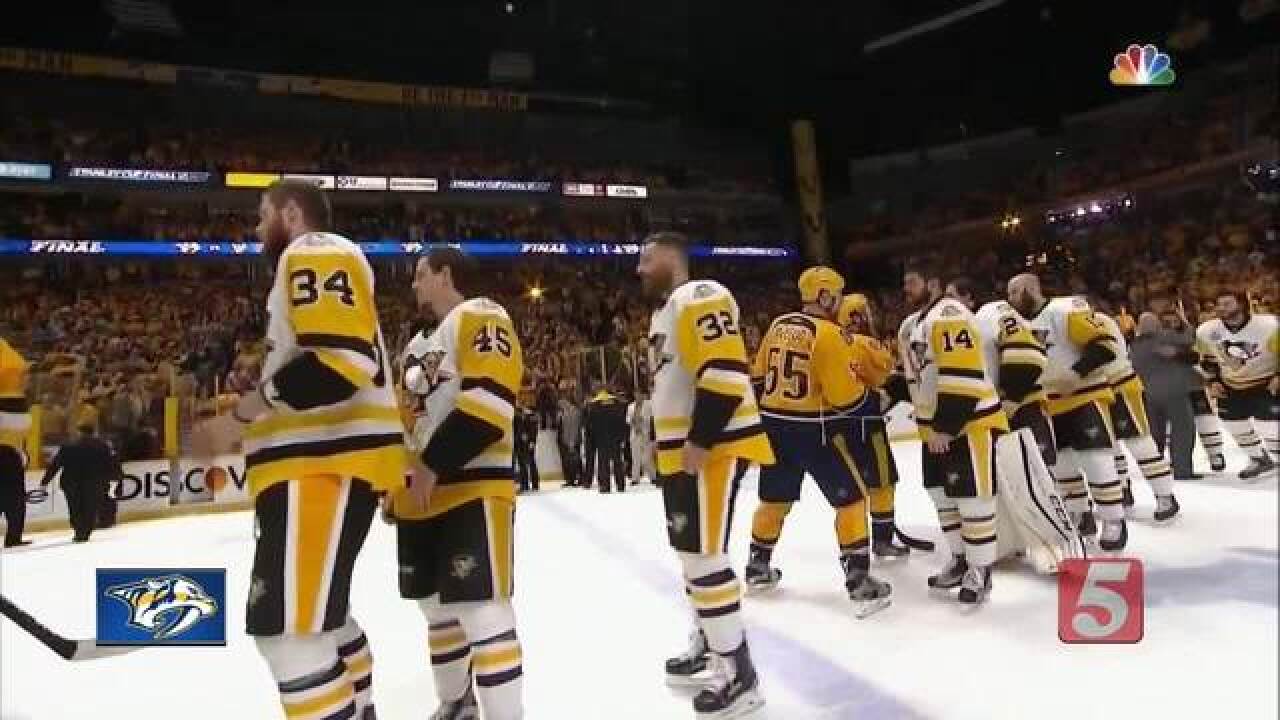 For 60 nights this spring, the Predators wowed the hockey world, a seemingly unstoppable force on their home ice backed by a rabid and rapidly growing fanbase and a neverending list of celebrity endorsers.

And then it ended, 2-0 in game six of the Stanley Cup Final, as former Predator Patric Hornqvist punching in a rebound goal with just 1:35 to play in the game to hand his old team it's most devastating loss to date.

An empty-net goal by Carl Hagelin caused the normally delirious Bridgestone Arena crowd to fall silent as the final seconds ticked off the clock.

Then the 17,000 gold-clad supporters once again rose to their feet to salute their team one last time, only to have their patented ovation cut short by the presentation of the Stanley Cup to the Penguins.

It was Sidney Crosby, Penguins captain and Conn Smythe Award winner as MVP, who became the first man to hoist the Cup on the Smashville ice. The win cements his legacy as a three-time Stanley Cup champion and leader of the first repeat champs since the 1997-98 Red Wings.

Meanwhile, Predators' players looked to come to grips with a run that felt like destiny until Hornqvist's goal bounced off his old Nashville roommate Pekka Rinne's back and in the net.

It was the only one of the 28 shots Rinne faced that got past him as he returned to his normal dominant self on home ice. Rinne and the Preds falling to 9-2 at home this postseason despite a spirited effort while facing elimination for the first time in this two month playoff run.

It looked like Nashville struck first, early in the second period, when Colton Sissons poked in a loose puck in the crease after Filip Forsberg's shot trickled past Matt Murray. But the goal was waved off because of an inadvertent whistle when the official thought Murray had possession of the puck.

It was the correct call by rule, but a brutal break for the Predators, who finished the series without a goal in the final 123:23. It was also a bad look for the NHL that has replay review for offsides calls, often irrelevant to the play, but can't correct an officiating blunder that costs a team a sure goal.

It was the start of a frustrating night for Sissons, who was stopped moments later on a breakaway by Murray and watched a shot go off the post late in the third period when the game was still scoreless.

Those were shots that had to count for this Predators team, playing without top line center Ryan Johansen or winger Kevin Fiala, and with defenseman Ryan Ellis severely hobbled, to have a chance.

It was a valiant effort by a young team clearly on the rise. But it wasn't enough against the game's best player in Crosby and the league's top young goaltender in Murray, who now has led his team to two Stanley Cups while still being classified as a rookie after being called up late last season.

This is the Penguins time, the Predators are forced to begin their quest all over again.