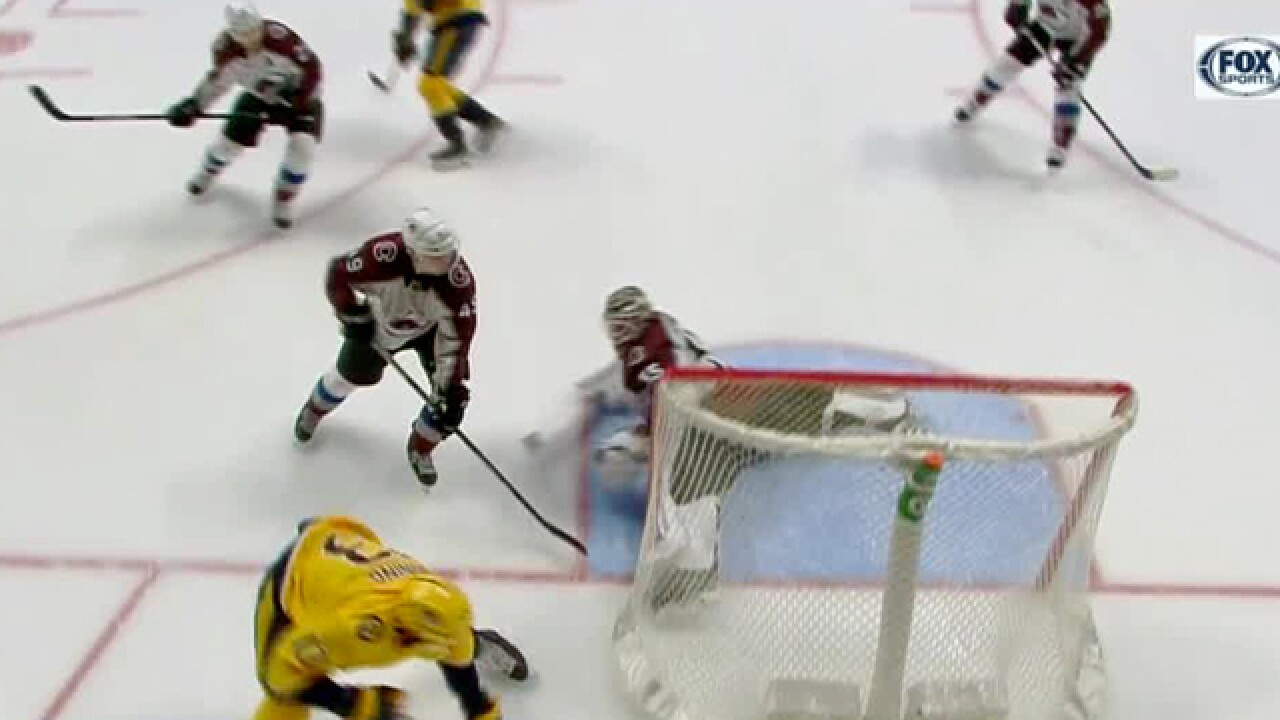 Bridgestone Arena was roaring and the Predators were leading 1-0, less than 5:00 away from punching their ticket to round two. And then the unthinkable happened. The eight-seeded Avalanche scored two goals in 2:43 to win 2-1, leaving 17,500 gold towel waving fans in stunned silence.

The shocking reversal puts on hold any thoughts of a heavyweight round two showdown between the top two teams in the NHL this regular season. The Jets advanced with a 4-1 series victory over the Wild earlier Friday night, but it was the Predators that slipped up when you least expected it, where you least expected it, and now have to get back on a plane Saturday for a game six in Colorado on Sunday.

The Predators were fast, they limited their penalties, and peppered third-string Avalanche goaltender Andrew Hammond with 45 shots on the night. But only one managed to get by him, a rebound that actually bounced off Nick Bonino’s skate for a 1-0 lead with 9:42 left to play.

It seemed like that would be enough. This, after all, is the reigning Western Conference champion and President’s Trophy winner facing the last team to get into the playoffs. The time on the clock seemed like just a formality.

But the Avalanche have proven in this series that nothing can be taken for granted in the Stanley Cup Playoffs. Nathan MacKinnon continued his splendid play by dicing up a tired Preds unit to find a wide open Gabriel Landeskog just outside the crease for the tying goal with 4:11 left.

Even then it seemed like the Predators were getting the better of play, humming around the Avalanche net, only to be turned away time and time again by Hammond, a guy once given the nickname the “Hamburglar” during a splendid run of play in Ottawa.

With the Preds pressing in the offensive zone, Colorado got an opportunity for a counter attack and Sven Andrighetto pounded in a rebound for the game-winning goal with just 1:28 to go, subduing the party like atmosphere inside Bridgestone Arena for much of the third period.

The Preds frantically pressured for a tying goal in the final 88 seconds but the Hamburglar denied one last flurry to help the Avs steal game five in Smashville.

It was just Colorado’s second win over Nashville in 15 tries, but also its second in five nights, and that’s what matters at this point. The Predators dominance of the Avalanche has disappeared in this series, and by now it’s clear they will have to earn their spot opposite Winnipeg in round two.

This is the first time in six tries that a Predators team has failed to close out a series on home ice, though they may get another crack at it Tuesday. If the Predators don’t rebound to win Sunday inside a revved up Pepsi Center it will set up an almost hard to comprehend game seven in round one.

That was something no one even inside the Colorado dressing room would’ve predicted eight days ago, but that is the unpredictability of the Stanley Cup Playoffs that was on full display during the final minutes of game five Friday night.

The Predators were the best team in the NHL this season and may still be the Stanley Cup favorites. But right now, they just need to figure out away to eliminate these annoying Avs once and for all.

It’s the Predators first loss ever in six opportunities to close out a series here in Bridgestone Arena.

And it now means they’ll need to go on the road and win game six Sunday to avoid a game seven in round one back here Tuesday night.