Predators Respond With 2-1 Win In Game 4 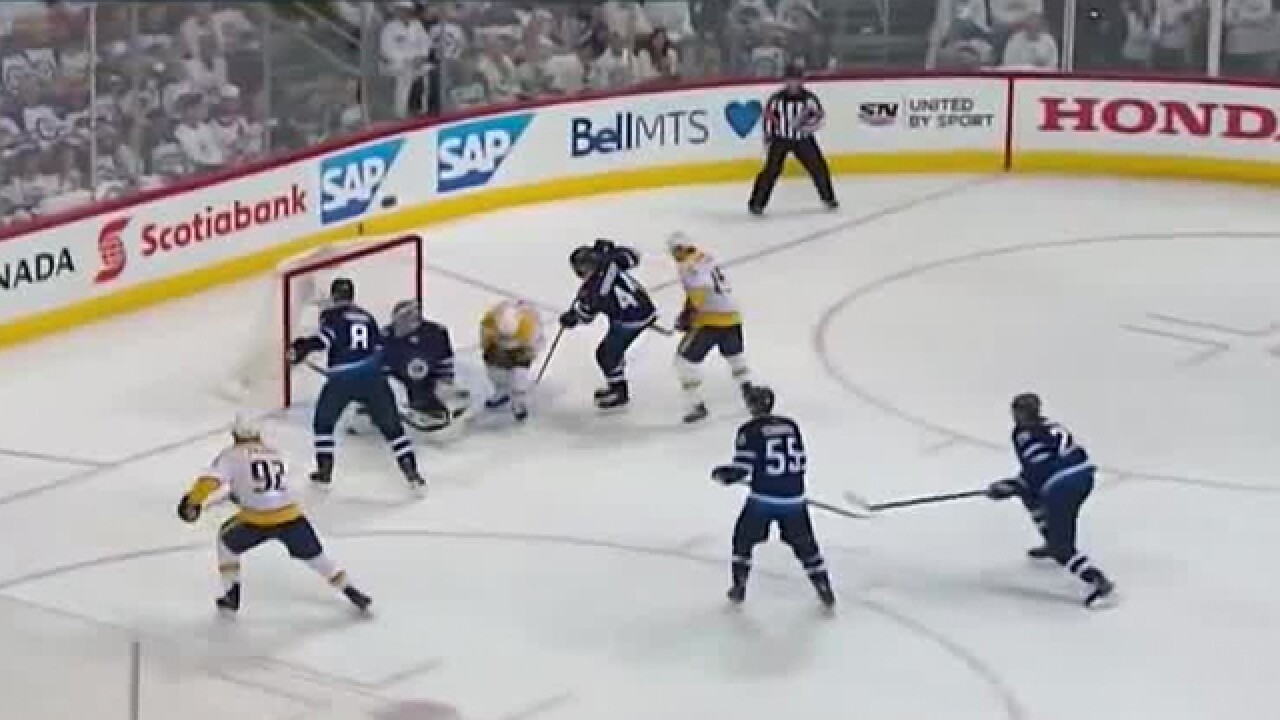 Count the Predators out at your own peril. Two days after blowing a 3-0 lead in a 7-4 loss to the Jets, the Preds rebounded to even this best-of-seven second round slugfest at 2-2.

This shouldn’t be surprising. These Predators, President’s Trophy winners after the best regular season in the NHL, have responded to adversity all year long. And in the playoffs they’ve been at their absolute best coming off of losses.

Get embarrassed in Colorado in a 5-3 loss in game three of round one and the Predators bounce back with a convincing 3-2 win on the road in game four. Cough up a 1-0 lead and lose in the final 5:00 of game five and they responded with a 5-0 series clinching victory in game six against the Avalanche.

It’s continued in this series. After losing game one at home to the Jets, the Preds responded to take game two in double overtime, and Thursday they displayed the heart of a champion as they evened this series up.

For nine playoff games the Predators have been looking for a full 60 minute effort, and finally in game four they found it. A defense buoyed by the return of Yannick Weber cut down the time and space of the Jets’ stars as the Preds pitched a shutout for more than 59 minutes.

Pekka Rinne has taken unjust criticism in this series. He had just an .890 save percentage through three games, but much of that was due to the defense in front of him.

Despite calls for a goalie change, Nashville stuck with Rinne and he rewarded it for the loyalty, stopping 32 of the 33 shots he faced on the night. He may have made the save of the playoffs in the first period, blocking a shot from the slot and then turning away a rebound with the handle of his stick.

A short time later the Predators’ fourth line continued its productive series when Mike Fisher won a faceoff in the offensive zone and Ryan Hartman beat Connor Hellebuyck for a 1-0 lead.

The Predators added to their lead in the second period when P.K. Subban scored on the power play for the third straight game. Subban slid down in the slot and ripped a shot by a screen from the always prominent net front presence of Viktor Arvidsson for the goal.

The Jets tried to press their way back into the game in the third period, urged on by another loud whiteout at Bell MTS Place, but the Predators kept their cool and defensive discipline throughout the third period.

Subban took a cross-checking penalty with just over 2:00 left leading to a Patrick Laine goal that cut it to a one goal lead, but Rinne and the Preds closed it out, sparking a happy celebration from the visitors north of the border.

So now this heavyweight showdown has been reduced to a best-of-three series with two of those three games coming at Bridgestone Arena.

The Predators once again showed the mettle of a championship contender, bouncing back from disaster in game three to regain home ice advantage. And they may have figured out how to play against the Jets with a more deliberate tempo and style that caused the hosts problems.

Earlier Thursday people were wondering if the Predators could win another game in this series, fearing that they had met their match in an explosive Jets team. But Thursday night the Preds answered all their critics, responding yet again for a critical win.

And now Nashville can move into the driver’s seat with a win at home in game five Saturday night.

Count them out at your own peril. These Predators know what it takes to win in the Stanley Cup Playoffs. Someone is going to have to beat them four times to derail their quest for a first ever championship.

The Jets are plenty good enough to do just that. But as we saw Thursday night, the Predators are totally capable of fending them off, too.

It’s been a whale of a series so far. On Thursday, with everyone counting them out, the Predators finally displayed the effort it’s probably going to take to win it.