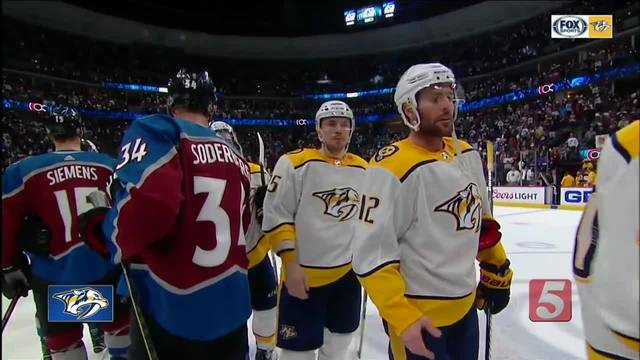 It took six games, but this was the Predators we were all expecting. Fast, crisp, and determined in a 5-0 win in game six Sunday night that clinched a 4-2 series win over the pesky Avalanche. 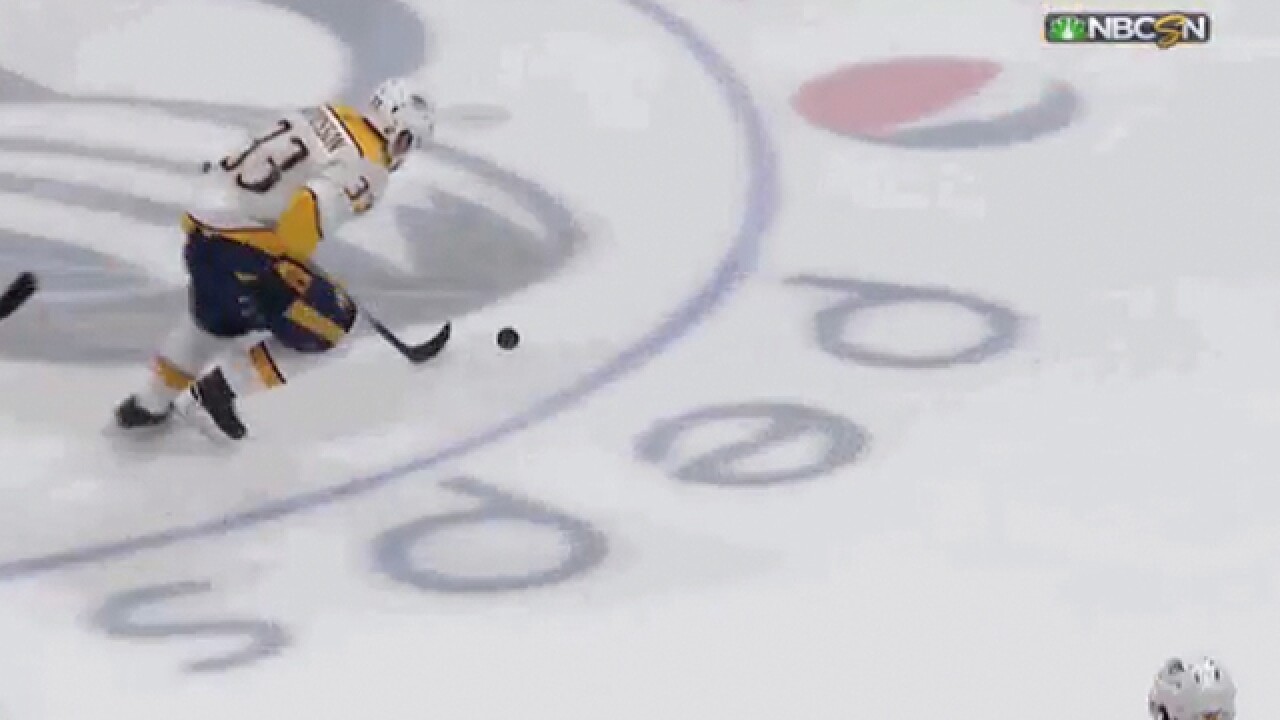 It took six games, but this was the Predators we were all expecting. Fast, crisp, and determined in a 5-0 win in game six Sunday night that clinched a 4-2 series win over the pesky Avalanche.

This looked like the team that dominated the NHL in the regular season with 53 wins on the way to winning the President's Trophy. A team that would like its chances against anyone in this tournament.

Viktor Arvidsson set the tone early, delivering a big time hit on Avalanche superstar Nathan MacKinnon early on, delivering a message that the Preds were determined to put this series to bed after Friday's stunning collapse at home in game five. It looked like Colton Sissons had a goal to draw first blood about 7:00 into the game, but it was waved off for incidental contact with the goaltender. But the Predators were not going to be denied. Not on this night, and not in this series.

Just 16 seconds after Sissons' apparent goal was waved off, Mattis Ekholm's blast from the edge of the slot beat Andrew Hammond and opened the floodgates. It was the first goal of the series for the Preds' defensemen, a unit that led the league in points from the blue line during the regular season.

It also may have exposed Hammond, who made just one start all season before posting a career-high 44 saves in a 2-1 game five win. Famously dubbed "The Hamburglar" for his exploits in Ottawa, Hammond helped the Avs steal one in Smashville on Friday, but he was caught and convicted Sunday night by a merciless Nashville attack that just kept coming and coming.

Austin Watson continued his phenomenal series by tapping in an easy rebound of a Sissons shot off the pipes a few minutes later for a 2-0 lead.  Watson has four goals in the series, tied for the team lead with Filip Forsberg, who scored on a quick rush early in the second period for a 3-0 lead. By the time Nick Bonino's shot from the slot trickled past Hammond midway through the period the Predators had complete control.

The line of Bonino, Watson and Sissons often went head to head with the star-studded top line of the Avalanche, and largely got the better of the matchup. That was never more apparent than Sunday when they had their hands in on three goals while MacKinnon and Avs' captain Gabriel Landeskog finished -3 and -4 respectively for the night. For the series, the Bonino, Watson, Sissons line scored nine goals and produced 19 points compared to seven goals and 18 points from the Avs' stars.

The emergence of that line took the pressure off the Predators' top line and made up for the struggles of the team's second line in this series. And that's the hallmark of a great time. Colorado could only go as far as its stars could go by themselves, while Peter Laviolette has the luxury of just rolling another crew of skaters over the boards for the next shift, expecting them to get the job done.

While MacKinnon and Landeskog logged well above 20:00 of ice time per night in this series, Nashville's top stars weren't taxed in the same way as evidenced by Arvidsson looking like he was shot out of a cannon as he split two defenders and then beat Hammond for a back breaking goal that made it 5-0 early in the third.

Oh yeah, and then there's Pekka Rinne. The biggest of all the stars on this team and the goaltender that will win the Vezina Trophy for the first time come June. For much of this series he was good, but not necessarily up to the elite standard he established for himself during the regular season. In game six, he stopped all 22 shots he faced to pitch yet another playoff shutout and help the Predators advance.

The clinching win came two nights after the Preds and their fans had hoped, but perhaps the Avs even did them a favor with their late game rally Friday night. A game six on the road and the pressure of a tougher than expected opening round series forced Nashville to find another level.

That will be necessary to sustain in a round two to showdown with the Jets, a heavyweight bout between the top two teams not just in the Central Division, but the entire NHL by points this season.

The Predators will need their best against the Jets. Fortunately for them they seemed to find their best just in time to dismiss the Avalanche. Who cares that it took six games to do it?