Preds Rally Past Flyers On Banner Night In Smashville 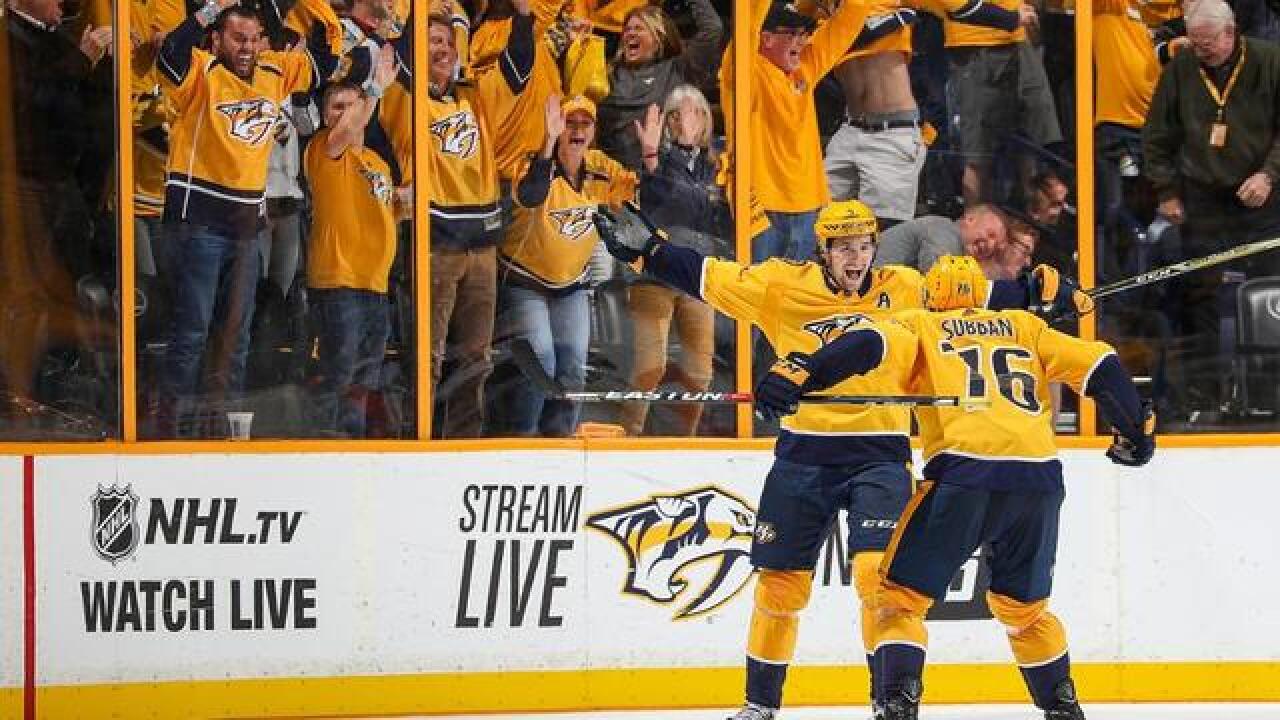 Copyright 2017 Scripps Media, Inc. All rights reserved. This material may not be published, broadcast, rewritten, or redistributed.
&lt;p&gt;Filip Forsberg celebrates with P.K. Subban after scoring the game-winning goal in the Predators' 6-5 comeback win over the Flyers Tuesday night at Bridgestone Arena.&lt;/p&gt;

In case anyone forgot how fun hockey in Smashville is in the nearly four months since the Stanley Cup Final, the Predators brought us a vivid reminder Tuesday night in their home opener, scoring twice in the final 1:17 to beat the Flyers 6-5.

Scott Hartnell, playing his first game in Nashville since rejoining the Predators after a decade away, scored on Filip Forsberg's feed on a 5-3 Power Play to tie the game. Philadelphia then elected to challenge that goal for offsides but lost, and under new rules this season was assessed another minor penalty, gifting the Preds another 5-on-3 opportunity.

Right as the first penalty expired, P.K. Subban shoveled the puck over to Forsberg who fired a shot top shelf past Brian Elliott for the game-winner with :35 left. It secured the Preds' first victory of the season and capped a spectacular night at Bridgestone Arena in which the team celebrated it's Stanley Cup Final run last season before the game.

It was Forsberg's second goal of the night after he started the third period comeback with a beautiful goal on a great outlet pass from Ryan Johansen with just over 13:00 left.

The comeback was necessary because Nashville surrendered five consecutive goals in the span of about 17:00 after taking a 3-0 lead on Nick Bonino's first goal in gold midway through the second period.

But as we saw so many times during that magical playoff run last season, the Predators are never out of it at home. And that was clear with another furious third period rally, aided by the Flyers' penalties.

"They obviously played a big part, but at the same time we earned them." Forsberg said after the game. "We played hard in the third and definitely earned those calls. Obviously, a crazy comeback and a win, so it was good."

The night began with former Predators' captain Mike Fisher taking the ice to a standing ovation alongside current captain Roman Josi, who missed Tuesday's game due to injury, to unveil the team's Western Conference Champions banner. That banner becomes the first to hang in the rafters in the team's 20-year history.

There were player introductions and a video tribute to the magical run that reminded of the incredible feeling that surrounded this team and the energy in the city that was on display for the entire hockey world last summer, when screaming sellout crowds blared through tv sets and the thousands of gold-clad onlookers that packed the plaza and surrounding downtown area outside the arena attracted the eyeballs of the casual viewer the sport of hockey generally struggles to connect with.

"I was looking forward to it, but I wasn't at the same time because of the emotions of it and missing it," Fisher told reporters after the ceremony. "But the banner kind of brought back some special memories of the year, and watching the video and seeing the guys again was pretty cool."

That team, led by Fisher, will be remembered in these parts for a long time. But this season's team wants to create a little history of it's own, and once the puck dropped was determined to turn the page from last year's run and move on to the business at hand, which was securing two points with the team's first win of the year.

They started quickly with Craig Smith's power play snipe coming just over 3:00 into the game. When Hartnell and Bonino scored early in the second, it looked like the Preds might take a victory lap on banner night.

They had to fight harder than expected thanks to their mid-game lapse, but the Predators found a way to get their first victory of the season on a special night in a special place. And it's hard to imagine too many teams coming in here over the next 40 home dates and spoiling the fun.

The Predators returned to Smashville Tuesday and returned to their thrilling and, at times, heart stopping ways. Most importantly they returned to winning.

After four long months away, hockey is back. Isn't it fun?