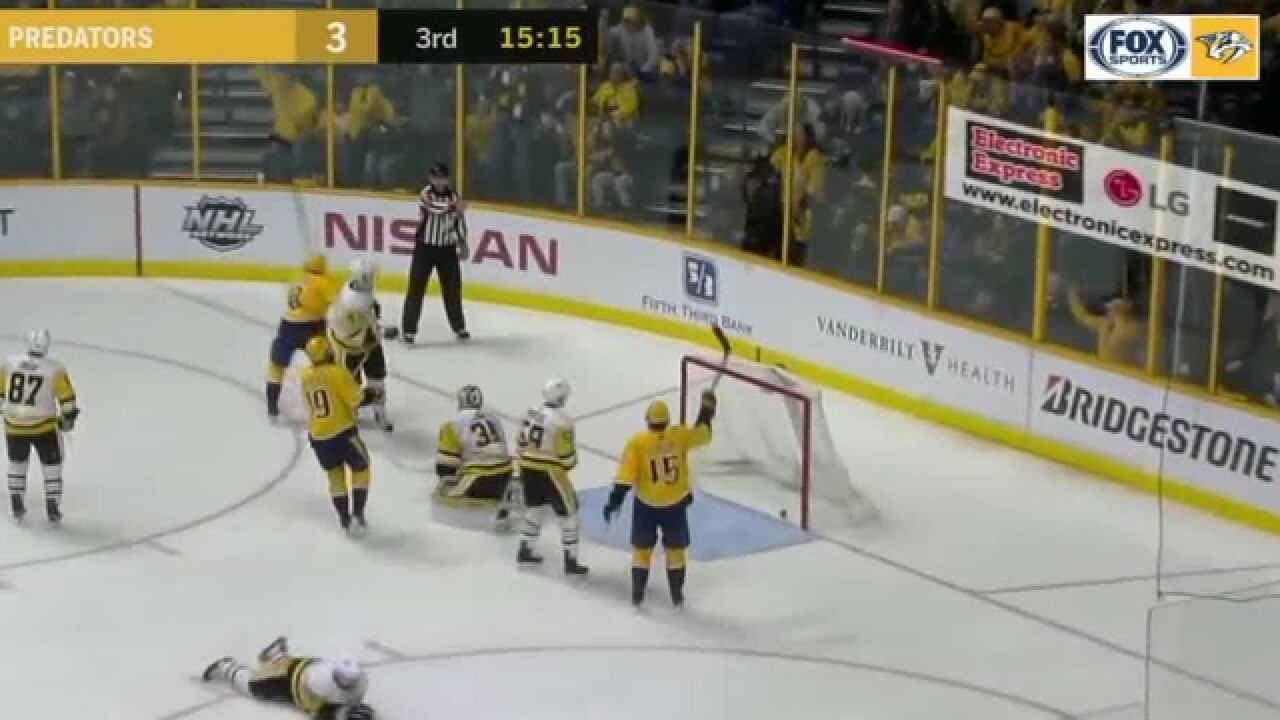 Exactly five months to the night that they watched the Penguins skate with the Stanley Cup on their home ice, the Predators exacted a small token of revenge Saturday with a 5-4 shootout win.

Kevin Fiala and Filip Forsberg both scored in the shootout and Kris Letang's attempt to keep the game going sailed wide of a flailing Pekka Rinne in goal as the Preds won their fourth straight game.

"We all knew who the opponent was and what happened," Predators head coach Peter Laviolette said after the game. "Nothing's going to change from last year, but we know they're the two-time Stanley Cup champions and our guys were ready and played hard."

It was clear from the start these two teams haven't forgotten one another from their six game slugfest in early June. The physicality of this one felt more like a November SEC football game than a November hockey game at points as the Smashville crowd lustfully cheered every hit and shot from the home team.

But while the matchup was the same from the Stanley Cup Final, the Predators are quick to point out that this is a new year and a new team. That was evident at the start of the second period when Nashville turned a 1-0 deficit into a 3-1 lead with three goals in 3:28.

It was the newest Pred, Kyle Turris, acquired in a three-team trade last Sunday, that got things going. The 28-year-old center got his first goal in gold, taking a pass from Miikka Salomaki and depositing it in the back of the net.

"It just felt great to get out there with the guys and in this crowd," a smiling Turris said after the game. "I had been looking forward to this."

After the Penguins rallied to tie the game at 3, Calle Jarnkrok patiently find space in the slot and fired a shot past Tristan Jarry for a 4-3 lead. But Brian Dumoulin tied things again with a goal with 12:17 left to play in the third.

Both teams had chances to take it in the 3-on-3 overtime segment, but were unable to find the net before the shootout.

The victory doesn't diminish the sting of the loss in June that marinated with Preds' players through the short offseason and into Saturday night, but it continues the team's recent success with another two point night following three straight wins to close their recent road trip.

And it's a sign that this Nashville edition has the potential to make another run at hockey's grand prize.

At least for one night, it felt like the Stanley Cup Final again in Smashville, and this time the home team came out on top.