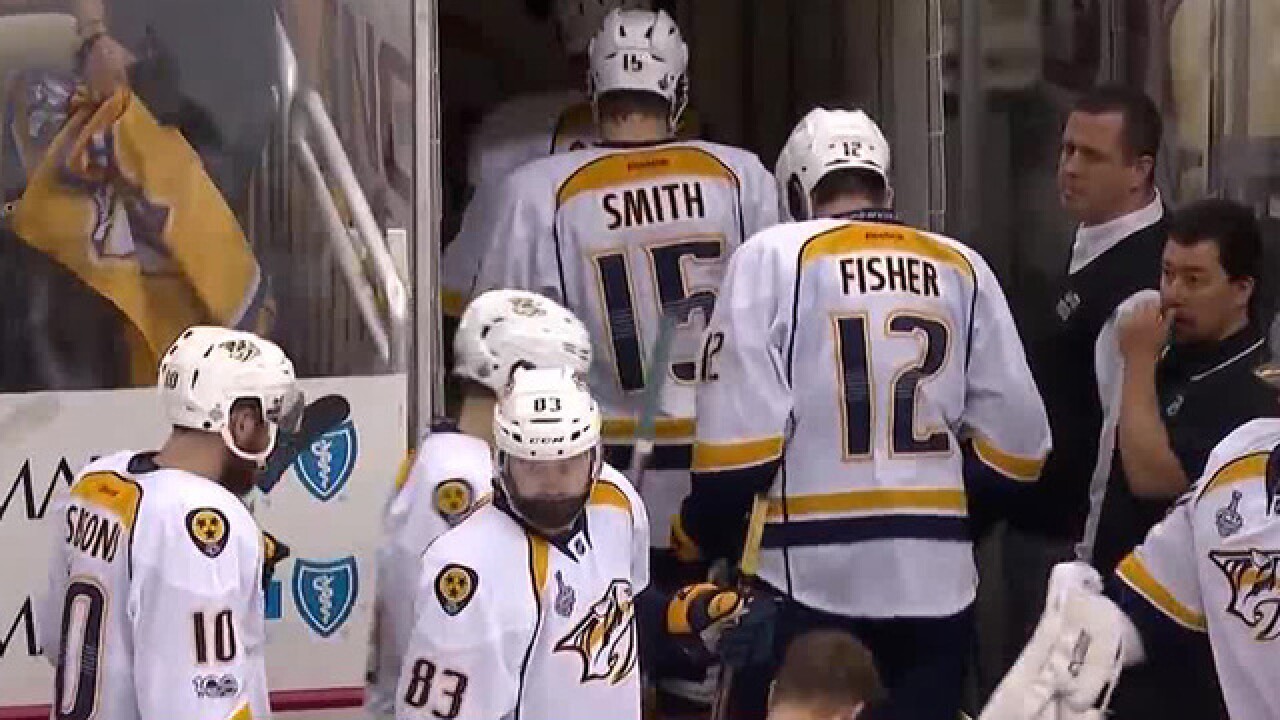 Home ice advantage has meant everything in this Stanley Cup Final, the Penguins capturing the first two games in the friendly confines of PPG Paints Arena and the Predators holding serve with a pair of wins at a raucous Bridgestone Arena.

Which leads us to a pivotal game five Thursday night at 7 p.m. Does the home ice trend continue? Or can the Predators build off dominant efforts in games three and four and break through on the road.

That's the central question to this series right now. Can either of these teams win on the road or will home ice carry the day?

And the winner of game five will sit in a glorious position in what has now been reduced to a best-of-three series for Lord Stanley's Cup.

"We know this game we're going to have to be at our best, there's no question," Predators captain Mike Fisher said Wednesday. "We know who we're facing, in their building. We got to be ready to be at our best. We know it's an exciting challenge. I think you'll see we'll be ready for it."

The Predators certainly looked ready in games three and four, outscoring the Penguins 9-2. It was the 60-minute effort the Preds needed to start the series in Pittsburgh when they outshot and outchanced the Pens in each of the first two games only to fall short. A couple lapses, one in each game, making all the difference for a star-studded Penguins team that's as opportunistic as anyone in the league.

Pittsburgh scored three goals in a 4:11 stretch at the end of the first period of game one, building a 3-0 lead on the way to a 5-3 win. Then in game two, the Penguins broke open a 1-1 game with another three goal flurry over the first 3:28 of the third period.

"We know we can play better in this building. We know we're going to have to," Fisher said. "This is a team that Games 1 and 2, there were a few minutes where we liked our game for some of it, then other parts of it, they took over. They capitalized. We did a better job of managing the game that way in Games 3 and 4."

The biggest factor for the Predators in game three and four was the way goaltender Pekka Rinne regained his form. Rinne had never beaten the Penguins in 11 career starts and had allowed four goals in each of the first two games in Pittsburgh.

But at home in Nashville he rebounded from those shaky efforts to stop 50 of the 52 shots he faced to improve to 9-1 at home in this season's playoffs.

Still, Rinne is 0-5 in his career in Pittsburgh. A goose egg in the win column that will obviously have to change if the Preds are to capture their first ever Stanley Cup.

"We're playing really well these four games. I mean, it's a dangerous team. Two teams that skate well up and down the ice," Rinne said Wednesday from the team hotel. "Those two first games, that was the one thing we were a little bit disappointed about. We generated a lot of chances. They didn't get that many, but still they won those two games. At home we played two strong games."

It's Rinne and the Predators' ability to bring that level of effort and execution to the road that will determine this series.

Bottle their play from games three and four and steal game five in Pittsburgh and the Preds will have the chance to close out this championship run at home Sunday in game six in front of an ear-splitting home crowd that's left happy 13 of the last 14 postseason games, and probably about 200,000 revelers outside the arena as history could intersect with the final night of CMA Fest.

It will either be the biggest day in Nashville history or a game the Predators must win to stave off elimination and force a game seven back in Pittsburgh next Wednesday.

Either way, one thing's for sure. The Preds have to solve the Penguins' home ice advantage at some point to become champions.

And there's no better time to do it than game five.