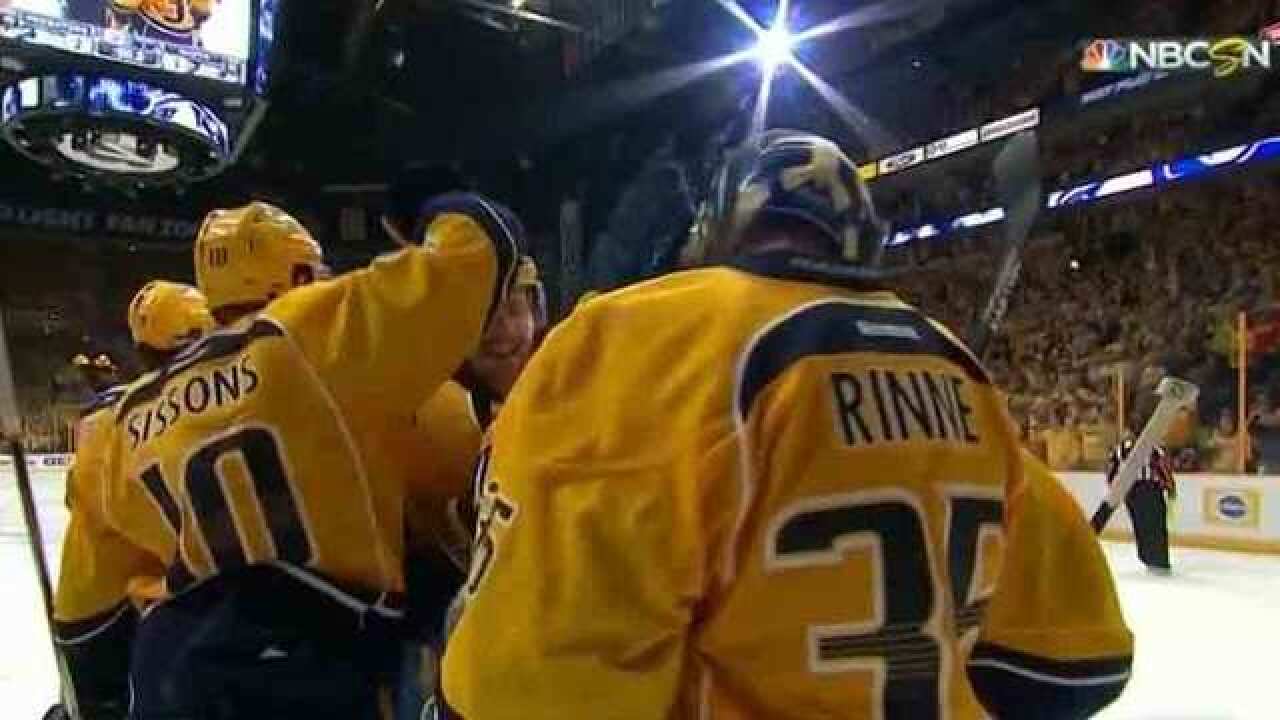 No one gave them a chance. That didn't matter to the Predators, who believed in themselves in a 3-1 win against the Ducks in a pivotal game five of the Western Conference Final.

The victory puts the Predators one win away from their first ever Western Conference title, something they can earn Monday night in game six in Smashville.

"The guys played great tonight," Predators head coach Peter Laviolette said. "We knew we were in for a tough test. They're a good hockey team, and certainly with what's happened in the last 48 hours we knew we'd have to come out with a big performance. New guys were in the lineup and they had to step up and play big games and I thought our guys played terrific."

Playing without their top two centers, Ryan Johansen and Mike Fisher, the Predators delivered a spirited effort Saturday night in Anaheim to reclaim the series lead.

There was a sighting of Playoffs Colin Wilson, who scored just his second goal of this postseason, evening the game late in the second period.

Pontus Aberg scored the game-winner on a rebound with 8:59 to go, his first career playoff goal.

"He was terrific," Laviolette said. "We need that. We need our young players to step up. We're obviously minus some bodies right now and if we're going to keep moving on, these guys are going to have to contribute."

Aberg, who played 56 games this season in minor league Milwaukee, became the 16th different Predator to score a goal in the playoffs. He is the 10th different guy to score a game-winner in the Preds' 11 postseason victories.

Austin Watson scored a three-quarters ice empty-net goal in the final minute to seal the win.

Pekka Rinne continued his brilliant playoff run, stopping 32 of the 33 shots he faced in game five, keeping the Preds in it early and preserving the lead late. He's now allowed just 25 goals in 15 postseason games this spring.

Due to the injuries the Predators were forced to put together new lines in game five, but their centers stepped up.

Jarnkrok filled in admirably for Johansen on the team's top line, and Colton Sissons delivered an assist on Wilson's tying goal.

"I thought Jarny was really good tonight," Laviolette said. "Sissons was a warrior tonight, he played so hard."

Sissons finished with a plus-two rating on the night in 19:24 of ice time, helping fill the void left by the losses of Johansen and Fisher.

"Just stepping up," Sissons said of his effort. "We still had full belief that we were going to win this hockey game, and moving forward win this series. We just needed guys to elevate their game, even if you're playing great already, just notch it up another 10 percent. We need guys like Gaudreau, who played fantastic tonight, Pontus who scored a big goal, Pekks was awesome. We answered the bell, and we've got one more to go."

Vernon Fiddler was also solid in his return to the lineup. The veteran center played an active game in both zones and was solid in the faceoff circle, particularly with a pair of huge defensive zone wins late in the third period.

But the performance of the night belonged to Frederick Gaudreau. The 24 year-old-center, who had played just nine career NHL games, took advantage advantage of his opportunity by playing the game of his life. Gaudreau won 10 of 14 faceoffs against the best team in the circle in the NHL, looking completely ready for his first career playoff appearance.

"For Gaudreau to go in there in those circumstances, having not really played here all year and go into a game that's so important to our team and deliver the game he did, you can't say enough about it," Laviolette said. "I thought he was terrific in the faceoff circle, defensively, offensively, he was heavy on the puck."

In all, the Predators lost the faceoff battle 31-27, but held their own especially on some key defensive zone battles late in the game.

This was the ultimate team effort, and it delivered a victory that returns series control and home ice advantage to the Preds.

Now they return home Monday night with a chance to close out the series in a place they've won 10 of their last 11 playoff games and all four series close out games in team history.

It's a golden opportunity made possible by a gutsy effort in game five in sunny So Cal.

This team may be wounded, but they are far from out of it. These Predators relish the role of underdog.

And Saturday night they took another step in a remarkable playoff run towards their first ever Stanley Cup Final.

And no one should be counting them out now.