One year ago today Vanderbilt captured the College World Series title with an 8-2 victory over Michigan, capping a remarkable season. 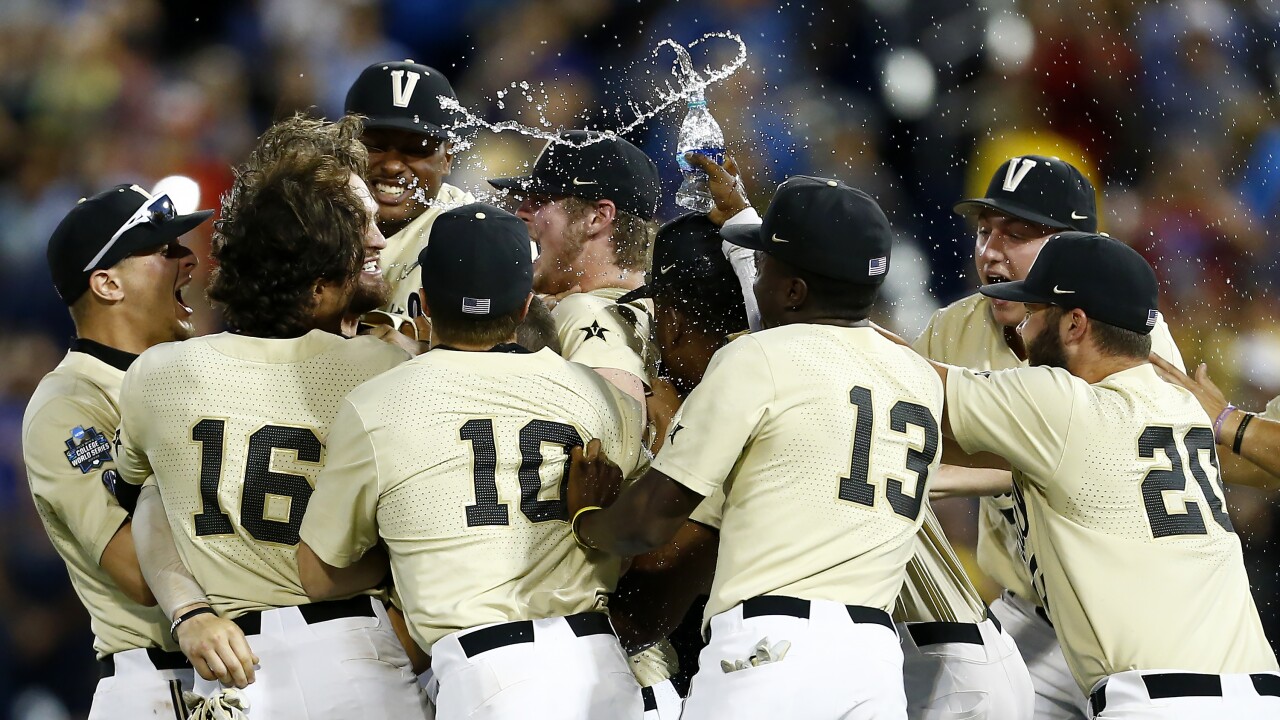 NASHVILLE, Tenn. (WTVF) — As the preseason number one team in the nation, expectations were high for the Vandy Boys entering 2019. They more than lived up to them.

One year ago today Vanderbilt captured the College World Series title with an 8-2 victory over Michigan, capping a remarkable season.

With a veteran lineup loaded with future pros like J.J. Bleday, Austin Martin and Pat DeMarco, and a pitching staff of power arms like Mason Hickman, Kumar Rocker and closer Tyler Brown, Vanderbilt would achieve all those things. The Commodores won a SEC record 59 games and pulled off the rare conference double, capturing both the regular season and tournament championships. It was the first time they had completed the sweep since 2007.

Vandy then rolled through regional play and battled back from a game one loss against Duke in the Super Regional, thanks in large part to Rocker’s 19-strikeout no-hitter in game two, to reach the College World Series for the first time since 2015.

“For the first two days they just enjoyed Omaha,” Corbin said. “But once the opening ceremonies were concluded it was like, ‘alright, here we go. Let’s go. Now it’s business.’”

Vanderbilt would beat Battle of the Barrel rival Louisville in its opening game in Omaha, then take out SEC foe Mississippi State before meeting the Cardinals again. DeMarco’s top of the ninth base hit gave the Commodores their first lead of the game and proved to be the game-winning hit in a 3-2 victory that sent them to the finals against Michigan.

After an opening game loss, Corbin once again handed the ball to his freshman phenom Rocker. And just like against Duke in the super regional, Rocker delivered a gem. He allowed just one run on three hits while striking out 11 over 6 1/3 innings of work in a 4-1 win.

“His progression throughout the year was amazing,” Corbin said. “From a guy who started the year with his first game in Arizona and only pitching an inning and a third, to a guy that was pitching no-hitters in the Super Regional and got two wins in Omaha, that’s outstanding work, obviously. He was the College World Series MVP.”

That victory set up a decisive game three. Hickman threw six strong innings and DeMarco jumpstarted the offense once again with a second inning home run. Stephen Scott drove in a pair of runs as Vanderbilt took control of the game.

DeMarco caught the final out in centerfield to seal an 8-2 win and spark a wild celebration. Corbin embraced his coaching staff and then family in the dugout, but then turned his attention to the celebration of his players that had dogpiled on the mound in front of more than 20,000 fans at Omaha’s T.D. Ameritrade Park.

“It is (about) the boys,” Corbin said. “It’s what they do to put our program in position and to put themselves in a position to have success.”

The pinnacle moment was especially sweet for this Vandy team full of upperclassman, many of whom were in or already connected to the program four years earlier when star freshman Donny Everett died in a tragic drowning accident on the even of the NCAA Tournament. Grief-stricken, the 2016 Commodores lost their first two tournament games, and the dark cloud of Everett’s sudden passing hung over the program for some time.

Everett’s parents remain close to the program and were in Omaha to watch the CWS. They joined the team on the field for the championship celebration and trophy presentation.

“To go through what may have been the toughest situation that they’ve ever gone through and then be able to circle back and enjoy something that few people enjoy (is incredible),” Corbin said. “And to see the Everetts be a part of that (was) icing on the cake.”

It was an unforgettable night that provided memories that will last a lifetime. And cemented a Vanderbilt team that started the year no. 1 and finished the season no. 1 as one of the greatest teams in college baseball history.

“For them to do what they did from start to finish may never be done again,” Corbin said. “I just think it’s a rarity in college sports to have that type of consistency from the day you start to the day you finish.