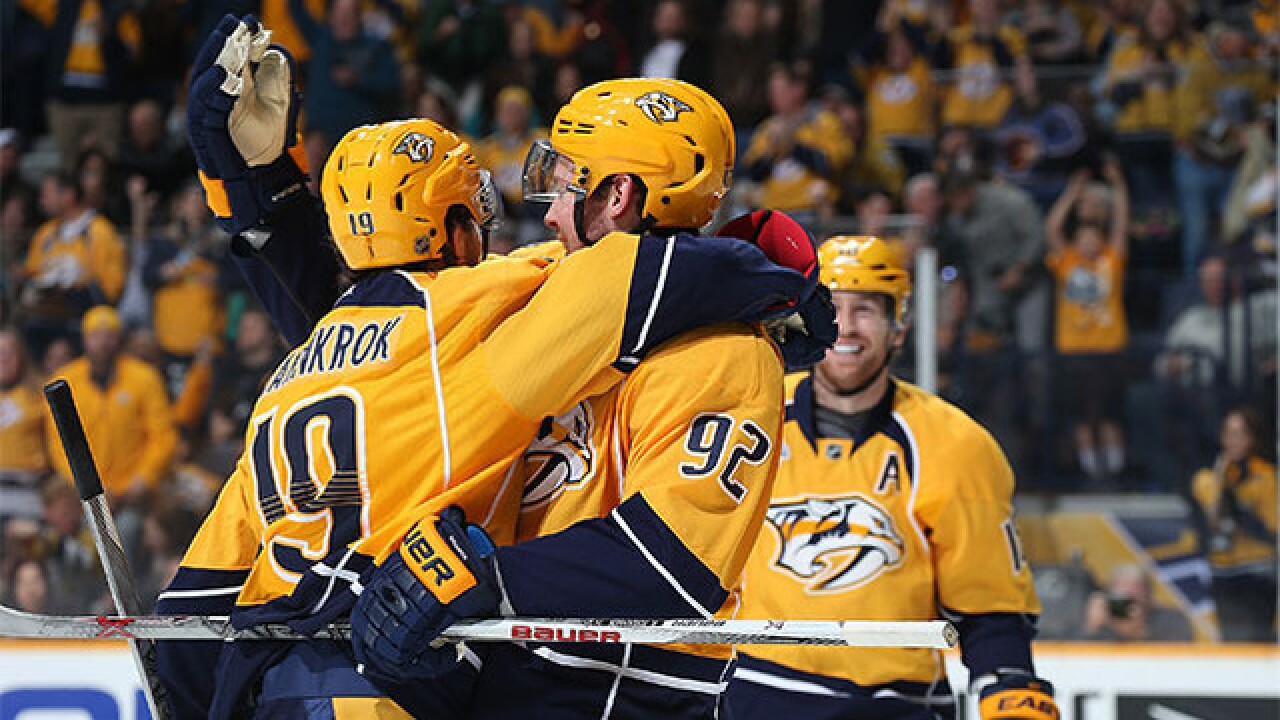 NASHVILLE, Tenn. (WTVF) — Ignore the nearly triple digit temperatures outside. Hockey is back. The Predators officially drop the puck on the 2019-20 season Thursday night against the Wild in Smashville.

Expectations remain high for a team that is coming off consecutive Central Division championships, as much of the nucleus of the squad returns. But there have been a few notable changes general manager David Poile and head coach Peter Laviolette hope will make a difference after last year’s team flamed out, losing in six games against the Stars in the opening round of the playoffs.

Gone is superstar P.K. Subban, traded in a salary dumping move to the Devils this summer. In is high scoring center Matt Duchene, looking to give the Predators some more scoring punch.

Those two moves will mean some different looking lineup combinations this season, but the Preds believe it can help them get back on top in a division that boasts multiple presumed Stanley Cup contenders, including defending champ St. Louis, Colorado and Dallas.

Here are five storylines to watch as the season gets underway.

The Predators have had one of the most explosive top lines in all of hockey with Ryan Johansen centering a pair of 30-goal scorers in Filip Forsberg and Viktor Arvidsson. But the team has struggled over the past couple of seasons to find much secondary scoring, leaving a heavy burden on that JOFA line.

The addition of Duchene is expected to change that. The 29-year-old center has twice scored 70 points in his career, including last year when he split time between Ottawa and Columbus. No Nashville player has reached that total since 2007.

Now able to focus completely on meshing with one team after signing a seven-year, $56 million dollar contract this summer, Duchene is expected to bring the Predators a second top tier center. Much like Johansen, he’s a player that can score goals and and create for his teammates.

What the lineup will look like remains to be seen. It appears that Laviolette will start the season by shaking up his top line by putting Kyle Turris or Craig Smith with Johansen and Arvidsson while Forsberg will join Duchene and Grandlund on the second line.

Of course, if things don’t mesh quickly, Laviolette can always reunite the Forsberg with Johansen and Arvidsson on the JOFA line.

WILL TURRIS GET BACK ON TRACK?

Speaking of Turris, all eyes will be on him this season to see if he can find his game once again.

After being acquired in a trade with the Senators two seasons ago, the 29-year-old center has struggled after an initial flurry in the gold sweater. Turris struggled mightily in the playoffs two seasons ago and then had one of the least productive seasons of his career last year.

Many people around the NHL thought the Predators may look to shop him on the trade block this summer, but no deal materialized. Turris also appeared to rediscover his game at the World Championships while serving as the captain for team Canada.

He says he’s looking forward to a fresh start in Nashville this season, and some of the scoring pressure has been taken away with the addition of Duchene. But it will be interesting to see what role he falls into and how he plays to start the season.

If Turris struggles again, the Predators may have no choice but to trade him, even if it means eating some salary.

A NEW LOOK ON THE BLUE LINE

The strength of the Predators roster for years has been its talented defensive corps. But that group will have a new look this season.

The trade of Subban to New Jersey opened up a spot in the team’s top four pairings which is expected to be filled by rookie Dante Fabbro. The 21-year-old played with a poise and toughness beyond his years in 10 games, including the playoffs, last season after finishing a standout college career at Boston University. Now he’s expected to jump full time into a top four role, likely paired with veteran Mattias Ekholm, who himself and a career year last season.

The loss of Subban is a big one, both in the offensive and defensive zones. But the Preds have the talent on their back end to absorb it. And removing Subban’s superstar personality may mean that players like captain Roman Josi and Ekholm finally get their due around the league. Both are top end defensemen that will be expected to carry the load and make sure there’s no drop off in play.

Pekka Rinne is the longest tenured Predators player, and you’d be hard pressed to find anyone more popular in Smashville. But the veteran goaltender will turn 37 this season and there are questions about how long he can continue to play at a high level.

For his part, Rinne has shown no signs of slowing down. He won the Vezina Trophy as the best goaltender in the league two seasons ago and followed it up with another strong performance last season. But Father Time is undefeated and the Predators don’t want Rinne having to play the same intense workload that he did earlier in his career.

Fortunately he won’t have to. Backup Juuse Saros has developed into a solid goalie in his own right. He’s played an increasing role over the past couple of seasons. Expect that to continue this year as we move closer to the day when Saros takes over as the man between the pipes.

Rinne is still the man for now, especially when the playoffs come around. But the Predators would be wise to play Saros even more this season to continue his development and ensure Rinne is healthy and ready to go come the postseason.

The Predators are expected to contend once again for the Central Division title, a playoff spot and make a run after that elusive Stanley Cup. But it won’t be easy.

The Central is loaded once again with the defending champion Blues, a young, but talented Avalanche team, a Stars squad that eliminated the Preds from the playoffs in April, and the Jets, Blackhawks and Wild still talented and looking to reload.

Furthermore, the Western Conference still has proven commodities like Vegas and Sam Jose to contend with, while the record-breaking Lightning look to bounce back from their playoff collapse in a loaded Eastern Conference.

The question is where do the Predators fit in this year? This is a franchise that had never hung a banner until three seasons ago when it made that magical run to the Western Conference Championship. The Preds followed that up with regular season division and conference titles in 2017-18 as well as their first ever President’s Trophy for posting the best record in the league. They will add a fifth banner to the Bridgestone Arena rafters before the opening face-off Thursday to celebrate last season’s division title.

Can they keep the run of success going? It won’t be easy, but this team is more than talented enough to be in the mix for multiple trophies this season. It’s just up to them to go out and do it.