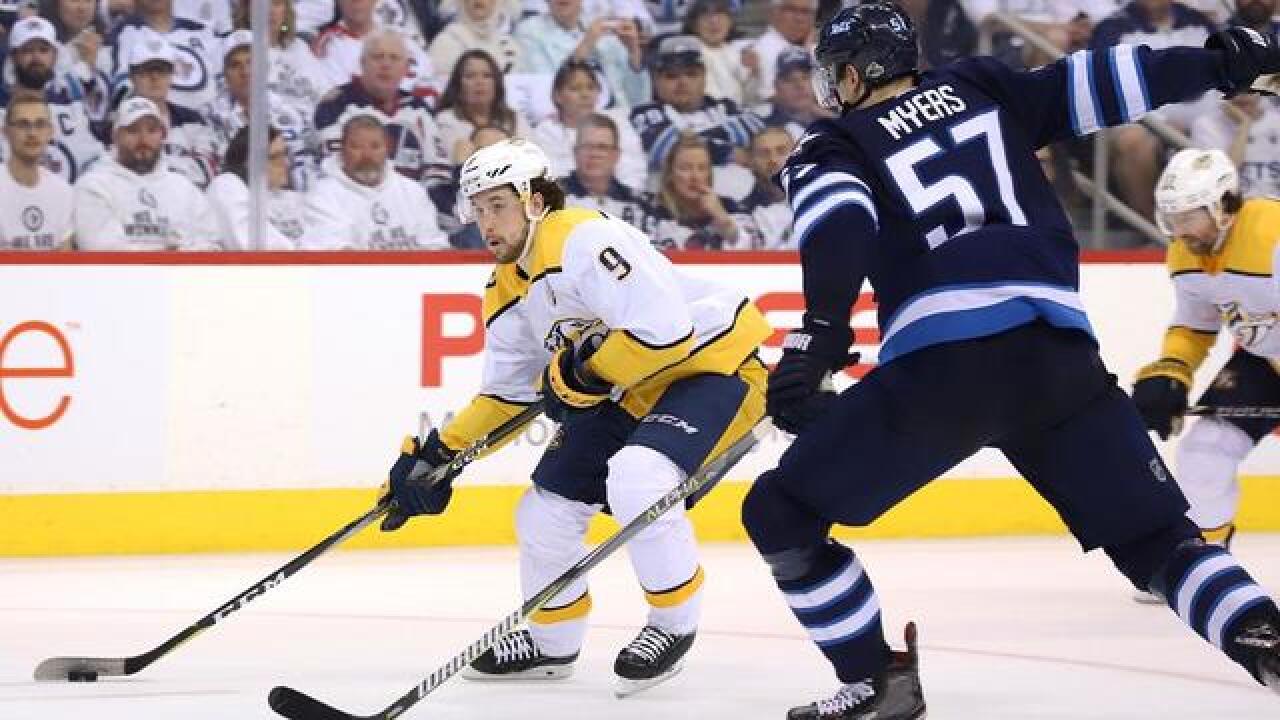 I love my job because it never feels like work. I grew up dreaming of being around sports and here I am, a big kid getting paid to watch and cover games for a living.

But, if I'm being honest, some days are better than others. This week has provided two of those days.

On Monday I boarded a plane, blurry-eyed, sometime during the 5 a.m. hour, bound for Winnipeg and game six. I was prepared for a hockey crazy city, a crazy loud arena and one heckuva hockey game. What I got was an experience I will never forget.

Hockey is Canada's national pastime, but perhaps no place loves the sport more than Winnipeg. It's a way of life in that city that not all that long ago was stripped away from them when the original version of the Jets were moved to Arizona in 1996. I'm told it was as if someone ripped the soul from the city until they landed the Jets 2.0.

Few fanbases can relate to the pain of losing a team, but Nashville can come close. Eleven years ago they were selling season tickets for the team in Hamilton, Ontario before fans and a group of local businessmen stepped up to buy the team and keep them here. So I feel like Smashvillians have a bit of a bond with Winnipeggers as small, hockey crazed markets with perhaps a bit of a chip on their shoulders after being overlooked by the hockey world for so long. As much as we celebrate the wins, it's the losses that actually strengthen our bonds with our teams.

So there I was at the corner of Donald and Graham just outside Bell MTS Place an hour before puck drop of game six and there was nothing but white in every direction. I was told they expected 23,000 fans to stand outside for the Jets chance to move on to the conference final for the first time in city history.

One local media member described it to me as, "literally the most exciting moment in the city's history." You could feel that energy outside, and the roar inside was deafening. When the Jets skated onto the ice the decibel meter read 115, right on par with numbers we've seen in Smashville. To me the debate over which arena is louder is silly. They're both ridiculously loud, unlike any other buildings I've been in around the league.

Call it a tie, which is just good for hockey, as this series has been. Whiteout vs. Goldout, street party vs. plaza party, poutine vs. catfish.

The NHL playoff system unfortunately matched the two best teams in the regular season against one another in round two, so all we could hope for was a series befitting of each team's greatness. That's exactly what we got. These are two heavyweights trading blows in a series that feels far more like it's being played in early June than early May. Heck, it was 30 degrees Celsius (or 86 degrees Fahrenheit) in Winnipeg Monday.

I would've been happy for the many great people I met in the 'Peg had the Jets prevailed Monday in the same way I was so happy for my friends in and around the Predators' organization when they had their big breakthrough last spring. And I will be happy on the days each franchise finally celebrates winning the Stanley Cup. I can already see the crowds lined down Portage and Broadway for the parades.

But, if I'm being honest, I was selfishly happy when the Predators won Monday night because it guarantees us one more game of this series that has been so fun. One more night of these two cities, these two fanbases and these two teams giving us something special.

I have no idea who will win the game, but the ultimate winner is hockey. Predators' fans will be ready to blow the roof of Bridgestone Arena and drown out the music of the honky tonks at the watch party that will turn downtown into a sea of gold of anxious partisans in a similar scene to the one I saw in Manitoba on Monday.

Some 1,300 miles away I imagine there will be another whiteout in Winnipeg and every tv in the city will be on their Jets.

This series has captured the full attention of the hockey world, and tonight Nashville and Winnipeg will share the stage for one last hopefully incredible contest.

The Predators and Jets have given us a game seven. Seriously, how lucky are we?