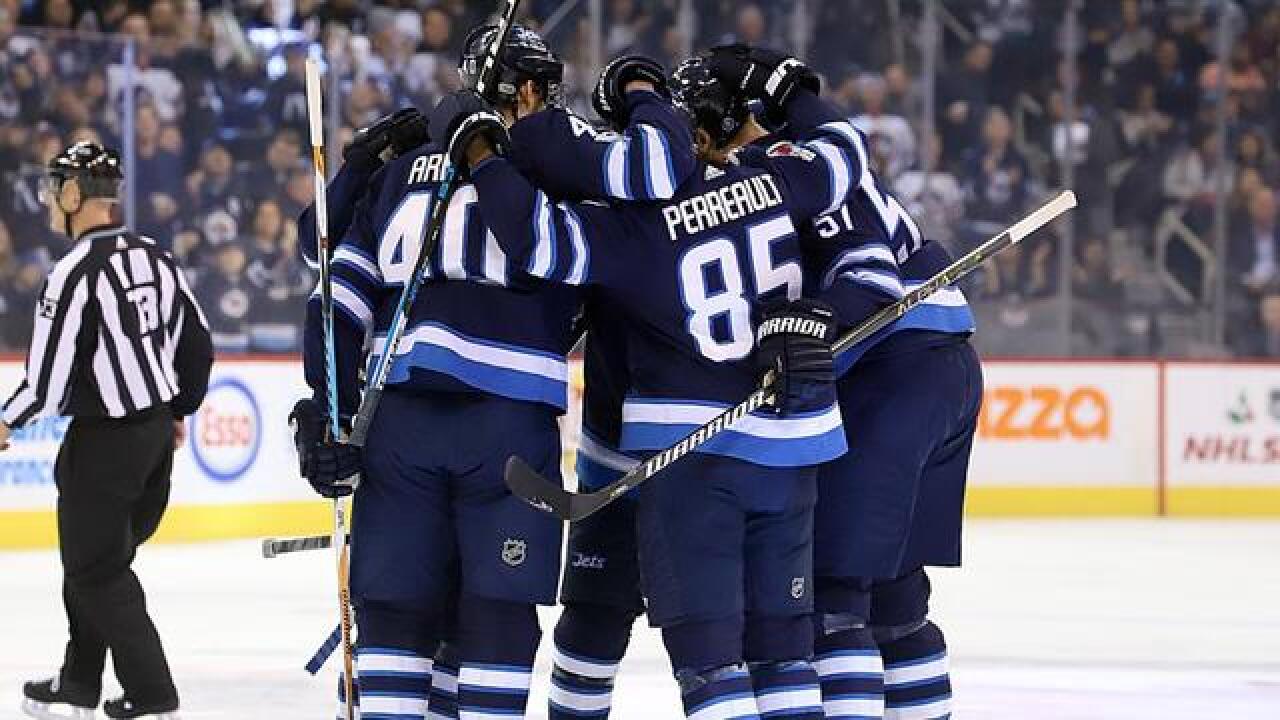 Copyright 2018 Scripps Media, Inc. All rights reserved. This material may not be published, broadcast, rewritten, or redistributed.
&lt;p&gt;The Jets rallied back from a 3-0 first deficit to beat the Predators 7-4 in game three of their second round series Tuesday night. Winnipeg now leads the series 2-1.&lt;/p&gt;

There is a fine margin in a best-of-seven series between two great teams. It can be one game, sometimes even one moment that can change the outcome of the series. The Predators better hope that game was not Tuesday when they coughed up a three goal lead and fell 7-4 to the Jets inside a delirious Bell MTS Place.

Winnipeg now leads the series 2-1 and will come back looking for blood Thursday night in game four at 8:30 p.m.

The moment could've come at the end of the first period when Mike Fisher, who has been great in this series and already had pounded in the first goal of the night, narrowly missed giving the Predators a 4-0 lead when he shoveled a backhand past Connor Hellebuyck but off the post. Filip Forsberg then clanged a shot off the iron just 40 seconds into the second period that would have extended the lead as well.

After dodging those bullets Winnipeg took control. Paul Stastny redirected a Jacob Trouba shot from the point, past what up to that point had been a brilliant Pekka Rinne, to get the Jets on the board. That was the moment that the 15,000 Jets fans crammed into the smallest arena in the NHL got back on their feet and regained their voice.

If they were still wary after the Predators first period domination, their fears were calmed a couple minutes later. After a mysterious charging penalty on Austin Watson was greeted with retaliatory punches from Mark Scheifele, both men were sent to the box. The Jets continued their domination of four-on-four play in this series when Dustin Byfuglien's bomb found the back of the net to make it 3-2.

Then came the moment that the collapse was complete. Just 18 seconds later with the building roaring and Winnipeg again buzzing in the offensive zone, the Nashville defensemen lost contract with Trouba, who pounded the tying goal into an open net before Rinne could even react.

Three goals in 2:51 erasing a 3-0 road lead in a series between the two best teams in the NHL this season. That'll sting.

So would the missed call inside the final minute of the second period when Kyle Connor hooked Ryan Ellis to the ground as he got possession of the puck in the defensive zone. With no whistle, the Jets regained possession and quickly cycled it against an out of position Predators defense from Stastny to Patrick Laine to a wide open Byfuglien for a one-timer that gave him his second goal of the game and gave the Jets a 4-3 lead after two periods.

The onslaught could've been on right then, but the Predators fought back in the third period with a beautiful power play wrister from Filip Forsberg that tied the game with 12:20 to go. But that's when this team's achilles heel reared its ugly head once again.

The most penalized team in the league this year took three penalties in less than four minutes with the game tied in the third period. Kevin Fiala, the overtime hero of game two, committed an obvious trip along the boards in the neutral zone.

Then just as Fiala returned to the ice following the penalty kill, a tired P.K. Subban committed a high sticking violation that sent him to the box for 2:00. That's when the Jets capitalized. Rinne stopped a point blank Scheifele shot from the slot, but the rebound bounced right onto the stick of Blake Wheeler and he pounded it home for the go-ahead goal.

Frustrations then mounted with Rinne taking a 2:00 minor for slashing Adam Lowry, which cut into the Preds' opportunity to mount a comeback. When Winnipeg's power play time finally ended and Rinne went to the bench for the extra attacker, the Jets tacked on two empty-net goals to make it a 7-4 final.

It's tough to win in the playoffs, especially on the road, which is why it is all the more inexcusable what happened to the Predators on Tuesday night. The start was near perfect, but the final 40 minutes were a disaster that cost them the chance to regain home ice advantage.

So now we're three games into a series in which the Predators outplayed the Jets for much of game one but lost 4-1, escaped in overtime in game two and now surrendered a 3-0 lead on the road in game three. It's not going to be a fun film session on Wednesday.

And it's not going to be a fun offseason if the Preds don't now rebound to win three of the final four games in this series. If they don't, they will look back at all the moments from Tuesday night; the missed chances, missed assignments, missed calls and all the penalties that cost them.

They'll remember how game three started, and how it so abruptly got away.