Tennessee caps off season turnaround with win over Vanderbilt 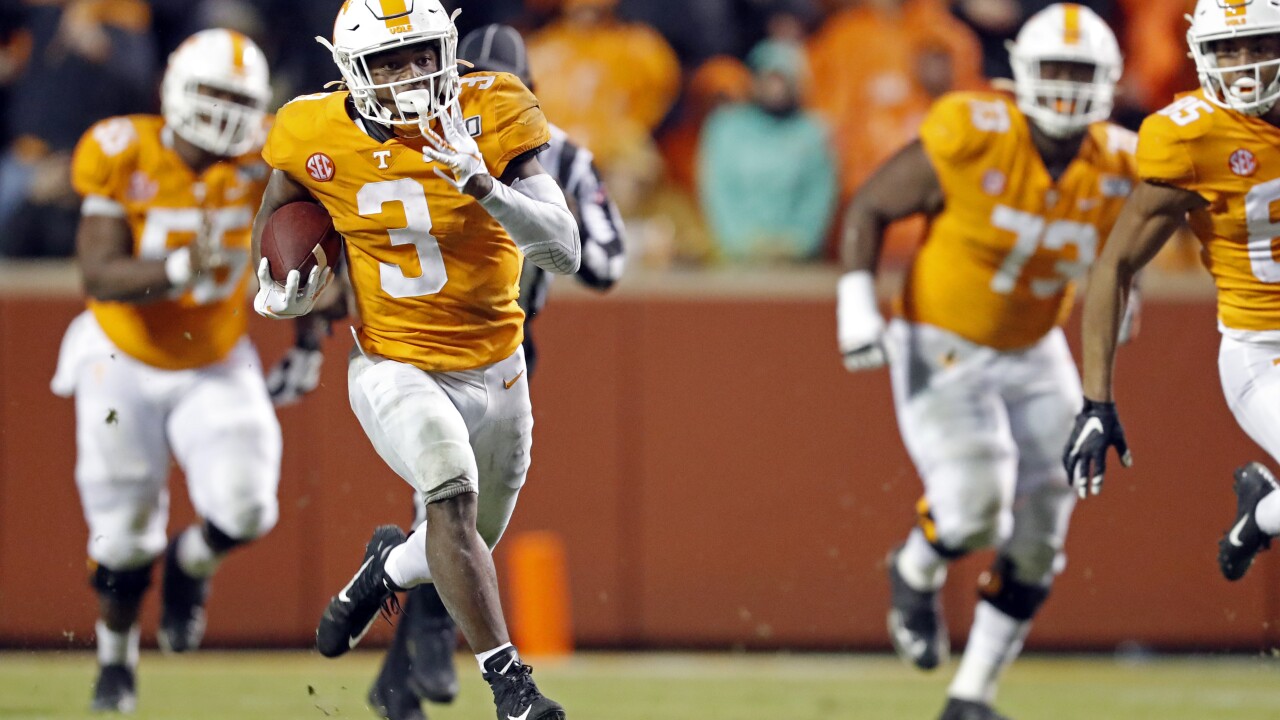 KNOXVILLE, Tenn. (WTVF) — On a soggy senior day at Neyland Stadium Tennessee sent its seniors out in style, dominating Vanderbilt 28-10 for its first win in the series in four years.

A hearty group of the 87,367 announced in attendance showed up early, despite stormy conditions that delayed the start of the game by 28 minutes, to cheer on the 13 seniors as they ran through the T for the final time.

About a third of the crowd remained, after a second delay lasted 39 minutes midway through the fourth quarter, to see the final seconds tick off the clock in Tennessee’s fifth straight win to close the season. A remarkable turnaround for a team that started the season 1-4 with losses to Georgia State and BYU.

That’s why the pregame ovations were warranted for a group of guys that stuck with it through the ups and downs of their career to bring the program back to relevance. Guys like Jauan Jennings, Marquez Callaway, Daniel Bituli, Darrell Taylor and others who never quit on this program even when others gave up on them.

They will end their careers in a bowl game and with the knowledge that they have laid the groundwork for the program to have even more success in the future under head coach Jeremy Pruitt.

Freshman Eric Gray had the game of his young career, rushing for 246 yards and the first three touchdowns of his career. His 56-yard touchdown run late in the first quarter erased an early 3-0 Vanderbilt lead following a Jarrett Guarantano interception. His 94-yard TD run in the second quarter was the second-longest rush in school history.

And Pruitt’s defense, now two full seasons into his system, continued its late season surge. The Vols held the Commodores to just total yard and didn’t surrender a touchdown to a team that had averaged nearly 42 points against them over the last three seasons.

For Vanderbilt it was a fitting finish to a season that never lived up to its preseason promise. Star tight end Jared Pinkney, who had two touchdowns last week, was a late scratch due to a wrist injury suffered in practice. Graduate transfer quarterback Riley Neal struggler again, throwing for just 139 yards while getting sacked three times. And Ke’Shawn Vaughn could never get going against a Tennessee defense determined to stop him and the ground game.

Vanderbilt finishes the season 1-7 in SEC play and with major questions about what’s ahead under Derek Mason without senior stars like Vaughn, Pinkney and receiver Kalija Lipscomb, and still no clear direction at quarterback.

Tennessee will miss the seniors it celebrated Saturday, for the leadership they brought to the program through some of its darkest days. But the Vols are equipped to build on this season under Pruitt with only seven graduates holding prominent spots on the team’s depth chart.

The Vols are back on top of this rivalry, as they have been 76 times now in the 114 years of this in-state battle. And for the first time in four years the arrow is pointing up for the team in orange and trending down for their neighbors to the west.

And that was cause for another celebration at game’s end, with the fans that stuck it out through both delays belting Rocky Top loud and proud.