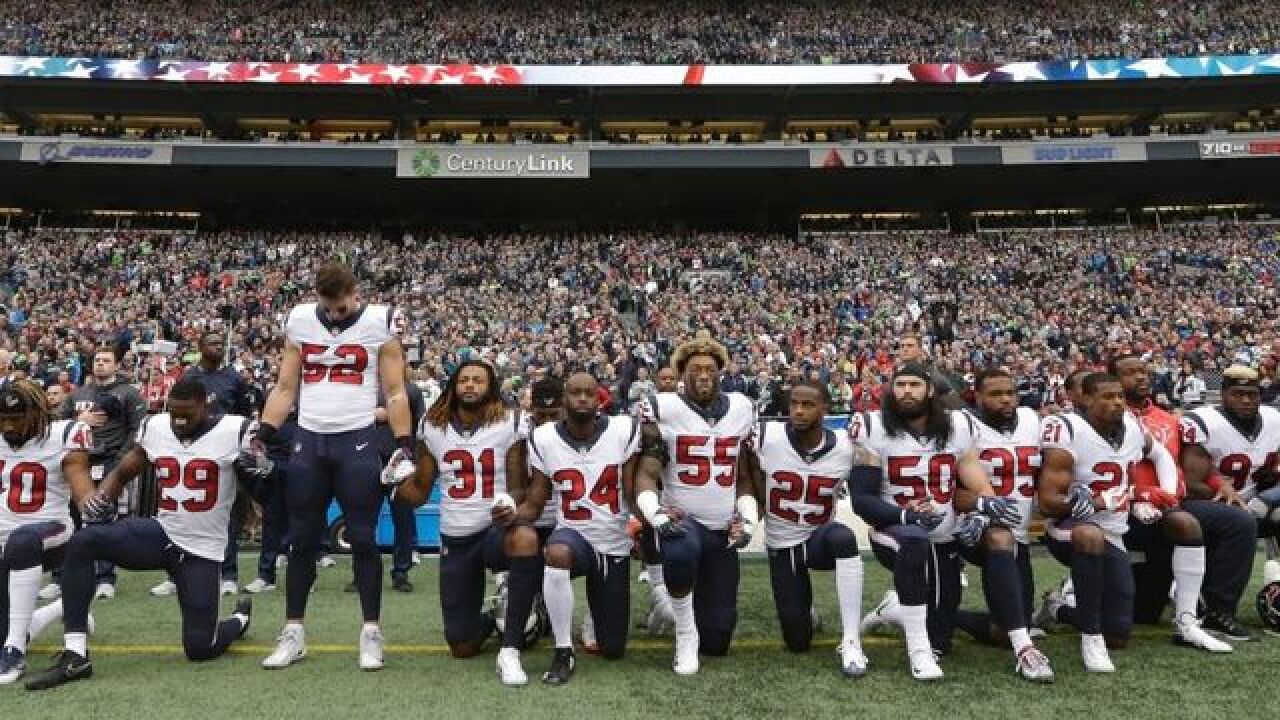 Copyright 2017 Scripps Media, Inc. All rights reserved. This material may not be published, broadcast, rewritten, or redistributed.
&lt;p&gt;Texans players kneel during national anthem Sunday in Seattle in protest of team owner Bob McNair's comments over recent NFL protests and the backlash and the league's business.&lt;/p&gt;

The ongoing protests in the NFL jumped the shark Sunday when the majority of the Houston Texans football team took a knee during the national anthem to prove that they are the most offended collection of millionaire athletes possible, hijacking the message of the original anthem protests and highlighting a growing problem in American society today.

The players protested because the owner of the team, Bob McNair, said during a private meeting with NFL executives last week that the players' protests were bad for the league's business because you can't have the "inmates run the prison." It took three days for his comments to become public, but as soon as they did the backlash, particularly on social media, was swift.

The groupthink mob called McNair a racist, seemingly unaware that several members of his team, and the protestors, are white. Others said that it was a clear indication that McNair (and other owners) views players as prisoners and property that he controls.

No one seemingly took a breath to consider the context or the facts.

What McNair said was an alteration of the common idiom that you can't let the "inmates run the asylum", a phrase that's been around centuries and uttered by disgruntled parents throughout this nation every time their kids try to take control of the family's plans. Chances are many of you have uttered the phrase at least once in your life.

It's also an idiom that makes complete sense when you consider what was being discussed in the meeting, and the fact that unquestionably the players' protests have been bad for the NFL's business. Remember, an idiom is defined as "a group of words established by usage as having a meaning not deducible from those of the individual words", so it is not directly correlating players to inmates or teams to prisons. Unless you believe that the when people say it's "raining cats and dogs", cats and dogs are actually falling from the sky.

As someone who writes and speaks for a living, I will tell you that everyone will misspeak from time to time and we need to be really careful as a society to not rush to condemn people for words, when the context and their actions don't support the outrage as this case clearly did not. Unless of course you are Draymond Green, the Warriors star agitator who hasn't gone five minutes in his NBA career without saying something offensive to an opposing player, who opined Friday that, "figures of speeches are not okay in 2017."

McNair, who is 80 years old by the way, most likely simply misspoke while trying to illustrate that it's a bad idea when the employees of any business try to make decisions for the company. As ineloquent as the words spoken may be perceived by some, his point was correct.

One of the people in the meeting with McNair was Troy Vincent, a former NFL player and current league executive who happens to be black. Vincent raised his concerns over the comment at the end of the meeting and McNair reportedly was immediately concerned at how his comment was taken and apologized. He apologized again in a team meeting with Texans players once the comments were made public on Friday.

But the apology wasn't good enough apparently, as some players skipped work Friday by leaving the facility in disgust. Star wide receiver DeAndre Hopkins reportedly took a mental health day. Never mind the fact that McNair showed remorse for an innocent mistake many reasonable people wouldn't think even merits an apology, or the fact that McNair has a long history of supporting his players and working for positive change in the Houston community.

The context or the track record don't matter in a world where everyone seeks the moral high ground of retweets and likes on social media instead of the facts. ESPN analyst Charles Woodson went so far Sunday morning as to say he wouldn't utter the "O" word anymore.

What "O" word was he talking about?

Seriously. We are all dumber for having watched that segment.

And at the end of the day this faux outrage and the Texans' decision to take a knee during the anthem hurt the message of the original NFL protestors. Their display truly had nothing to do with the anthem and further blurs the goal of Colin Kaepernick and others that have taken a knee in an effort to raise awareness for social inequality.

It's fair to agree or disagree with Kaepernick's views or how he chose to protest, but social inequality, police brutality and systematic oppression are at least topics worthy of discussion. What the Texans did Sunday is minimize those important issues by protesting their owner flubbing an age old idiom for which he later apologized!

And in the process they proved McNair's point. The inmates are running the asylum in the NFL, and that is bad for business.