Titans compete with, learn from Pats even in 22-17 loss 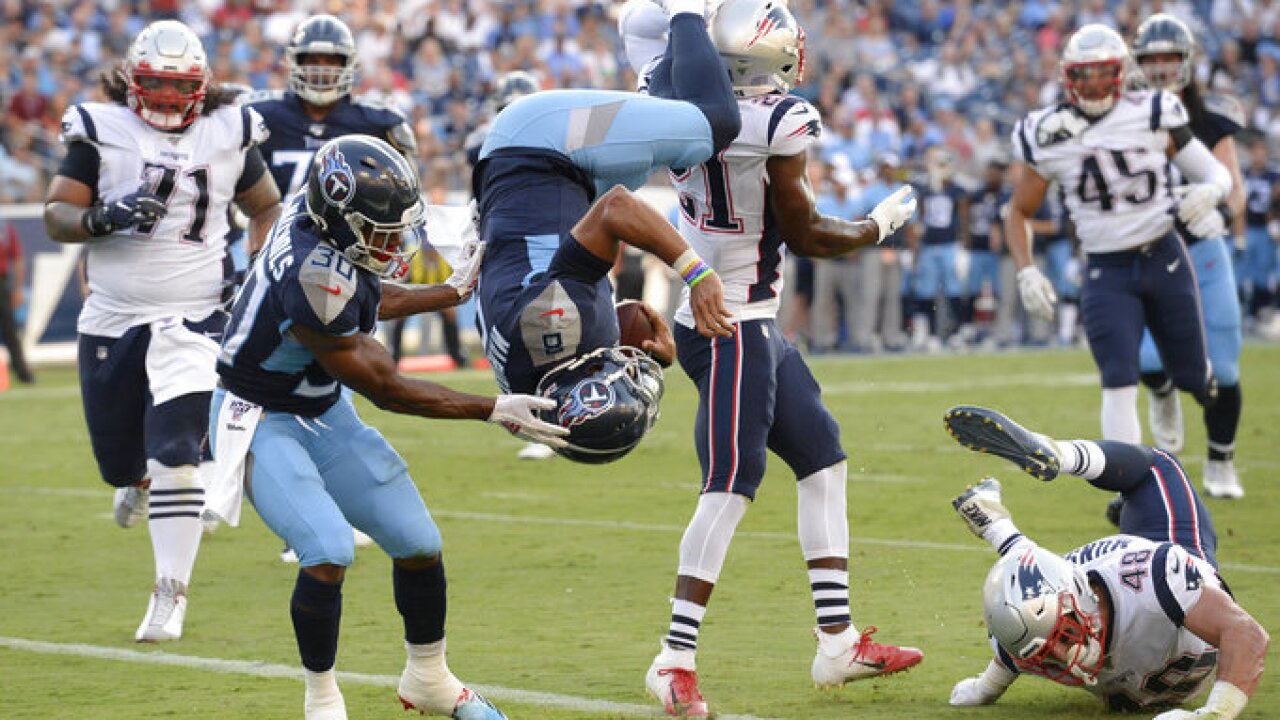 Mark Zaleski/AP
Tennessee Titans quarterback Marcus Mariota (8) flips into the end zone as he converts a 2-point conversion against the New England Patriots in the first half of a preseason NFL football game Saturday, Aug. 17, 2019, in Nashville, Tenn. (AP Photo/Mark Zaleski)

NASHVILLE, Tenn. (WTVF) — For two days this week the Titans got an up close look at just how hard the Super Bowl champion Patriots practice. On Saturday night they learned that week two of the preseason is a long ways from February 2nd and Super Bowl LIV in south Florida.

Tom Brady and most of the Patriots starters got the night off, showing exactly how much stock Bill Belichick put into an exhibition game in 93 degree heat in Nashville.

Marcus Mariota and Ryan Tannehill both threw first half touchdown passes as the Titans built a 17-8 lead before giving way to backups, who ultimately coughed up the lead in the second half in a 22-17 defeat.

The result ultimately means nothing to either side, but shows this Titans team still has a lot to do yet this preseason before any kind of run at the playoffs, let alone the Super Bowl can begin.

There were several positives. Marcus Mariota shook off back to back three and outs to lead the Titans on an 87-yard touchdown drive to end his night. He hit Delanie Walker and Corey Davis for big gains down the middle, then hit Walker, who looks more and more like his old self each time he steps on the field, in stride for an 11-yard touchdown to cap a 6-9, 68-yard performance.

Tannehill came in and looked sharp for a second straight week. He connected on seven of his 11 passes for 84 yards and led the Titans on a seven-play, 75-yard scoring drive in his first possession.

Tannehill found Jeremy McNichols in the flat, and he turned up field and leaped over a defender and into the end zone for a 15-yard score. It was a nice moment for McNichols, who has shown the ability to make big plays in the open field in camp and had a 33-yard touchdown run called back in the first quarter. The former Boise State standout is going to make it tough for Jon Robinson and Mike Vrabel to leave him off their 53-man roster.

Defensively, Logan Ryan jumped a crossing route on the second play of the game to intercept a Brian Hoyer pass. And safety Kenny Vaccaro looked to end the Pats’ second drive with a blitz sack that was nullified by a penalty.

Still, the Titans defense forced three punts, an interception and got a safety, when Sharif Finch beat his man and was held in the end zone, in the first half while allowing just one scoring drive. The defensive line, which Mike Vrabel praises unsolicitedly this week for its improvement, impressed again with DaQuan Jones running down an end around and Matt Dickerson blowing up a third and one play.

But there are questions that will have to be addressed. The inconsistency on offense continues. Penalties that stalled or extended drives need to be cleaned up from a team that was the least penalized team in the league last year. Roster spots will also be won and lost over the next two weeks.

There’s a long ways to go, but the Titans know they can compete with the Patriots and now they’ve seen the attention to detail in practice that is required to be elite.

The Titans’ motto for the season is go from “good to great”. They saw greatness up close this week. Now it’s up to them to go chase it down.