Titans find their blueprint for success in Atlanta 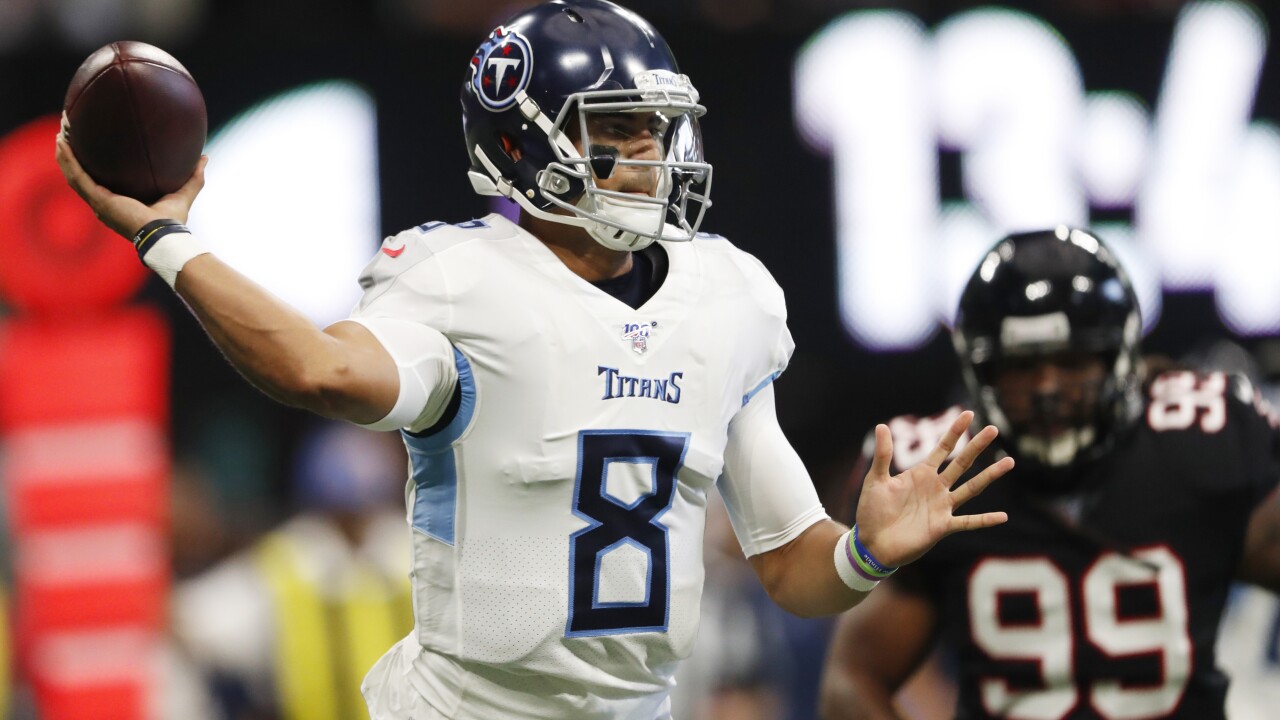 ATLANTA, Ga. (WTVF) — In their first trip inside the beautiful $1.6 billion Mercedes Benz Stadium, the Titans finally showed off the bells and whistles of their offense. Throwing first to build a lead against the Falcons, then riding another big game from Derrick Henry and a stingy defense to a much needed 24-10 win.

Marcus Mariota called Sunday’s offensive performance the blueprint. Offensive coordinator Arthur Smith should laminate it and post it to the wall in his office.

“If we’re able to do that week in and week out, we’ll be pretty good.” Mariota said after the game. “I believe no matter the defense or the situation we have guys that can make plays.”

Through the first three weeks of the season the Titans were one of the most predictable teams in the NFL, running on first down on nearly every possession. Defenses loaded the box to stop Henry and the result was a lot of second and third down and long situations that proved difficult to overcome.

On Sunday the Titans threw on the game’s very first play, a 14-yard gain to Corey Davis. The first play of the second drive was a playaction pass to A.J. Brown that went for a 55-yard touchdown. In all, the Titans kept the Falcons off balance defensively by throwing on the first play of five of their first eight possessions while racking up 24 points in the first half.

That equaled their total offensive production from their consecutive losses to the Colts and Jaguars, and built a multiple score lead that allowed them to grind the game away after halftime with Derrick Henry, who rushed for exactly 100 yards on 27 carries, and a stingy defense.

“We were very explosive in the passing game. A.J. was making plays, Corey making plays. Marcus was making good reads, throwing the ball well,” Henry said. “I was happy for us to be able to do that early and then later on the game we were able to run the ball.”

In essence, the Titans set up the run by establishing their pass. The exact opposite of what they are known for. And guess what? That creative playcalling works.

NFL defenses are too good when they know what’s coming. You have to be able to keep them on their toes by mixing things up. And the Titans showed Sunday that they have multiple playmakers besides Henry.

Atlanta wide receivers Julio Jones and Muhammad Sanu had the name recognition entering the day, but it was Davis and Brown that stole the show. The duo combined for eight catches, 185 yards and three touchdowns.

“I told these wide outs, ‘everybody knows about who they have over there, why not us?’” Davis said. “Why not wake them up to who we are and that’s what we did.”

Brown was a bit more bashful, saying simply that he just wants to work hard and try to make plays. But, like Henry, Davis and Brown are big, physical and fast for their position. They showed the ability to get open, make catches and make plays with the ball in their hands Sunday. The Titans need to get each of them the ball more.

That seems just fine with the quarterback. Mariota enjoyed a bounce back game himself by consistently targeting his two young wide outs.

“I’ve seen it. I just want them to continue to be who they are,” Mariota said. “They can be special. If we can continue to help them and get them involved, hopefully this will be something we can see week in and week out.”

Mariota finished the day 18-27 for 227 yards and three touchdowns, silencing his critics for at least one week. His coach crediting him for being accurate, poised and making smart decisions as he’s now thrown seven touchdowns against no interceptions this season.

With the lead, the Titans defense clamped down. They recorded five sacks of Matt Ryan. Jurrell Casey stripped the ball loose and recovered a fumble on one of them. They also got the benefit of a missed field goal from Matt Bryant at the end of the first half, and stopped the Falcons three times on fourth down.

The win snaps the Titans’ two game skid and gets them back to 2-2 through a difficult September that included three road games without suspended Pro Bowl left tackle Taylor Lewan. A lot of people would’ve taken that a month ago, even if it happened in a way no one could’ve possibly predicted.

But now the task for Vrabel and this team is to figure out how they build this one great performance into multiple good games in a row. As Vaccaro said after the game in the locker room, you can’t really get too excited because this team’s been in this position before.

“I feel like we did this last year,” Vaccaro said. “We’d beat the Patriots or the Eagles and we come back and lose.”

The critics, silenced briefly with Sunday’s win, will be waiting for another letdown. The 3-1 Bills await next week, and a year ago Buffalo handed the Titans perhaps their worst loss of the season.

It’s up to the Titans to prove that this team will be different, and go re-establish their homefield dominance at Nissan Stadium after consecutive losses. Beat the Bills next week and then maybe we can discuss the Titans turning the corner. Lose and it will be the same old story.

“(This win is a) good way to finish the first quarter of the year, but we’ve got three more quarters,” Mariota said. “We’ve talked about it all offseason, just being able to build that consistency. To take that next step as an organization, we have to take that next step.”

Vrabel set the tone for the coming week by opening his postgame press conference by tying the Titans’ gameday success to their entire week of work, and emphasizing that it must be repeated moving forward.

“We’re going to have to understand what got us here, what helped us prepare and execute most importantly,” Vrabel said.

Take this gameplan and bottle it, Mike.

On Sunday it was a winning formula. And it’s one that can work again.