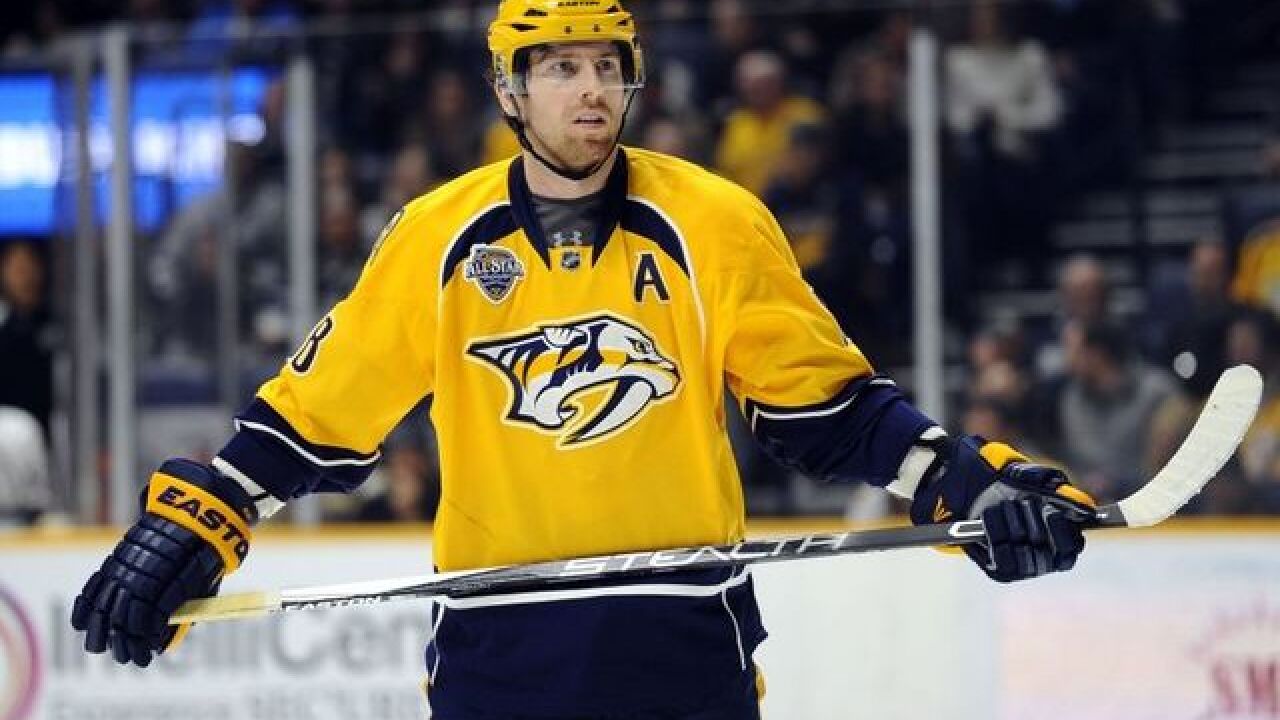 Our countdown of the top sports moments of 2017 in middle Tennessee continues today with the best games of the year.

Again, this is a fun, easy to debate (or disagree with) list, but it’s my best attempt based on notes and coverage at the time it happened to encapsulate what captivated my attention, and most of yours, this year.

After the deepest postseason run in franchise history, it should come as no surprise that multiple Predators games dominate this year’s top 10 list.

Maybe the most painful loss of the Titans season came when Robbie Gould hit a 45-yard field goal as time expired to lift San Francisco to a win. Jimmy Garoppolo threw for 381 yards, but the Titans rallied from 16-3 down on a pair of Marcus Mariota touchdown passes and seemingly had the game in control after a Ryan Succop 50-yard field goal with 1:07 to go. But Garoppolo drove San Francisco into position for Gould’s attempt which gave the Niners a third straight win and dropped Tennessee to a second straight costly late season loss.

Sitting at 6-4 and needing to win its final two games of the season to have any shot at its first ever bid to the FCS Playoffs, Austin Peay trailed Eastern Kentucky 24-7 in the third quarter, but Jeremiah Oatsvall threw for two touchdowns and ran for another with 53 seconds left as the Governors scored the game’s final 24 points to win. The Govs' win over Eastern Illinois the next week tied a school record for wins in a season with eight.

Despite a loss, game four of the Western Conference Final may have been the most exciting game of the Preds’ playoff run. Filip Forsberg capped a Nashville rally by scoring with just 36 seconds left in regulation, nearly blowing the lid off Bridgestone Arena where fans dressed in gold had seen the home team win 10 consecutive playoff games. But it was a much different scene 10:25 into overtime when Corey Perry’s shot deflected off P.K. Subban’s stick and in the net to end the home winning streak and even the series at 2-2.

The series got off to an equally dramatic beginning in Anaheim as the Ducks rallied to tie the game in the third period only to watch the Predators win it in OT. Mattias Ekholm tracked down a puck in the corner and passed it to Subban, who fed James Neal for a one-timer from near the right circle. Neal’s shot hit an Anaheim defender and went in for his fourth goal of the postseason, delivering the win to the Preds.

Don’t call this an upset. After knocking off tournament favorite Michigan State in 2016 and winning a school record 31 games in the regular season, 12-seed Middle Tennessee was actually favored over fifth-seed Minnesota in its NCAA Tournament first round game in Milwaukee. And Reggie Upshaw made sure they did just that, pouring in 19 points on 7 of 13 shooting to help the Blue Raiders reach the second round for the second straight year.

Marcus Mariota threw for 225 yards and two touchdowns as the Titans scored 21 straight points in the third quarter to build a lead. Russell Wilson was even better, tossing for 373 yards and four scores for the Seahawks, but DeMarco Murray’s 75-yard touchdown run and a late defensive stand helped put the game away for Tennessee.

With the Predators looking to advance further than they ever had in the Stanley Cup Playoffs, the nervous energy inside Bridgestone Arena was at an all-time high, and fans didn’t truly settle in until Roman Josi’s goal 35 seconds into the second period tied the game at one. Ryan Johansen deposited a feed from Viktor Arvidsson past Jake Allen 3:15 into the third period for a 2-1 lead and Pekka Rinne helped secure the lead with several terrific saves until Calle Jarnkrok’s empty-net goal in the final seconds kicked off a series-clinching celebration.

Already leading top seeded Chicago 2-0 in their best-of-seven first round series, Nashville found itself trailing 2-0 entering the third period of game three on home ice. Forsberg, the team’s leading scorer, scored just over four minutes into the period to get the Predators on the board and then tied the game with just under six minutes left to play to force overtime. Young Kevin Fiala scored the game-winner with a pretty, patient goal in front of the net as the Preds took a commanding 3-0 series lead.

With 50,000 fans in the streets around Bridgestone Arena, the spectacle around all three of the Stanley Cup Final games in Nashville may never be duplicated, but game four is the moment the Cup truly felt within the grasp of the Predators. Minor Leaguer turned star Frederick Gaudreau scored his third goal of the series early in the second period for a 2-1 lead, and Mike Fisher’s falling stick pass hit Arvidsson in stride for a breakaway goal in the third to make it 3-1. By the time Forsberg put in an empty-netter in the waning seconds the Preds had a 4-1 win and evened the series 2-2.

Never before had the Predators won a title of  any sorts, but that changed on this late May night. Colton Sissons tallied his first career hat trick as the shorthanded Preds used the energy of an electric Smashville to advance to their first Stanley Cup Final. Nashville led it 2-1 entering the third period when Sissons’ second goal extended the lead, but the Ducks rallied with goals from Chris Wagner and Cam Fowler to tie the game midway through the third. Sissons’ third and final tally came on a shot from the left circle with six minutes left, and a pair of empty-net goals from Forsberg and Austin Watson in a feisty final few minutes helped clinch the Predators first ever Western Conference Championship.