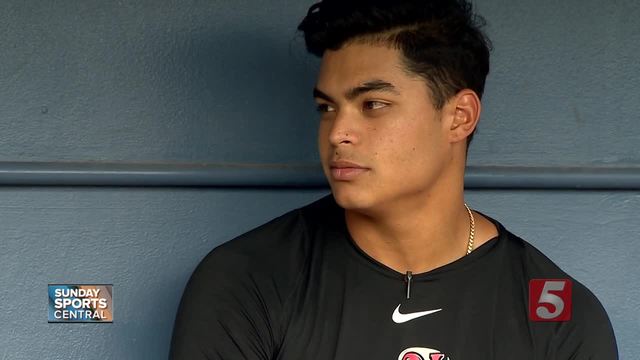 Jesus Luzardo looked the part of a future big league star in his first start in Nashville. 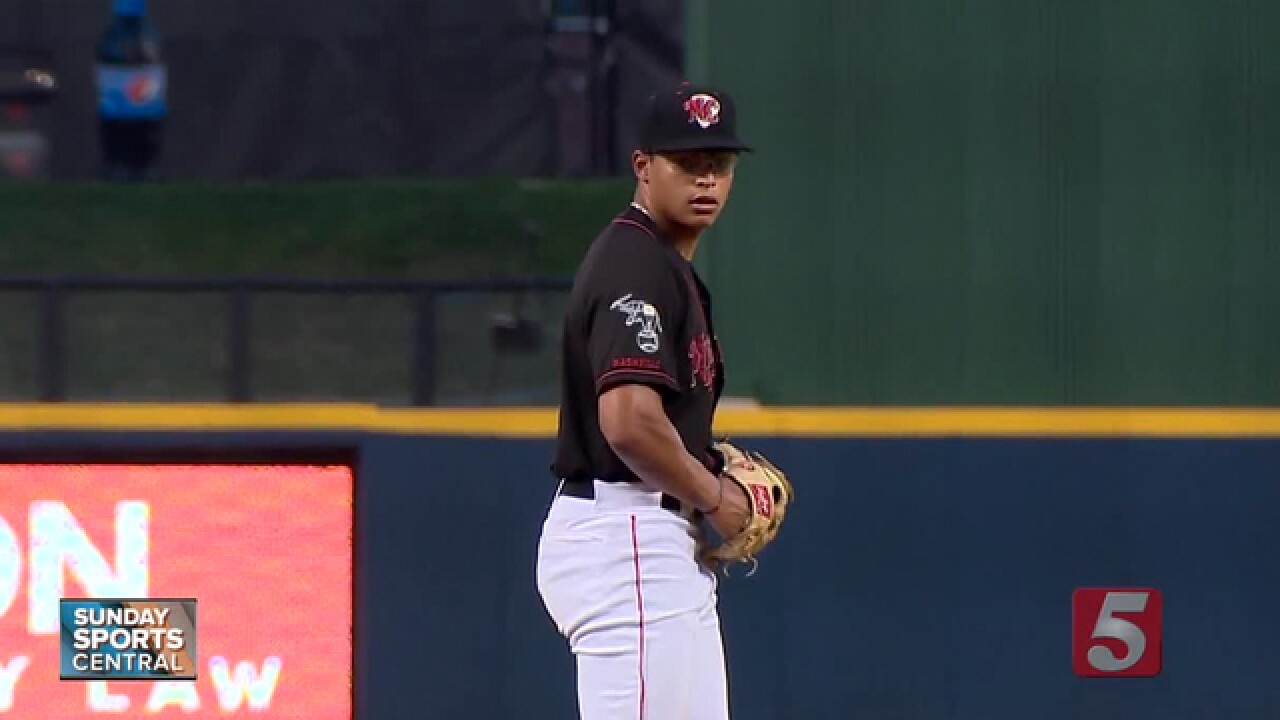 Jesus Luzardo looked the part of a future big league star in his first start in Nashville.

The A’s number number one prospect dazzled against Sacramento, striking out six batters in five scoreless innings in his AAA debut.

“I can’t complain about five innings scoreless,” Luzardo said sitting in the dugout the day after that start. “It’s a good debut. I’m trying to just build confidence here and show what I got.”

The 20-year-old Luzardo is considered by many to be one of the 10 best prospects in all of baseball. The rare left-handed starter with a plus-fastball that ranges in the mid-to-upper 90s.

But his repertoire doesn’t stop there. He also has a strong change-up, that’s especially devastating on right-handed hitters, to go along with a breaking ball that’s already fooled more experienced hitters.

“I’ve started to kind of figure it out,” Luzardo said. “People say, ‘pitchability’, and I know I don’t have to only use my fastball. I can use all my pitches and I’m comfortable with all three.”

In 21 starts this year across three levels of Minor League Baseball, Luzardo has been brilliant, posting a 10-4 record.

“I’ve talked to guys who have been at all three levels who have been there a certain period of time, and just picked their brains,” Luzardo said. “(I’ve learned) definitely the way to attack a hitter, how to read a hitter, read swings and know the game. So a lot of different things I’ve picked up on this year.”

Luzardo’s dazzling performances moved him from Class A Stockton to AA Midland after just three starts this season. Then in early August he was called up to Nashville to join the Sounds.

It’s been a whirlwind year that hasn’t slown down enough for him to think about it.

“Not yet. I’m sure when I get home it will kind of hit me that I’ve been all over the place,” Luzardo said while mentioning he’s sleeping in a teammates’ apartment near First Tennessee Park during his stay in Nashville. “So far I’m just trying to take it all in and enjoy the moment.”

Luzardo was born in Peru, the son of two Venezuelan parents. But his family moved to Parkland, Florida when he was two years old, and South Florida has been home ever since.

This winter that home was forever changed by unspeakable tragedy.

“I was on my way to the high school,” Luzardo said, the smile leaving his face. “I was supposed to throw live to some batters there before I left, and I was running late because I was supposed to be there right when school let out. My old coach actually texted me and said, ‘don’t come. There’s an active shooter.’”

Luzardo was a standout at Majorie Stoneman Douglas High School and keeps close tabs on his alma mater. He watched stunned as terror unfolded at the school on Valentine’s Day.

“It took me awhile to get home. It was like chaos — they closed down some streets,” Luzardo said. “From there it was just talking to (some guys on the team I knew) and watching the news.”

Fourteen students and three faculty members died that day in the school. Among the deceased, were two of Luzardo’s acquaintances and the school’s athletic director.

“It was tough,” Luzardo said. “I can’t say I was best friends with them, but being from the same city and going to the same school — the Athletic Director I used to talk to him all the time. It was definitely tough, and just seeing people you know, how they got affected, it definitely sucked at the time.”

The devastation brought the community of Parkland together, and has spurred Luzardo on as continues to climb baseball’s professional ranks.

At the Futures Game at Major League Baseball’s All-Star game he wrote the number “17” on his spikes in honor of the victims. He continues to find both inspiration and motivation from the tragedy that day.

“When I left for spring training I kind of made it a point in my mind that I definitely want to represent Parkland, Florida,” Luzardo said. “You know, take strength out of what they went through.”

Now removed from the grief, Luzardo is staring down a bright future. He’s likely to make his Major League debut for the A’s some time early in the 2019 season.

But he’s in no hurry to leave Nashville. The way he sees it, there’s still a lot for him to learn. And he’s blessed to have the health and opportunity to do it while playing the game he loves.

“(I want) to finish the season strong,” Luzardo said when pondering his future. “Keep doing what I’ve been doing, pitching the way I have, and just trying to stay on my plan, having the focus I’ve been going on, and finish healthy.”