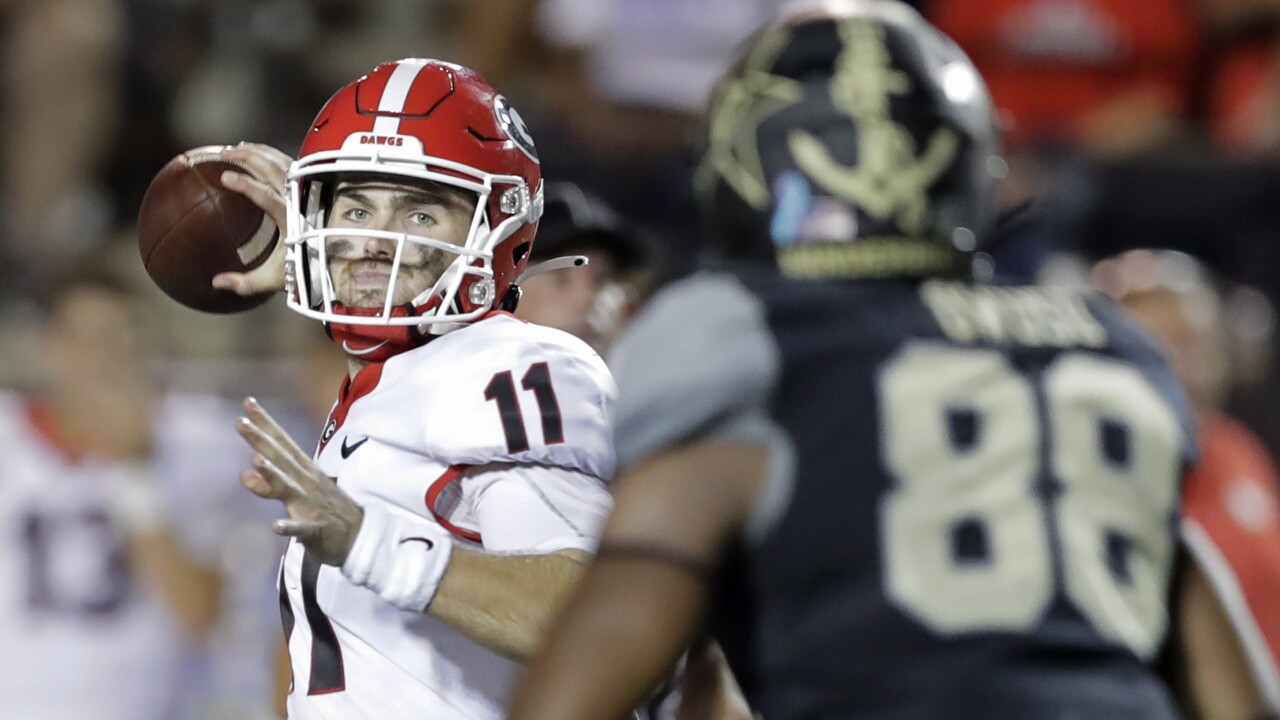 NASHVILLE, Tenn. (WTVF) — Vanderbilt finally provides an answer as to who its quarterback is, but had no answer for no. 3 Georgia in a season opening 30-6 loss Saturday night.

In the worst kept secret of the fall, Riley Neal led Vanderbilt’s offense out of the huddle against the Bulldogs. The Ball State grad transfer had long been believed to be the guy on West End, beating out junior Deuce Wallace for the job during fall camp.

Vanderbilt coach Derek Mason tried to keep his QB decision a secret until kickoff in an effort to grab any advantage he could against the heavily-favored Bulldogs, but it didn’t help much.

Georgia quarterback Jake Fromm led the Bulldogs 75 yards in eight plays to start the game, hitting Demetris Robinson for a three-yard touchdown that put Neal in a hole before he even took the field.

Neal and the Commodores managed just 34 yards on 14 plays over those first two drives while the Bulldogs marched for 89- and 80-yard touchdown drives to extend their lead to 21-0 midway through the second quarter, much to the delight of a mostly red-clad Georgia crowd that probably had 75 percent of the sellout crowd of 40,305 at Vanderbilt Stadium.

That was more than enough for Kirby Smart to take his foot off the gas pedal and not have to go for any more than he had to on night one. UGA is the favorite to win a third straight SEC East division title and a contender to get back to the college football playoff.

The Bulldogs are big, fast and tough. They ran for more than 300 yards against Mason’s defense. D’Andre Swift gaining 147 yards on 16 carries with Brian Herrien chipping in 65 more yards on 12 runs.

Fromm is a leader, asked to complete 15 passes in 23 attempts Saturday, but capable of doing so much more when the chips are down. And the UGA defense held Vandy to fewer than 200 total yards.

This was about Georgia just being the better team, especially on a night Vanderbilt broke in a new quarterback.

Neal faced consistent pressure, only throwing for 85 yards on 14-25 passing but mostly avoided the big mistake. Candy’s only real miscue of the night came on a botched exchange between Neal and Ke’shawn Vaughn that led to a fumble late in the fourth quarter.

Vaughn showed flashes of why many believe he’ll be one of the top running backs taken in next year’s NFL Draft, but never found a hole against the UGA defense, finishing with 74 yards on 15 carries.

Jared Pinkney and Kalijia Lipscomb remain big play receiving options for the Dores as well, and the defense buckled down after its shaky start.

Vanderbilt will start an eight consecutive SEC season at 0-1, but there’s hope for much brighter days ahead of Neal and company can gel, starting with next week’s non-conference trip to Purdue.

And that’s where the season will really start for these Commodores. Beating Georgia was unlikely, but the trip to West Lafayette will begin a stretch in which Vandy plays non-conference games against Purdue, Northern Illinois and UNLV, and match up with LSU, Ole Miss, Missouri and South Carolina in the league. Other than LSU, the other four power five conference teams all lost this weekend.

The goal for Vandy remains the same. Make it to a bowl game for the second straight season and third time in four years to keep the program moving in the right direction.

Smart already has Georgia’s program where he wants it, in a position to compete for SEC and national championships. And about 30,000 fans came to Nashville Saturday to enjoy the fruits of it.