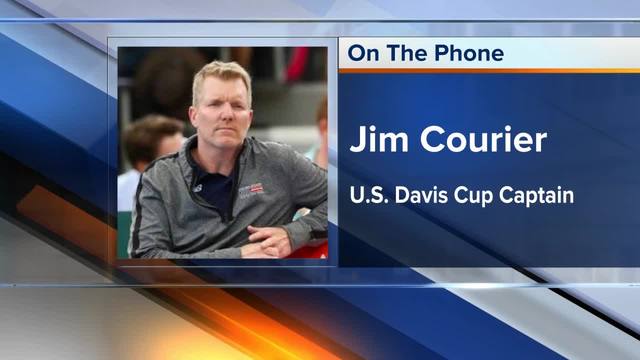 The Davis Cup returns to Nashville for the first time in 40 years next month. On Wednesday the United States Tennis Association unveiled the team locals will be cheering on against Belgium in that quarterfinal tie at the Curb Events Center.

The Davis Cup returns to Nashville for the first time in 40 years next month. On Wednesday the United States Tennis Association unveiled the team locals will be cheering on against Belgium in that quarterfinal tie at the Curb Events Center.

It's a similar team to the one the United States used in its first round victory over Serbia with one notable addition. Jack Sock, the highest ranked American singles player at no. 11 in the world, returns to the lineup for veteran captain Jim Courier.

Sock won three tournaments in 2017, including the Paris Masters, to move into the top 10 of the world rankings. He's also a strong doubles player, having just won the doubles title at the BNP Paribas Open at Indian Wells last week with U.S. teammate John Isner.

Sock, Isner and no. 14 Sam Querrey give the Americans three singles players ranked in the top 17 in the world, one of the deeper lineups it's been able to boast in recent years. Ryan Harrison (no. 53) and Steve Johnson (no. 54) round out the American squad.

"It's as deep as we've been since the Andy Roddick, James Blake, Mardy Fish era," Courier said. "It's nice, the team is shaping up well. It's a good draw on paper, but it's hard to say because we've had plenty of Davis Cup ties where we've been the heavy favorites on paper and had some problems."

Belgium finished as the Davis Cup runner-up in 2017, losing to Spain. It is unknown whether the Belgians will have top player David Goffin for the matches on the Belmont campus April 6th-8th.

The U.S. has won a record 32 Davis Cup titles overall, but hasn't taken home the title since 2007. The Stars and Stripes will look to take the next step towards returning the Cup to American soil in the matches against Belgium.

Courier is the one American participant that has experienced success in the event. He won the Davis Cup twice as a player, and told Newschannel 5 on Wednesday that he relishes the chance to help the U.S. get back on top now as the captain of the squad.

"It would be incredible on a personal level to be a part of a winning team as the captain," Courier said. "And our players are so dedicated to Davis Cup, it's not always an easy thing to say yes to when you have to get on a plane and travel to Serbia in February. It can be challenging, but these guys desperately want to win for themselves, for the team and for the tennis fans in America. We know how long it's been, we know American's won more of these than anyone and we want to desperately get back on top."

You can watch our exclusive interview with Courier above.