Vandy Gets Boost With Another Win Over Vols 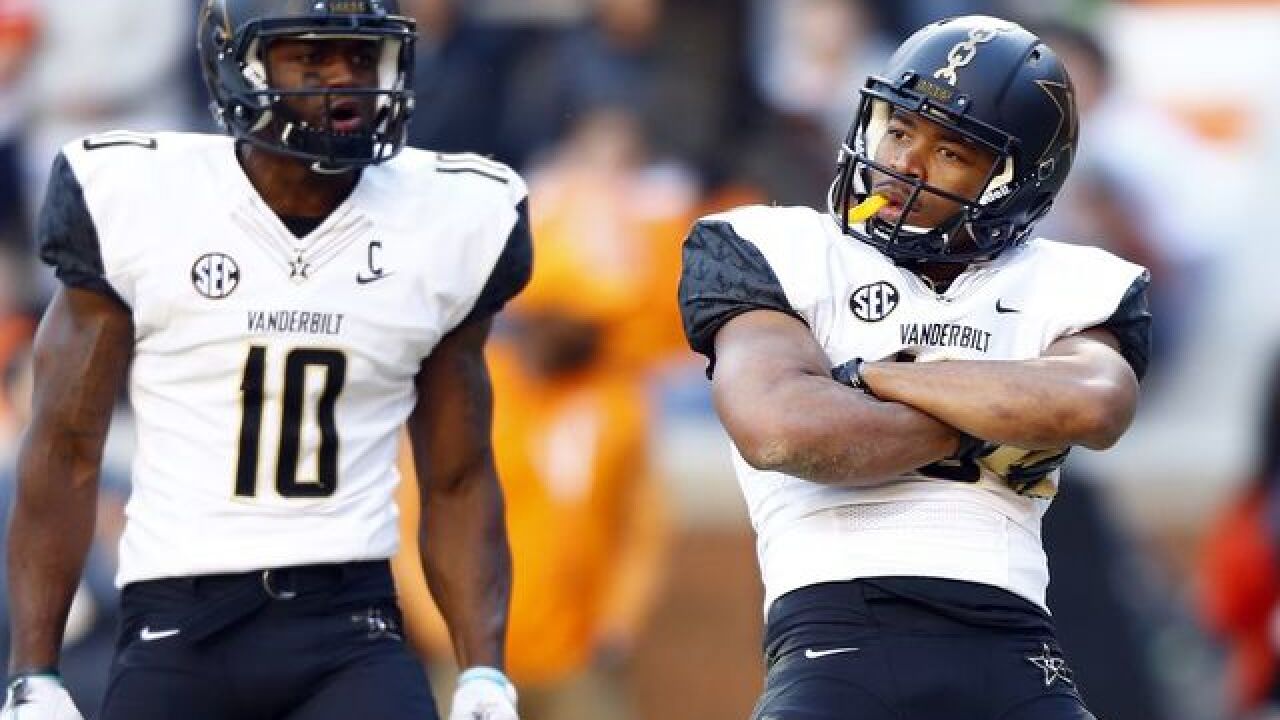 Copyright 2017 Scripps Media, Inc. All rights reserved. This material may not be published, broadcast, rewritten, or redistributed.
&lt;p&gt;Vanderbilt wide receiver C.J. Duncan (19) poses after scoring a touchdown in the first half of an NCAA college football game against Tennessee, Saturday, Nov. 25, 2017, in Knoxville, Tenn. (AP Photo/Wade Payne)&lt;/p&gt;

On a day when the only thing to play for was pride, Vanderbilt pulled away from Tennessee in the fourth quarter for a 42-24 victory that gives it bragging rights over its in-state rival yet again and a shot in the arm heading into the offseason.

Ralph Webb, Vanderbilt's all-time leading rusher, finished his career in spectacular fashion, rushing for 163 yards and two touchdowns on 25 carries as the Commodores beat the Vols for the fourth time in the last six seasons, a stat that once upon a time seemed like an impossibility against a rival that once won 28 of 29 games in this series from 1983-2011.

"I'm at an all-time high right now," an excited Webb said on the field after the game. "Wouldn't want to do it at no other place than here at Tennessee, giving them their first eight loss season."

Vanderbilt's win caps arguably the worst season in Tennessee history. Butch Jones was fired two weeks ago after a blowout loss at Missouri and the Vols were unable to right the ship under interim coach Brady Hoke the last two weeks, finishing winless in SEC play for the first time ever. Their eight losses are the most in school history.

But while Tennessee's attention now shifts to athletic director John Currie and his search for a new head coach, Vanderbilt now heads into the offseason with significant momentum. Vandy hasn't had this much success against Tennessee since the 1920's, allowing players, coaches and alumni to puff their chests out for the next 365 days.

"We finished the way we wanted to finish," Vanderbilt coach Derek Mason said after the game. "It's something special. These guys will sit around and talk about it when they're old men."

It's a fantastic sendoff for seniors like Webb and Trent Sherfield, who caught two touchdowns as the Commodores ran off 21 straight points in the fourth quarter to put the game out of reach. But it's also a massive boost for Mason after he watched his team stumble to seven losses in eight games after starting the season a promising 3-0.

Instead of talking about a winless SEC campaign, Mason will lead his team into the offseason on solid footing and with a budding star at quarterback. Kyle Shurmur seems to save his best for the Dores' biggest rival. He threw for a career-high 416 yards in Vandy's upset of Tennessee last year, and was equally effective Saturday, tossing for 283 yards and four touchdowns.

Shurmur set a Vanderbilt school record with 26 touchdown passes this season, eight of them to sophomore Kalija Lipscomb, who caught a 30-yard score on a flea-flicker in the second quarter. Those two along with a healthy Khari Blassingame should give Vandy an explosive offense behind a more mature offensive line next season.

If Mason's defense returns to it's usually solid form, the Commodores have a chance to take the strides in 2018 that they expected to take this season.

It wasn't the year Vandy wanted, but it finished with a bang. And the outlook as the team busses pulled away from Neyland Stadium Saturday night is much brighter than the view of the team in the other locker room.