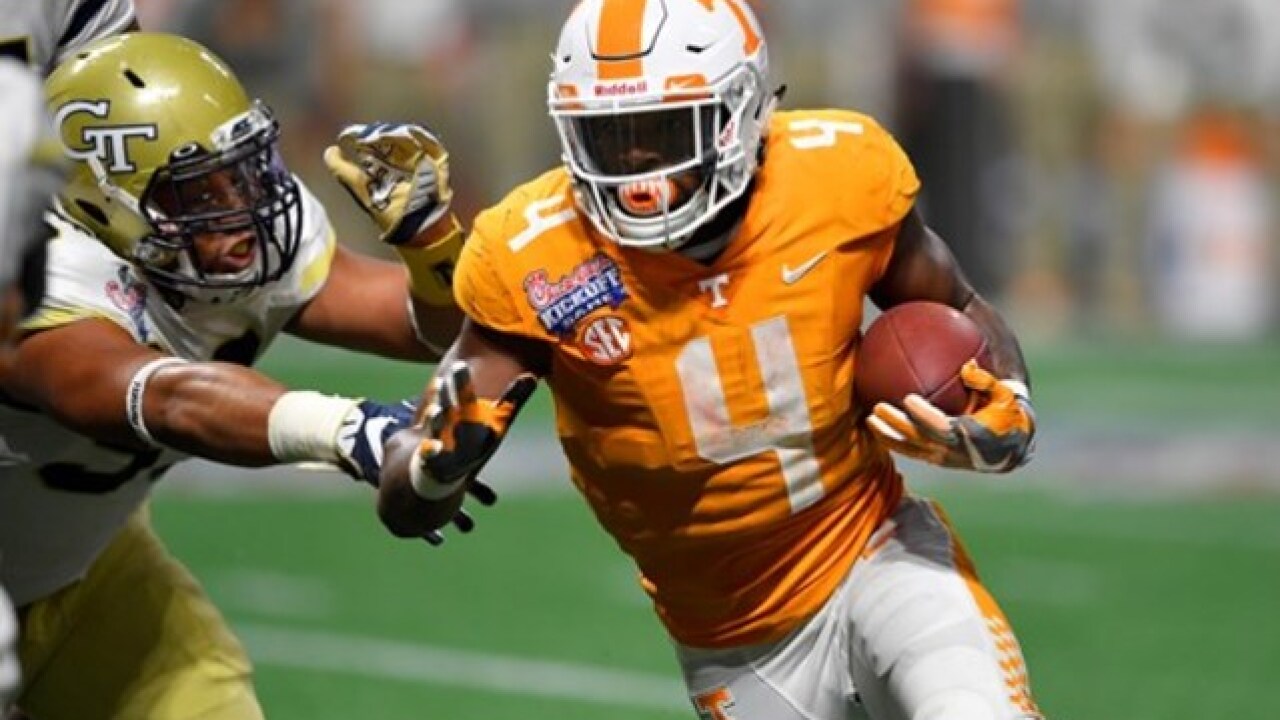 Copyright 2017 Scripps Media, Inc. All rights reserved. This material may not be published, broadcast, rewritten, or redistributed.
&lt;p&gt;John Kelly rushed for 128 yards and four touchdowns in Tennessee's 42-41 double OT win over Georgia Tech in the Chik-Fil-A Kickoff Game Monday night in Atlanta.&lt;/p&gt;

Joshua Dobbs, Alvin Kamara and Derek Barnett are all in the NFL, but this new version of Tennessee --"Team 121" as Butch Jones likes to refer to them -- shares their heart.

In a rally that will share space in the minds of Big Orange faithful with a comeback from 18 down against rival Florida or the Hail Mary win at Georgia last season, the Vols stormed back from 14 down in the fourth quarter and then beat Georgia Tech 42-41 in double overtime for a thrilling season opening win Monday night in the Chik-Fil-A Kickoff Game in Atlanta.

After TaQuon Marshall scored his fifth touchdown of the game in the second overtime, Georgia Tech head coach Paul Johnson elected to go for two and the win. Why not? The Yellow Jackets rushed for 535 yards against the Tennessee defense, 249 coming from Marshall himself on a Heiman-like 44 carries for a quarterback.

But this time the Vols defense stood up the Tech QB as he tried to turn the corner and his desperate attempt to toss a pass while falling to the ground fell incomplete as Tennessee players stormed the field in celebration.

"Really proud of our players," a jubilant Tennessee head coach Butch Jones said after the game. "We kept believing and we finished and found out a little bit about our will to win."

You can doubt the gameplans; the Vols gave up more than 600 yards of offense for the fourth time in five games dating back to last season, allowing more than 400 yards rushing for the third time in that span.

You can doubt the head coach and his goofy shticks; the latest of which seems to be a sideline trash can for the defense to dunk into after forcing turnovers.

But you can not doubt Tennessee's will to win. Not after yet another incredible comeback.

New quarterback Quinton Dormady looked lost for much of his first career start and the defense looked overwhelmed as Georgia Tech held onto the ball for more than 40:00 Monday night. But when the game was on the line the Vols found away, scoring three touchdowns in the final 21:00 of regulation and then blocking a field goal on the final play of the fourth quarter to force overtime.

Dormady finished 20-37 for 221 yards and two touchdowns to Marquez Callaway, who emerged as a monster playmaker after Jajuan Jennings had to leave the game late in the first half with an injury. John Kelly ran for 128 yards and four touchdowns, including the tying score with 1:29 left in regulation and both TDs in OT.

It was not pretty, but a win is a win.

Much like a year ago, Tennessee will need to play much better defense as the season moves along or it will be in big trouble, and the offense has to find a rhythm with Dormady or redshirt freshman Jarrett Guarantano, who did not play in the opener.

Jones and his new-look coaching staff will have to do their best work to get this young team to contend in the SEC East and live up to top 25 expectations. The Vols will be able to learn a lot from the film of this game and somehow, some way they will get to learn it coming off a win.

Because the Vols already possess the one trait that you can't teach, and that's belief. They showed that in spades Monday night in an improbable comeback win that will be remembered for some time.