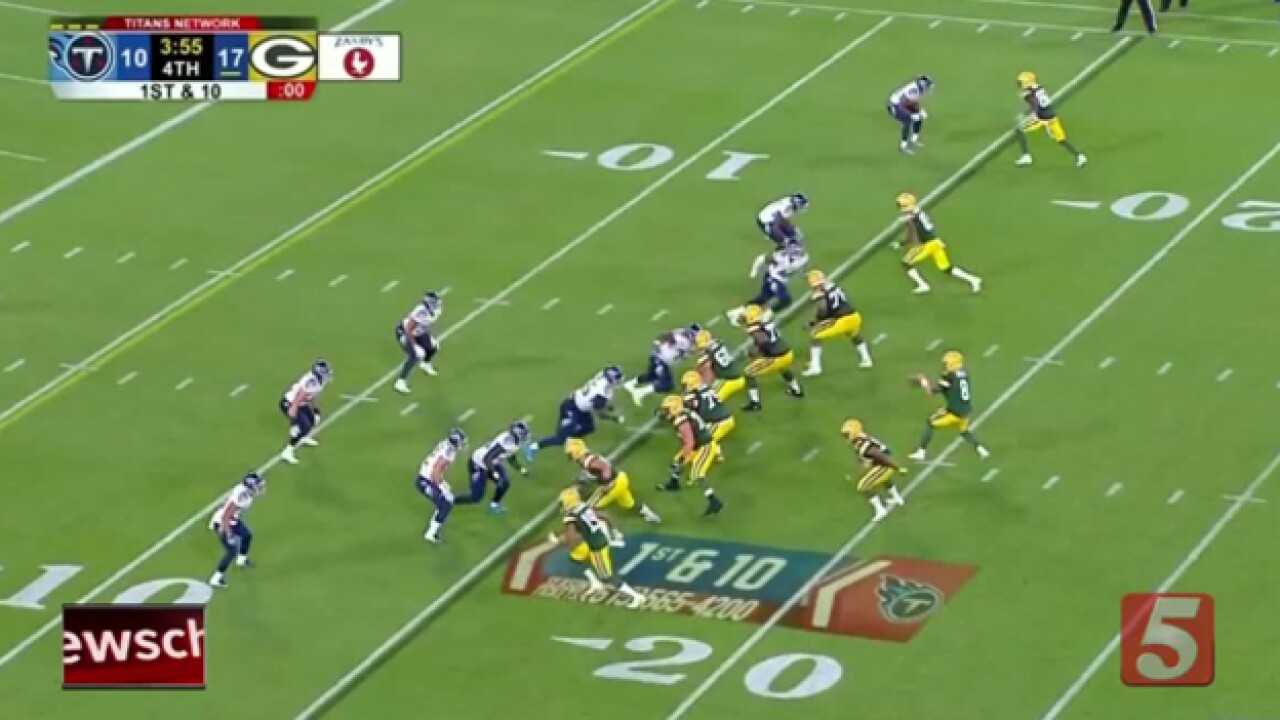 A new era of Titans football kicked off Thursday night as the Titans broke from the grind of training camp for their preseason opener against the Packers.

It was the first game for new head coach Mike Vrabel, the team’s new offensive and defensive systems and it was even the debut of the team’s new uniforms.

The Packers earned a 31-17 win courtesy of a blitz of 24 second half points from third and fourth team players, but it was still a productive first night for Vrabel’s top available players.

Here’s some of what we learned.

FAST START
The Titans could not have scripted a better start to the game with the first team offense driving 71 yards on nine plays for a touchdown.

Marcus Mariota looked comfortable in his first series in Matt LaFleur’s offense. First, he hit Nick Williams for 38 yards on third and seven. Then after a Derrick Henry run, a seven-yard bootleg and a defensive penalty, Mariota hit Darius Jennings for a four-yard touchdown on third and goal for a 7-0 lead.

“That's kind of what we talked about coming out – carrying over from the scrimmage, it looked like they did that,” Vrabel said.

BUSTED COVERAGE
The stars of training camp through two weeks have been the Titans’ defensive backs. Cornerbacks Malcolm Butler, Logan Ryan and Adoree’ Jackson have at times created a “no fly zone” for the team’s inexperienced receivers.

But the trio failed to shut down the Packers young wide outs, despite Aaron Rodgers not playing, in their one series of action.

Jackson gave up a pair of nine-yard completions on Green Bay’s first and third play from scrimmage, and then Butler was burned by Davante Adams on a 48-yard strike down inside the Tennessee five. The Packers scored a couple plays later when Brett Hundley found Jamaal Williams out of the backfield and he made Jayon Brown on the way to the end zone for an eight-yard touchdown.

Nothing about one series of the first preseason game should be a cause for concern, but it was not the type of message a much improved secondary wouldn’t to send in their first live action of the year.

GOOD REBOUND
Dean Pees came out of retirement last winter for the opportunity to serve as Mike Vrabel’s defensive coordinator in Tennessee. The first series notwithstanding we saw flashes of what Pees’s defense can be.

After allowing the Packers to march 75 yards on seven plays during their opening drive, the Titans buckled down, without the help of their secondary stars, to hold Green Bay without another point until the second half when mainly third team players were in the game.

Second round pick Harold Landry continues to make the most of his opportunities in Brian Orakpo’s absence. The rookie showed his burst off the edge by sacking and stripping Hundley on Green Bay’s second possession. The Packers recovered the fumble, but it essentially ended the drive.

Fellow outside linebackers Gimel President and Sharif Finch also showed an ability to create pressure. President hit Hundley as he was throwing early in the second quarter leading to a Brown interception. Finch, an undrafted rookie out of Temple that has consistently earned the praise of coaches during camp, caused consecutive hurries on a goalline stand just before halftime and had a sack in the third quarter.

“That’s what we expect of them,” Vrabel said. “I think that's what we talked about the whole training camp and since we've been here – having a competitive spirit and being mentally and physically tough while being able to be conditioned and disciplined to do it every day.

OFFENSIVE IDENTITY
Matt LaFleur was hired to breathe life into a Titans offense that failed to live up to expectations last season. While the 38-year-old certainly didn’t empty the playbook on night one of the preseason, we did get an idea of what the Titans offense might look like.

They still ran often out of double tight end sets, but also used some three and four receiver sets (despite limited numbers there) and bunch formations. He also showed a willingness to get Mariota on the edge to use his legs.

Besides the opening drive TD, the Titans also put up points on their third drive as Blaine Gabbert directed a 13-play, 74-yard March for a field goal. The drive started with back to back throws, first to Tajae Sharpe for 20 yards and then to Taywan Taylor for nine yards. It was a welcome sight after the Titans ranked last in the league in number of first down throws a year ago.

A HEAVY LOAD OF LAUNDRY
If there was one true negative to the Titans performance on the field Thursday it was the double-digit penalties. Just in the first half alone, Tennessee committed eight infractions for 77 yards.

Some of that comes from being a first preseason game and from constant substitutions, but the result was not acceptable to the head coach.

“We just have to clean up the penalties, Vrabel said. “That's frustrating. We're really just hurting ourselves.”

TAKE IT EASY
The Titans have been been hampered by injuries throughout training camp and they did not take any chances Thursday night.

Brian Orakpo and rookie Rashaan Evans didn’t even make the trip to Green Bay after missing more than a week of practice. Corey Davis dressed, but did not see action after missing practice Monday and Tuesday. Pro Bowl tight end Delanie Walker was given the night off and Michael Campanaro was also held out on offense, while Bennie Logan and Kendrick Lewis sat out defensively.