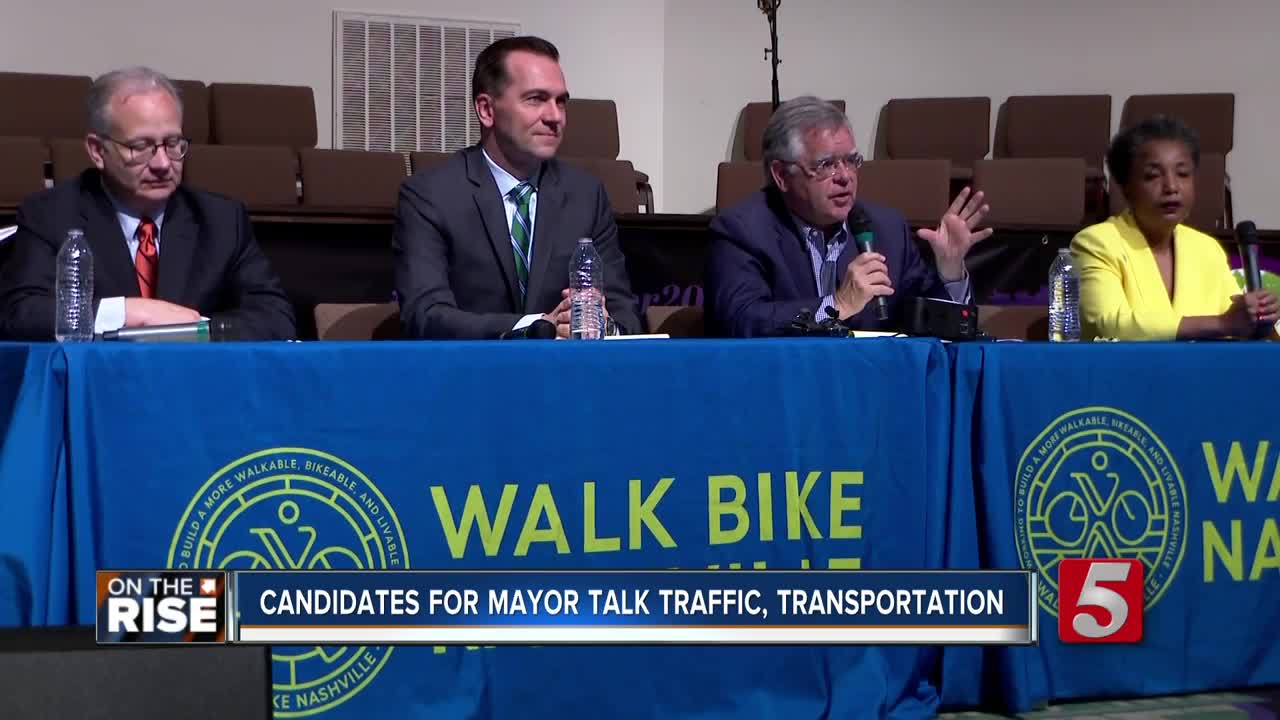 For the first time Wednesday, the four major Mayoral Candidates shared a stage to break down traffic and transportation concerns in our city on the rise. Walk Bike Nashville hosted the forum which focused on traffic, transit and mobility.

NASHVILLE, Tenn. (WTVF) — For the first time Wednesday, the four major Mayoral Candidates shared a stage to break down traffic and transportation concerns in our city on the rise. Walk Bike Nashville hosted the forum which focused on traffic, transit and mobility.

"To us walking, biking, transportation are really the issues that connect all the other issues," said Walk Bike Nashville Executive Director Nora Kern, "whether it's affordable housing or schools or jobs."

Candidates agreed that traffic and transportation are a top priority. They say sidewalks and greenways need attention, as alternative ways to get around which will help get cars off the road. Especially with office space for 40,000 more jobs about to open downtown.

Dr. Carol Swain said she never learned how to ride a bike as a child in a poor neighborhood, and expressed hesitation about the effectiveness of bike lanes. She says law enforcement would be the initial focus were she to take office, saying that increased patrols would help cut down on dangerous crashes that cause congestion.

"My fist priority would be to make sure our police force is fully staffed," she said.

The other three candidates seemed to agree that bike lanes are a part of Nashville's future. Mayor David Briley, who called himself a retired bike commuter, said misinformation and lack of support has stalled several bike lane projects across town.

Council Member John Cooper said the city needs to regain public trust with how money is spent. He advocated for re-thinking the way we develop new land to include the greater connectivity needs of the community at large. And he cited several traffic calming examples he wants to see in neighborhoods:

"As we all know traffic calming needs to be a thing. We need to focus on it and that's physical measures: reduce land widths, speed tables, raise crosswalks, roundabouts, curb extensions, better lighting," he listed.

And State Rep John Ray Clemmons said the focus should not just be on the downtown area, but needs like connected bike lanes and traffic calming in the suburbs too. He pledged to use his state-level experience to create regional solutions to traffic problems. And in the downtown area he advocated for cracking down on companies that block lanes during construction at peak traffic times.

"We're not charging these developers enough for the increased traffic that they're putting on our roadways," he said.

Mayor Briley is touting investments made in the last year - like $30 million for sidewalks and $10 million for greenways, along with plans to develop Dickerson Pike as a transit route to the Hendersonville city line and creating a central control center to change traffic lights to ease congestion. He's hoping voters will send him back to the Mayor's office to continue the job.

When asked about another transit referendum, where voters could decide on a funding source for the issue of transportation, Clemmons and Cooper both said it would happen in their first term. Briley said it would be a few years down the road, after the city had a change to beef up the current transit system. Swain said no to a future referendum, though she did advocate for a vanpooling system akin to an Uber for vans to replace WeGo's public buses.

One thing the candidates all agreed upon: the current regulations for scooters are not working. They unanimously said the city needs to revisit regulations and infrastructure to keep people on scooters safe as they navigate Nashville.

Election day is August 1. NewsChannel 5 is teaming up with The Tennessean and Belmont University to host a mayoral debate on June 25th.

Tune in on air and online as we bring you the debate live from Belmont's campus.