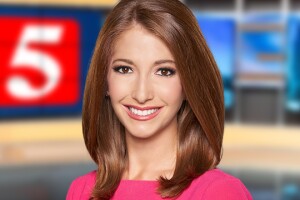 Many viewers will recognize Rebecca from her time as a reporter on the NewsChannel 5 evening newscasts. With the area booming, the station elevated her to the morning anchor team to help fill a vital role covering all things transportation in January 2017.

She arrived in Middle Tennessee after working two years as a reporter and morning co-anchor at FOX 25 in Oklahoma City. There she spent much of her time chasing tornadoes, driving through hail storms and advocating for members of the community who weren’t getting a fair shake. Rebecca loves holding people in power accountable. When she worked at KCEN in Waco, Texas, her series of reports on a sheriff accused of sexual harassment preceded an election where citizens voted him out of office. Her crowning achievement in Oklahoma City was a series of reports on long-time contaminated water that led to dozens of health problems for people in the surrounding communities. She traveled to the EPA to find out why it was taking decades to clean up the mess.

Rebecca hails from the "other" UT! A proud Longhorn, Rebecca graduated with honors from the University of Texas at Austin, earning degrees in both journalism and government. While at school she was a cheerleader for the Horns before she took time off the field to spend a semester in Tel Aviv, where she attended university classes and lived for 7 months.

Rebecca joined the NewsChannel 5 team in May 2015 and immediately fell in love with Nashville. You can watch her weekdays on NewsChannel 5 this morning, where she’ll help you avoid the busy roads and crashes across Middle Tennessee. She also reports on transportation-related stories during the evening news at 6 p.m.

When she's not at work you can find her jogging (well - mostly walking) with her husband and their dogs Rondo and Zoe, or trying every new restaurant in town. Really - she wants to try all of them.

She and her husband are also avid woodworkers and hobbiest designers and have renovated multiple homes.

Rebecca wants to be a big part of the community, so feel free to email her for help with community events or story ideas.