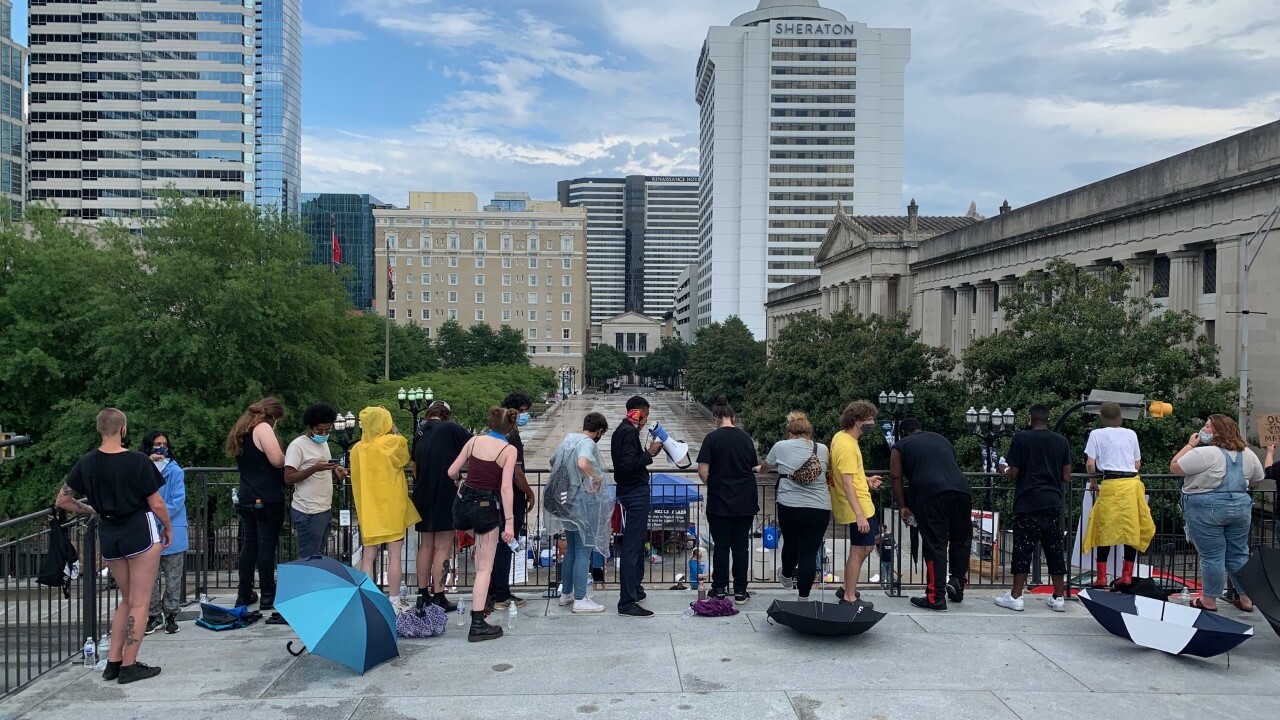 Protesters handcuff themselves to the Legislative Plaza balcony.

NASHVILLE, Tenn. (WTVF) — Activists continued to protest outside the State Capitol while lawmakers inside the capitol debated a bill targeting demonstrations on state property.

On Wednesday, lawmakers passed a bill pertaining to the Capitol grounds and surrounding areas. Meanwhile, about a dozen protesters were handcuffing themselves to the Legislative Plaza balcony, demonstrating against police brutality.

Nashville's first large protest in the wake of the deadly shootings of George Floyd and Breonna Taylor became destructive when protesters damaged a statue on the Capitol grounds.

A separate group of activists, known as the "People's Plaza," has been actively protesting for two months near the Capitol. They began protesting police brutality and the placement of the Nathan Bedford Forrest bust in the Capitol. Many of them have been arrested during that time for criminal trespassing.

They often demanded that they be allowed onto the Captiol grounds, claiming it should be accessible to the public. They have also used chalk to write messages on portions of the grounds.

A reporter asked lawmakers if the bill was a result of the "People's Plaza" demonstrations. Lt. Gov. Randy McNally replied, "It partially is for that and partially it's to prevent what has happened in other cities like Portland and Washington D.C."

It redefines and builds upon a law passed following the Occupy Movement in 2011 in which lawmakers intended to outlaw camping on state property. It also creates a harsher punishment for anyone who assaults a first responder or law enforcement officer.

The bill makes camping on state grounds illegal. It describes camping as remaining on the grounds any time between 10 p.m. - 7 a.m. and does not allow the placement of any personal items for future use, furniture, tent, tarp, sleeping material.

Law enforcement must first give any offenders a warning, but if they still do not leave the area the person will be arrested and charged with a Class E felony and any items on the property can be seized by law enforcement.

A felony conviction results in an individual’s right to vote in Tennessee.

The bill also addresses the assault of first responders and law enforcement officers. It describes assault as knowingly causing bodily harm as well as causing physical contact that a reasonable person would regard as extremely offensive or provocative like spitting. Anyone charged with assault faces a Class A misdemeanor and aggravated assault carries a Class C felony.

"[It] cracks down on criminal elements out there that are unfortunately making it very difficult for folks to even visit this capitol and really throughout the state; any time a law enforcement officer is assaulted, that is an assault on the state of Tennessee and all of our people because that officer is here to protect and serve us," said Rep. Lamberth.

Democrats, however, had a very different take on the bill.

"...We have a segment of our society that's calling out for help, please listen to us; give us a seat at the table; we can't breathe and what was the response of the Tennessee Republican Party? They put a knee on their neck and I'm embarrassed. I'm ashamed," said Representative Bo Mitchell.

The four democratic lawmakers who spoke made it clear that they believe the bill was "unnecessary" and not fitting of the term "criminal justice reform."

The bill was passed by both the House and Senate and is now headed to the Governor's desk for his approval. Once law, it will take effect on October 1, 2020.