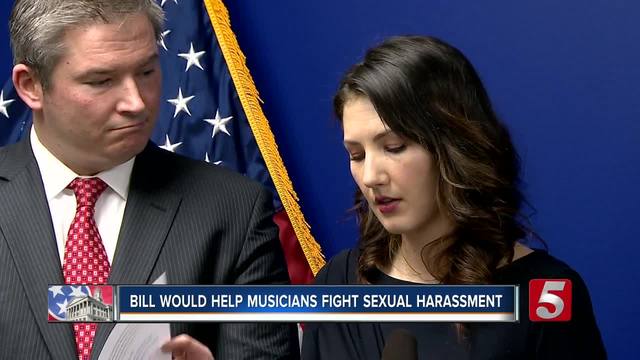 A man exposed himself to a teen at a bus stop in East Nashville while she waited to go to school.

A bill in the state legislature would protect artists from sexual harassment in the country music industry.

In order to keep contracted musicians from being victimized, the bill would allow a person to bring sexual harassment suits against an employer. According to the bill's sponsor, state senator Jeff Yarbro, it would allow certain protections usually reserved for people who are full time employees, but for people who have a contract relationship with their employer.

To emphasize this point, Yarbro and the state house sponsor Brenda Gilmore were joined by former country music artist Katie Armiger for a press conference Monday. Armiger starter her career at 16 years old, but said by the time she reached her early 20s, had seen a darker side of the country music industry.

"By the time I reached 18, I had been exposed to behaviors and expectations that made me uncomfortable," said Armiger. "It ranged from innuendos and crude comments to outright unwanted touching. Not only was it confusing, but it was humiliating."

Yarbro said the bill was written with the intent to protect all people from sexual harassment in the workplace.

"All of our workplaces should be safe and all of our people, regardless of what forms they fill out or what precise legal formalities their employment falls into, should be protected," said Yarbro.