Twelve tornadoes confirmed in Tennessee and Ketnucky in June 21 storms 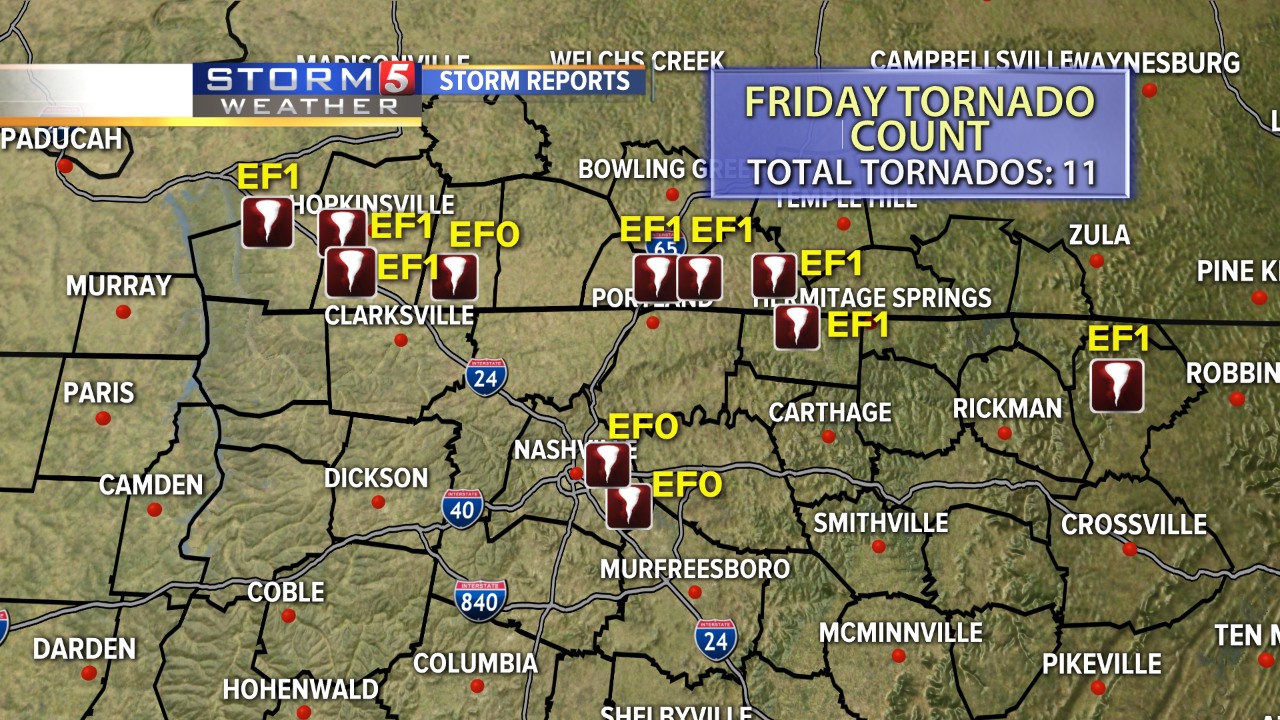 1. EF0 Davidson County
The EF0 tornado touched down in Antioch during severe weather Friday night. According to the NWS, the EF-0 tornado reached max wind speeds of 85 mph and covered more than a mile. The tornado touched down near the intersection of Anderson Road and Country Way Road before taking a U-shaped path snapping and uprooting trees along its way.
Significant roof and siding damage was reported to several homes along Leatherbury Court, Seasons Lake Court and Seasons Drive. The NWS estimates the tornado lasted between 8:04 and 8:06 p.m. Friday night.

2. EF1 Trigg County
The EF1 tornado hit an area near Cadiz, Kentucky. Preliminary storm damage results showed the EF-1 tornado hit the east and southeast of Cadiz in Trigg County Friday. Officials are still working to gather the details on its damage and path.

3. EF1 Christian County
The EF1 tornado hit an area near Gracey, Kentucky. It was on the ground for 0.9 miles with winds that reached 100 miles per hour. Three empty grain silos were destroyed. Many large, old trees uprooted and snapped. And one house's roof was partially blown off.

4. EF1 Christian County
The EF1 tornado touched down near Herndon, Kentucky. Winds reached 105 miles per hour it was on the ground for 0.6 miles and had a width of 175 yards. A total of eight to ten homes damaged. Numerous large trees were snapped and uprooted.

6. EF1 Allen County
The EF1 tornado hit Mount Aerial, Kentucky. Winds reached 95 miles per hour and it was on the ground for 4.6 miles. The tornado touched down near the Horseshoe Ford Road and Horseshoe Bend Road intersection. Numerous large hardwood were trees split, twisted, and uprooted. A barn on Mayhew Road a large was uplifted and removed from its foundation with several cedar and maple trees twisted and snapped. Several barns and outbuildings had roof damage as well. A man died in Allen County when a tree fell on his truck, but it was not a direct result of the tornado.

8. EF1 Macon County
The short but intense EF1 tornado touched down in northern Macon County near Green Valley Road and moved Eastward across Oak Knob Road and along Underwood Road Before lifting. Hundreds of trees were snapped and uprooted along the pass and a few homes were damaged as well as barns and outbuildings.

9. EF0 Todd County
The tornado's path was 2.8 miles and wind speeds reached about 80 miles per hour. The tornado started along Hammacksville Rd. south of Trenton. It uprooted and broke several trees.

10. EF0 Davidson County
The brief EF0 tornado douched down in the Stones River Bend Park in Donelson and moved southeast, snapping several trees along the river. It blew down several trees,and heavily damaged homes, some of which were also damaged in a severe microburst in April of 2017.

11. EF1 Allen County
The tornado's path was 1.6 mile long and winds reached 90 miles per hour north of Hayesville. The tornado damage was intersparsed among straight line wind damage. Several trees were twisted and snapped and multiple barns were damaged.

12. EF1 Trigg County
The EF1 tornado had wind speeds of 100 miles per hour and its path stretched just over two miles. It began north of Woodland Trace and Silver Trail Road. Hundreds of trees, were snapped and uprooted.