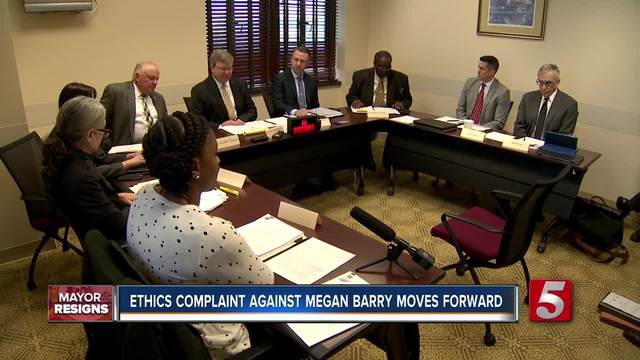 An ethics complaint filed against former Nashville Mayor Megan Barry is moving forward, despite her resignation on Tuesday. 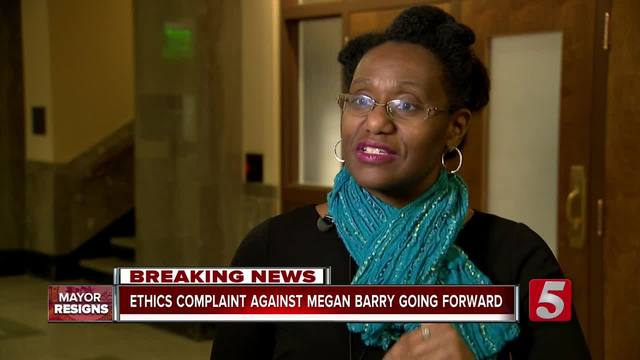 An ethics complaint filed against former Nashville Mayor Megan Barry is moving forward, despite her resignation on Tuesday.

The Board of Ethical Conduct voted Wednesday to hold hearings based on a complaint filed by a local group called "Community Oversight Now."

BREAKING: Board of Ethical Conduct approves hearing surrounding the appearance of @MayorMeganBarry preferential treatment of Sgt. Forrest, based on the overtime he was paid. @NC5

The decision to hold the hearings -- in which the community group and others would appear before the Board -- is the next step in the ethical complaint process.  The hearing has yet to be scheduled.

The Board voted to focus the hearings on two specific elements of the ethics complaint.

The first hearing will focus on whether Barry's affair with Metro Police Sergeant Rob Forrest may have influenced her decision regarding a community oversight board for the Metro Nashville Police Department, and if so, whether that violated Metro's Standards of Conduct.

The second hearing will focus on whether Barry's relationship with Forrest "created the appearance of giving preferential treatment" because of the increased overtime he received as Barry's head of security.

Questions Remain About What Will Happen At Hearings

There are several questions about what specifically may happen at the Board of Ethical Conduct hearings.

Metro Code says during the hearing, the parties involved -- in this case, Theeda Murphy with Community Oversight Now and former Mayor Barry -- may submit material to the board, may present their opinions and facts to the board, and can even call witnesses to give testimony under oath and to be cross-examined.  Board members may ask questions of either Murphy or Barry, their legal counsel or any witness at any time.

However it's not clear whether the board can compel testimony from witnesses with a subpoena.  It's also unclear whether all testimony will be held in a public forum, or whether some may be allowed to take place in private, before being presented to the board at a public meeting.

Metro Clerk Elizabeth Waites, who serves as the secretary to the Board of Ethical Conduct, says the board has scheduled a meeting for March 28 at 3 p.m. to discuss legal procedural matters such as whether the board has subpoena power.

In making the determination to hold hearings on two specific ethical issues, the Board of Ethical Conduct veered slightly from the suggestion of its legal counsel -- Kevin Klein of Klein Bussell, PLLC -- who recommended in a report authored last month that the board only hold a hearing on the issues surrounding Forrest's overtime.

In a related matter Wednesday, the board also discussed an ordinance filed by Metro Councilman Steve Glover that would expand the purview of the Board of Ethical Conduct to also include matters surrounding Executive Orders issued by the mayor.  In the Klein report, the board's legal counsel recommended against investigating the portion of the ethics complaint concerning an executive order covering ethics and conflicts of interest that Barry issued in 2016.  The boards legal counsel argued that under current law, the board didn't have the authority to look into executive orders.

It's unclear whether any future law change could apply retroactively to the currently-filed ethics complaint.

Actions Available to the Board of Ethical Conduct:

At the conclusion of the hearings, the Board of Ethical Conduct has four actions it can take, according to Metro Code.

It can recommend to the Metro Council that an elected official resign their position, or be censured -- an act of formal rebuke.

Mayor Barry has already agreed to pay $11,000 in restitution under the terms of her plea deal.

Because Barry has already resigned and the District Attorney has already dealt with criminal charges, Board of Ethical Conduct members said today those options available to them may appear to be moot.

It's unclear whether Metro Council could censure the former mayor after she has already stepped down from her position.

The Board of Ethical Conduct consists of six members -- five of whom are selected from various community organizations and are not employed by Metro government.  The president pro tem of the Metro Council -- a position currently held by Councilman Bill Pridemore -- also serves on the board, but they do not get to vote in its decisions.

The Board of Ethical Conduct hearing is separate from a Metro Council Special Committee Investigation that is moving forward as well.