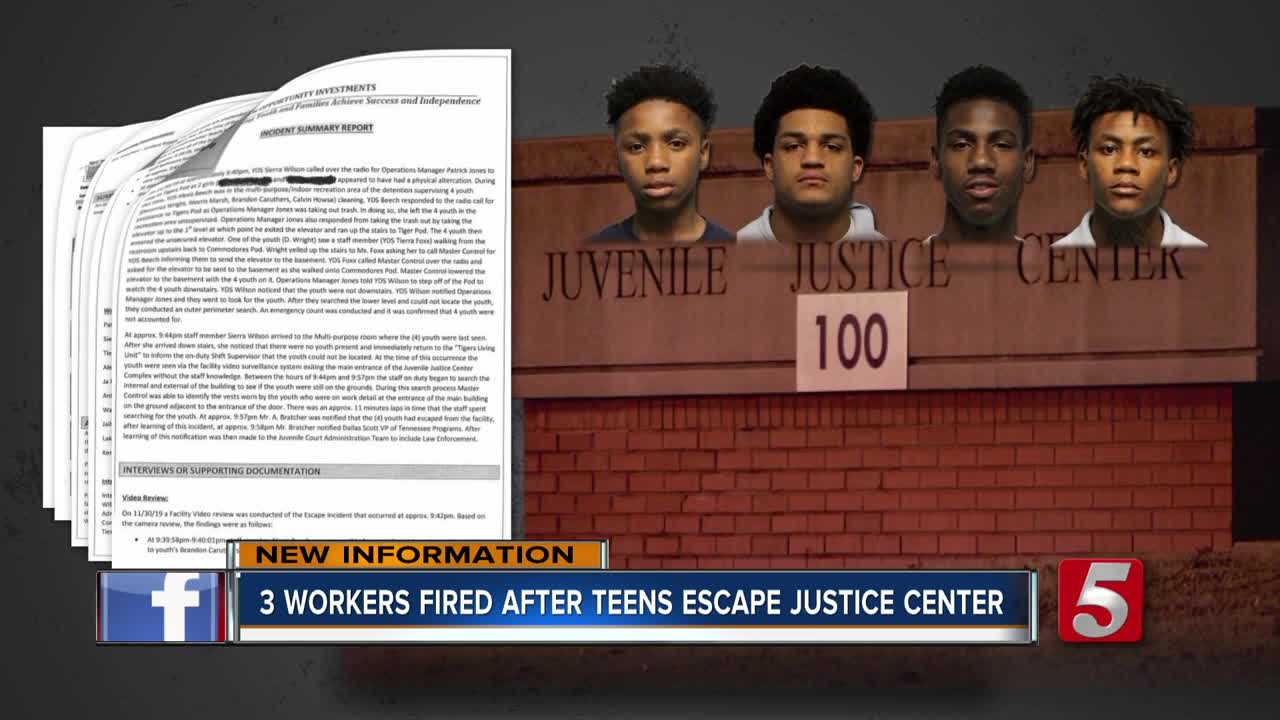 Three workers were fired after four "dangerous" teens escaped from the Juvenile Justice Center over the weekend. 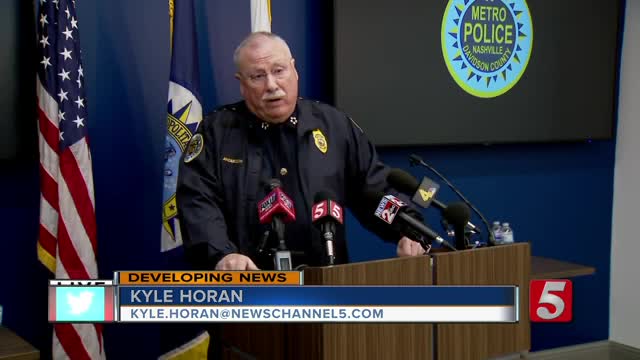 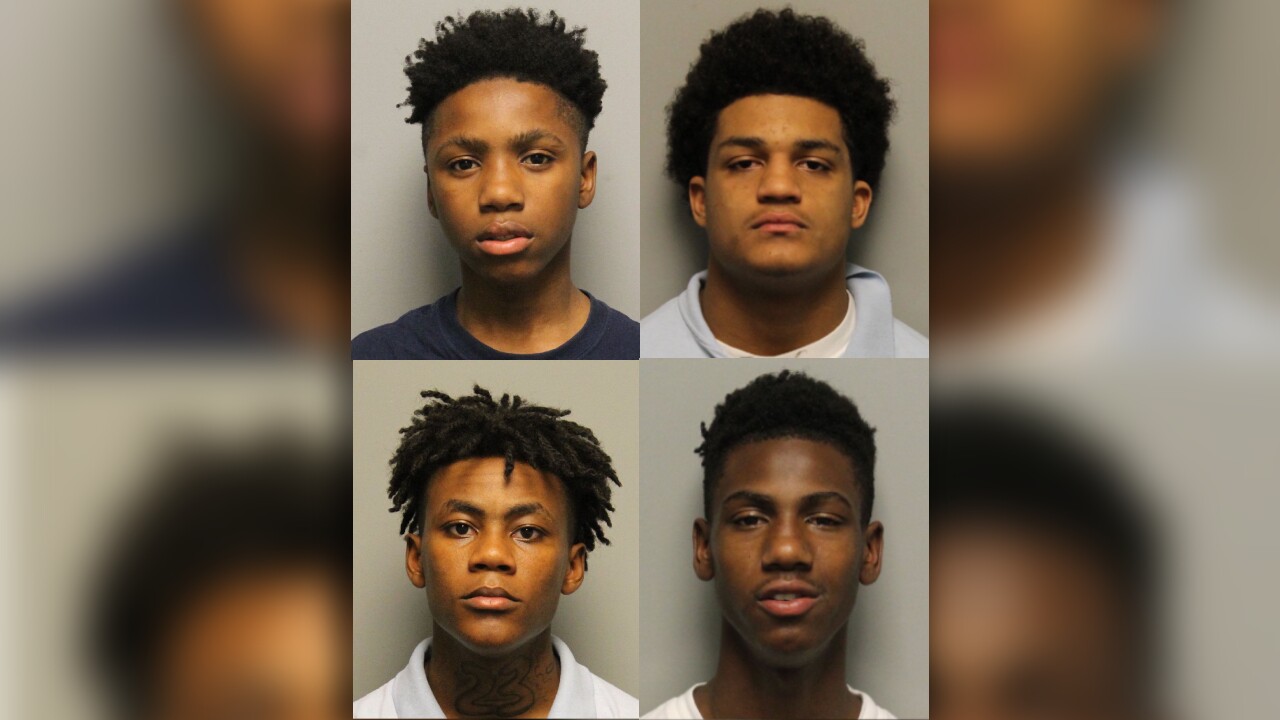 Decorrius Wright, 16, Morris Marsh, 17, Brandon Caruthers, 17, and Calvin Howse, 15 were outside their cells after the standard 9 p.m. bedtime because a supervisor asked them to help clean inside. When their supervisor left the group to break up a fight somewhere else in the facility, the four somehow managed to get onto an elevator that was left open and convinced a staff member to send the elevator to the basement, which is an unsecured area.

Sinback said the staff member believed one of the supervisors was on the elevator with them and called to master control to request it be sent to the ground floor. The teens then simply walked out of the building through the public area of Juvenile Court, Sinback said.

A report issued by Youth Opportunity Investments -- a contractor that staffs and helps run the Juvenile Justice Center -- says the teens should have been in their assigned rooms. But a shift supervisor allowed them to clean, because he said the building "needed to be cleaned."

The report goes on to say after staff learned of the escape "the staff on duty began to search the building to see if the youth were still on the grounds." Even though their contract with the city clearly states "Contractor shall not attempt to apprehend juveniles who have escaped the Facility" and "In the event of an escape... Contractor will immediately call 911"

But instead, the supervisor on duty notified the facility director that the teens were missing at 9:57 p.m. and even chose to contact a corporate Vice President 13 minutes before calling police. The supervisor drove around in his car looking for the group and did not call the emergency Metro Police number until 10:22 p.m.

“We know now that call was severely delayed prior to the juveniles actually escaping,” said Police Chief Steve Anderson.

"[Earlier notification] would have allowed us to establish a pretty tight perimeter had we been notified the second the staff realized these youth have gone missing," said Whited with the Juvenile Crime Task Force.

Anderson described the workers' actions as "a lot of gross negligence."

A hearing for Wright that was scheduled for Monday is now being postponed. Wright is suspected of shooting the gun that killed musician Kyle Yorlets in February. In court, attorneys asked for the hearing be postponed to December 10 and 13.

Marsh is also accused of murdering Charlie Easley, 19, at the Point Breeze Apartments on Lemont Drive in April. The other two face armed robbery and gun possession charges.

Brandon Caruthers was added to the TBI's Top 10 Most Wanted list Monday evening.

Police officials say they have no reason to believe the teens have left Davidson County.

Originally, Metro Police said the teens were spotted at an Exxon on Trenton Road in Clarksville Sunday morning, but they have since retracted that report. After review of the video, it does not appear to be the teens.

The teens are considered extremely dangerous. If you see them, call the Emergency Communications Center immediately at 615-862-8500.

The situation is being reviewed by the Davidson County Juvenile Court including if the fight in the "Tiger Pod," where teenage girls are kept, was a distraction to allow the teens to escape.

In response to the escape, immediate measures have been taken including limiting access to the facility elevator to supervisory staff.

On Monday, Youth Opportunity Investments, fired three workers and suspended one other who was involved in the escape. The staff members include Patrick Jones, the supervisor who left to go to the Tiger Pod, Tierra Fox, who called the elevator to go down, Alexis Beech, who was supposed to be watching the teens as they were cleaning and Ja Peers, the master control staff who sent the elevator down.

By Monday evening the YOI released a statement saying the four employees had been suspended:

"Youth Opportunity is working closely with the Juvenile Court of Metropolitan Nashville and Davidson County to assess the circumstances that led to this unfortunate incident and to develop enhanced security measures that will prevent similar situations in the future. Youth Opportunity continues its internal investigation and, pending the results of the investigation, four of its employees have been suspended. Youth Opportunity has provided a safe and secure environment for the youth and the citizens of Nashville.

The City of Nashville has seen great improvement in the quality of services provided at the Davidson County Juvenile Justice Center under the management of Youth Opportunity. Since Youth Opportunity began management of the facility in July 2015, many innovative programs have been established to provide the youth entrusted to it with education and mental health opportunities that help prepare them for productive lives upon their release. Youth Opportunity is grateful for the efforts of the state and local police agencies that are working tirelessly to apprehend the four youth.

The City of Nashville has seen great improvement in the quality of services provided at the Davidson County Juvenile Justice Center under the management of Youth Opportunity. Since Youth Opportunity began management of the facility in July 2015, many innovative programs have been established to provide the youth entrusted to it with education and mental health opportunities that help prepare them for productive lives upon their release. Youth Opportunity is grateful for the efforts of the state and local police agencies that are working tirelessly to apprehend the four youth."

“I have become increasingly concerned about the contract employees’ operation of the detention center since first being briefed on the initial details of the escape,” Chief Anderson said in a press release. “I share Juvenile Court leadership’s concerns on several fronts, not the least of which is the 35-plus minute lead time the escaped teens had before 911 was called. The Major Case Task Force will be looking closely at this entire event while our other teams do everything they can to bring the four back into custody.”

He said the Major Case Task Force was tasked with the investigation so that MNPD’s Youth Services Division and Juvenile Crime Task Force can devote their full attention to finding the teens and anyone who may be helping them hide. They believe the teens have probably split up and are more than likely getting help from others.

"We know they’re getting assistance to what level or degree...how many are helping, don’t know, but we know it’s not them acting alone," said Captain Widener with the Youth Services Division.

Anyonw with information on where they could be was encouraged to call police.