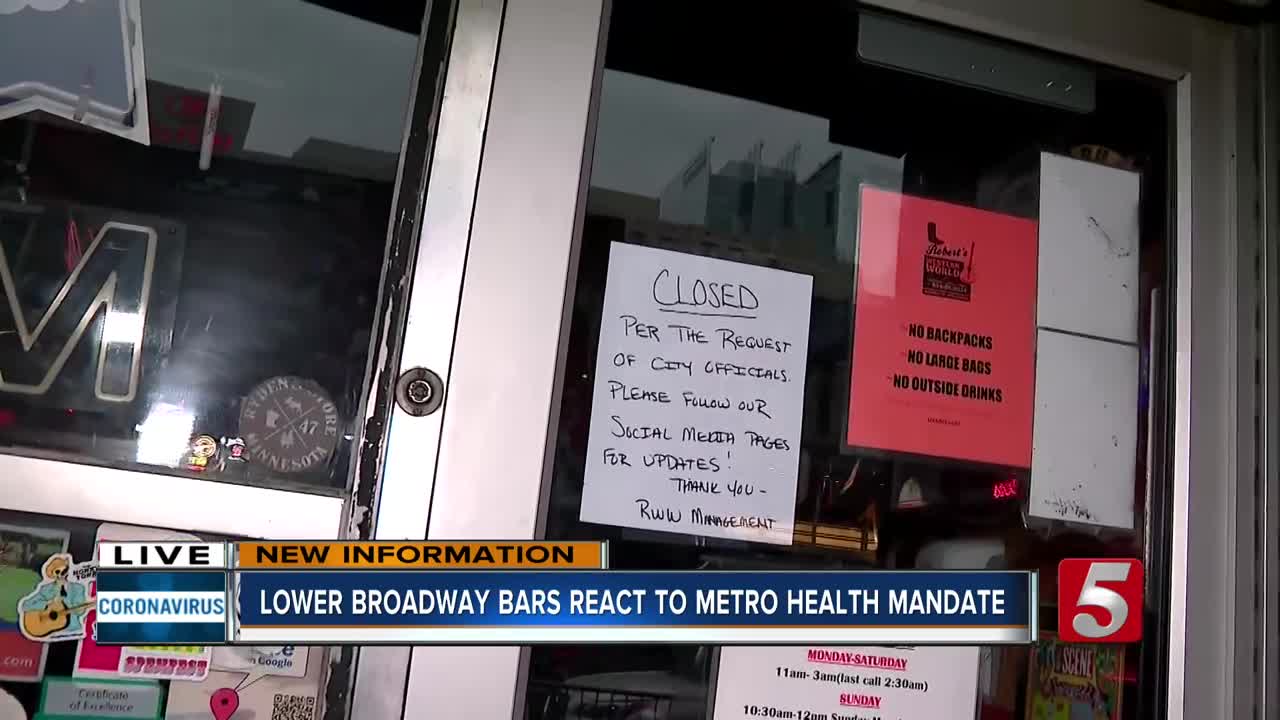 Businesses in downtown Nashville were forced to close their doors just after a city mandate that required bars to stop operations amid the COVID-19 outbreak. 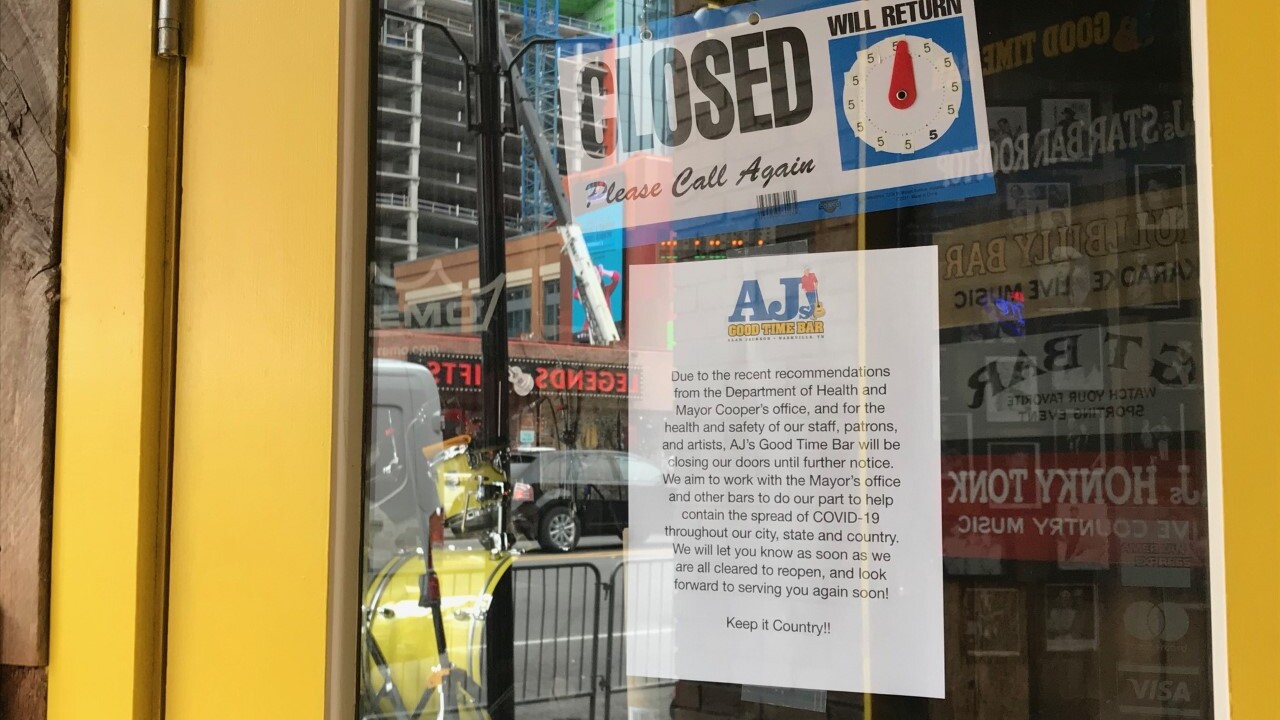 NASHVILLE, Tenn. (WTVF) — Businesses in downtown Nashville were forced to close their doors just after a city mandate that required bars to stop operations amid the COVID-19 outbreak.

A public health emergency was declared on Sunday before the number of cases reached 52 in Tennessee, the most being in Davidson County at 25 as of Monday afternoon.

Despite Mayor John Cooper’s recommendation to close bars until further notice being approved, some bars on Lower Broadway including Nudie’s, Rippy’s and Honky Tonk Central could be seen operating with live music performances and visitors on Monday.

Layla Vartanian of Layla’s Honky Tonk was one of the businesses who chose to stay open on a partial schedule. She wanted to comply with the city’s order for safety purposes but still be able to serve her employees who are fearful about paying their bills.

“Whether we’re closed or open, business is pretty much affected,” Vartanian told NewsChannel 5. “By opening partially, we’re helping the mental psyche of my employees right now.”

Her business would open at noon and serve food, limit capacity to no more than 50 people and close by 8 p.m. The mandate asked restaurants to limit seating to 50 percent of capacity, with a cap of 100 people, and restaurant bars to not allow standing.

The day after the mayor’s announcement, Broadway seemed lighter than usual. In her 23 years as a honky tonk bar owner, Vartanian has never described Broadway looking like a ghost town before.

“I’ve never seen anything like this. We’re at a scary time right now but people shouldn’t panic,” she said.

Steve Smith, owner of Tootsies, Honky Tonk Central and other downtown business, said he’s operating fully until a mandate is handed down by the governor. His attorney said they plan to file a lawsuit, and argues the decision isn’t putting profit over people’s health but protect their 800-plus employees’ livelihood.

An official with Metro’s coronavirus task force said they’re working on an official order to require bars to close that are permitted by Metro Public Health.

However, Smith's publicist released the following statement Monday evening, stating she would be cooperating with the Mayor's order.

"In cooperation with the Mayor's office, Tootsie's, Honky Tonk Central and Kid Rock's Honky Tonk have closed to help protect public health. Rippy's and The Diner will operate under the guidelines set forth for restaurants and take precautions to keep our staff and patrons safe. We hope to continue working with local officials to minimize the hardship this puts on our over 800 staff members and 300+ musicians. Visit us on social media platforms for news and updates."

Sprocket Rocket, one of the largest part bike companies in Nashville, suspended operations for at least two weeks even before the public health emergency declaration. Owner Emmit Martin said he canceled 150 bookings in the next two weeks.

“It’s scary and depressing because our busy season kicked in pretty much this weekend. For 80 to 90 percent of my 45 employees, this is their main source of income,” Martin told NewsChannel 5.

Some of Martin’s employees are already dealing with the aftermath of the tornado almost two weeks ago. While he donated tens of thousands of dollars to relief efforts, Martin said he plans to pay his employees for at least the next few weeks.

However, his main concern is what business will look like down the road.

“Even as we operate again it will still take al one time for people to star traveling again,” Martin said. “Even if the government gets a hold of this thing and stops it, the perception of this is going to last a long time.”

Businesses across town have adapted the new change without any push-back.

“We are fully supportive of Mayor Cooper’s request and have been taking measures over the past several days to implement these very recommendations. It is our utmost priority to keep our staff, our guests, and the public at large safe and healthy. We will continue to adjust our temporary business model as more information becomes available, including to go & delivery options.”

Colin Reed, Chairman and CEO of Ryman Hospitality Properties, also sent a statement after the declaration:

“Nashville has evolved over the last decade to become one of the top entertainment destinations in the world. We have a responsibility to serve as an example for other cities by taking the lead in protecting the public health of our citizens and the tourists who visit here. Our company is fully supportive of Mayor Cooper's actions during this unprecedented time. We have already taken steps to suspend our downtown operations, including Ole Red Nashville, beginning at 7 p.m. tonight. It is our hope that the sooner we all come together to take decisive action on COVID-19, the sooner we will be able to return to business as usual.”

The USBG National Charity Foundation has set up a Bartender Emergency Assistance Program to help service industry workers during this time. You can learn how to apply for help or donate to the cause on their website.