More than $100 million in incentives offered by Nashville, state for Amazon jobs 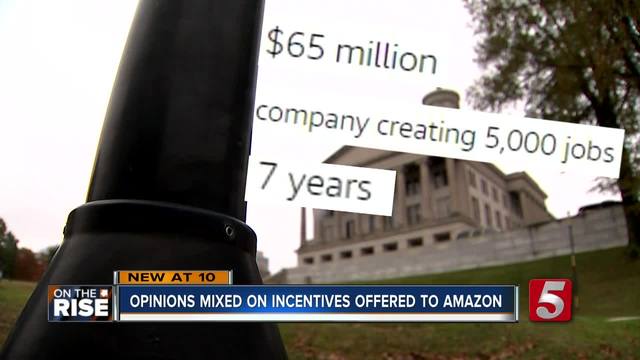 Amazon has announced that 5,000 jobs will be coming to Nashville, but those jobs come with a cost: a combined $101 million in grants offered by the state of Tennessee and the City of Nashville.

Amazon has announced that 5,000 jobs will be coming to Nashville, but those jobs come with a cost: a combined $101 million in grants offered by the state of Tennessee and the City of Nashville.

According to documents shared by Amazon, three grants were offered as a part of this project:

According to these documents, the company is making an estimated $623 million capital investment over seven years and creating 5,000 net new full-time jobs with an average pay of $76.32 an hour, which is more than $150,000 a year.

The Beacon Center of Tennessee, a Nashville think-tank, called the proposed incentives "both unfair and immoral."

"Nashville was passed over for Amazon's second (and third) headquarters, yet city and state officials still got scammed into giving the company more than $100 million in taxpayer giveaways for a consolation prize, which includes $80 million in cash handouts," said Beacon Center spokesman Mark Cunningham.

Specific to the "Job Grant," A letter from Mayor David Briley says the grant will still need to be approved by the Metropolitan Council and the Industrial Development Board. The process will take approximately two months.

The letter also says the investment will have a "significant impact on the community in which it locates," adding "buildings, roads, parks, and greenways will be built."

Metro Council Member Freddie O’Connell, whose district is home to the planned operations center, said he supported the incentive Metro offered because it is strictly tied to jobs.

“It is literally as simple as a $500 dollar per job payment to Amazon,” said Council Member O’Connell.

“They don’t create the jobs, they don’t get the incentive.”

You can read both documents shared by Amazon below: