Maury County farmer sues over the use of Dicamba; trial is set for spring 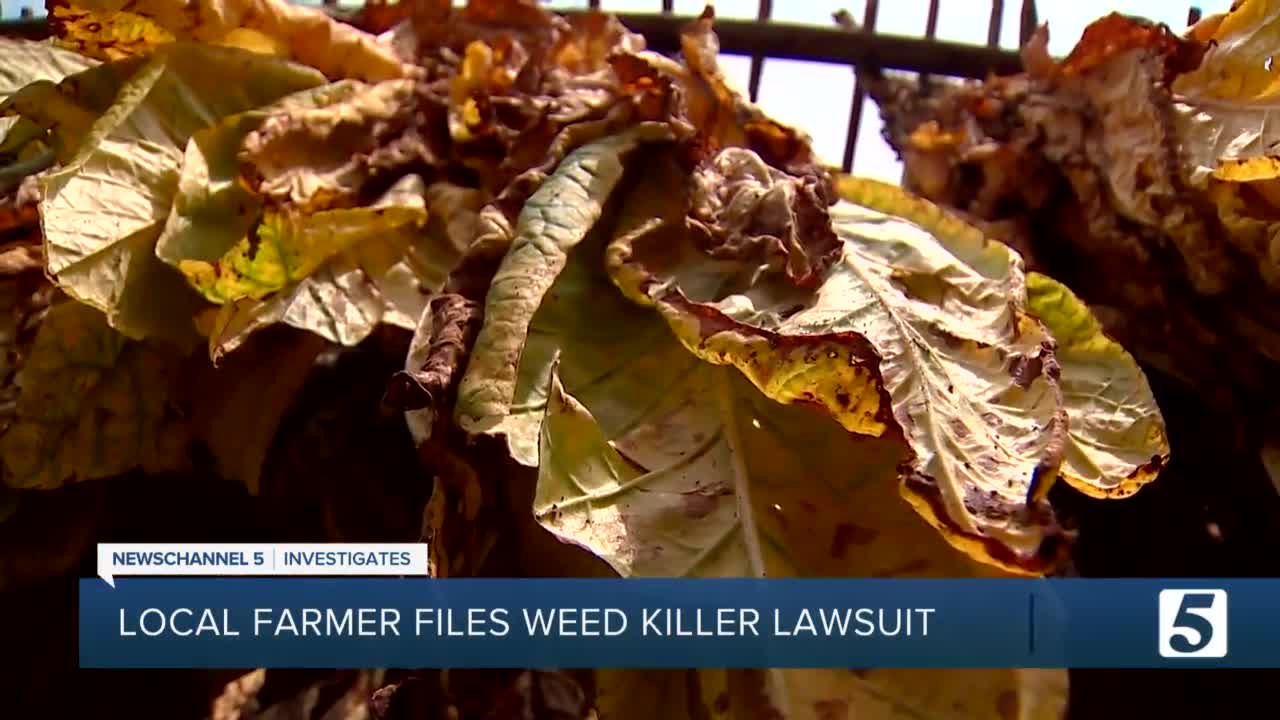 A Maury County farmer claims a controversial weed killer forced him out business. 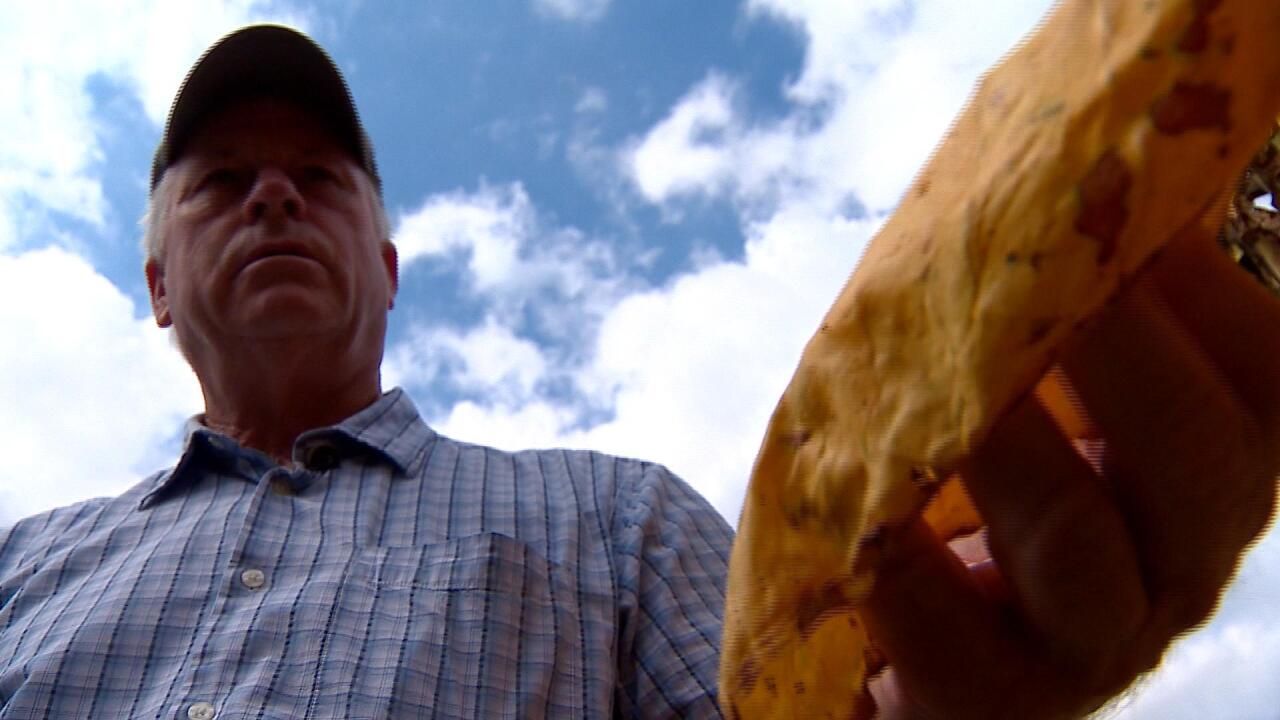 MAURY COUNTY, Tenn. (WTVF) — Maury County farmer Tandy King is one of many farmers across the county who has sued Bayer, the owner of agricultural giant Monsanto, because of a controversial weed killer.

King says the weed killer, which uses Dicamba, drifted off his neighbor's farm and landed on his tobacco plants.

He said after two years of heavy loses, he was forced out of business.

"You don't want to start a new venture at 65-years-old," King said.

But he said he was forced out of business right after we first met him in 2018.

"You want to do what you are comfortable with and something that you know will make money, but I pretty much didn't have any options," King said.

In 2018, King showed us his struggling tobacco crop.

"The leaf is about a third the size it needs to be," King said in 2018, as he held the damaged leaf.

He blamed the stunted growth and cupped leaves on a neighboring farmer for spraying a controversial weed killer.

He said Dicamba drifted off target and landed on his tobacco plants.

"Why would you want to spray a chemical that has the potential to drift over on your neighbor and destroy his crop?" King asked in 2018.

"I could see that Industrial Hemp was maybe a close kin to tobacco," King said earlier this year.

He is now growing hemp.

King had to invest in all new equipment -- including greenhouses, and he's trying to make a living.

"It was hard. I've been in the tobacco business ever since I was 15-years-old," King said.

King is now suing Bayer -- which bought Monsanto -- and is responsible for marketing the weed killer.

"I feel like there's a need for somebody to step up and say, 'hey Monsanto needs to be held responsible for this,'" King said.

King and his attorney, Andie McKeller, closely watched the first major Dicamba case in the United States go to trial earlier this year, before the pandemic.

A Missouri peach farmer claimed Dicamba drifted onto his farm and permanently damaged a thousand acres of peach trees.

"I would follow it on the internet, any publication that I could find that would have something about it," King said.

After the three week trial, jurors awarded the farmer a massive $265 million verdict.

It raised the stakes for all future Dicamba lawsuits.

Bayer immediately appealed, and said the judge should "reverse the jury's verdict" or at least "significantly reduce" the damages.

The judge upheld the verdict but reduced the punitive damages.

"Given COVID, I don't know what's going to happen, but we've got the playbook and we are ready to go," Attorney Andie McKeller said.

After that Missouri trial, Bayer agreed to a $400 million settlement with farmers whose crops were damaged by Dicamba between 2015 and 2020.

But King was not part of that settlement, and his trial is set for this spring.

"The only way that you can hurt a big company is with a big verdict basically," King said.

Bayer sent a statement earlier this year, saying its weed killing products "do not pose any unreasonable risk of off-target movement when used according to label directions."

Bayer has raised the issue of user error -- prompting states like Tennessee to require farmers who use Dicamba to get training -- and requiring them to use hooded sprayers during the hottest months.

The Tennessee Department of Agriculture said those changes have made a difference.

Since then, the numbers have decreased dramatically.

But King believes that is because farmers are now buying seeds specially made by Bayer and Monsanto that are resistant to Dicamba.

"They are literally pitting farmers against farmers," McKeller said.

King believes it's wrong to force farmers to buy a certain type of seed, so their crops will not be damaged by drifting Dicamba.

"All of a sudden you have an outside force come in and basically tell you, 'well you can't do this anymore because this is more important than you," King said.

Bayer sent a statement and praised the EPA for extending its weed killer's registration for another five years and said it's a critical tool for fighting weeds.

Tandy King hopes to have his day in court in April.

Here are statements sent from Bayer, first about the EPA's extension of the registration for its weed killer:

“We welcome the EPA’s science-based review and registration decision providing growers access to this important tool. Growers need options, and we are proud of our role in bringing innovations like XtendiMax herbicide forward to help growers safely and successfully protect their crops from tough-to-control weeds. Growers have been clear how vitally important this tool is for their weed-management programs. The EPA’s strong science-based decision and new measures, including the introduction of VaporGrip® Xtra Agent, will help growers use the product even more successfully. We look forward to working with growers to ensure they are aware of the new XtendiMax herbicide label and prepared for the upcoming season. We take our stewardship responsibility very seriously, and we will continue to enhance our trainings, resources, and other support heading into 2021.”

Regarding the settlement announced in June 2020, here is Bayer’s statement:

“On June 24, 2020, Bayer announced a series of agreements that will substantially resolve major outstanding Monsanto litigation, including the U.S. dicamba litigation involving alleged damage to crops. For the dicamba-related portion of the settlement, we will pay up to a total of $400 million to resolve the multi-district litigation pending in the U.S. District Court for the Eastern District of Missouri and claims for the 2015-2020 crop years.”

From Bayer on the Bader Trial from Missouri:

"The only dicamba drift case to go to trial – Bader Farms – is not included in this resolution. On March 27, 2020, we filed our post-trial motions in the case. In our post-trial motions, we offered numerous reasons why U.S. District Judge Stephen Limbaugh, Jr. should reverse the jury’s verdict or alternatively order a new trial. The most fundamental issue we raised is that the evidence at trial failed to show that our product caused the crop losses. It is well-established law that plaintiffs must prove the defendant manufactured or sold the injury-causing product in order to prove actual causation in a product liability case and the Court should have upheld this requirement during the trial. Our motions also urged the Court to strike in their entirety, or at least significantly reduce, the excessive compensatory and punitive damages awards to comply with both U.S. and Missouri law. Here is Bayer’s statement on the court’s Nov. 25, 2020, ruling on our post-trial motions: “Helping farmers safely and successfully grow healthy crops is what we do, and we have deep empathy for any farmer who experiences crop losses. The court’s decision to reduce the punitive damages award is a step in the right direction, but we continue to believe that the jury’s verdict and damage awards are inconsistent with the evidence and the law, and Bayer plans to file an appeal with the U.S. Court of Appeals for the 8th Circuit.”