Complaint does not specify who might have received money 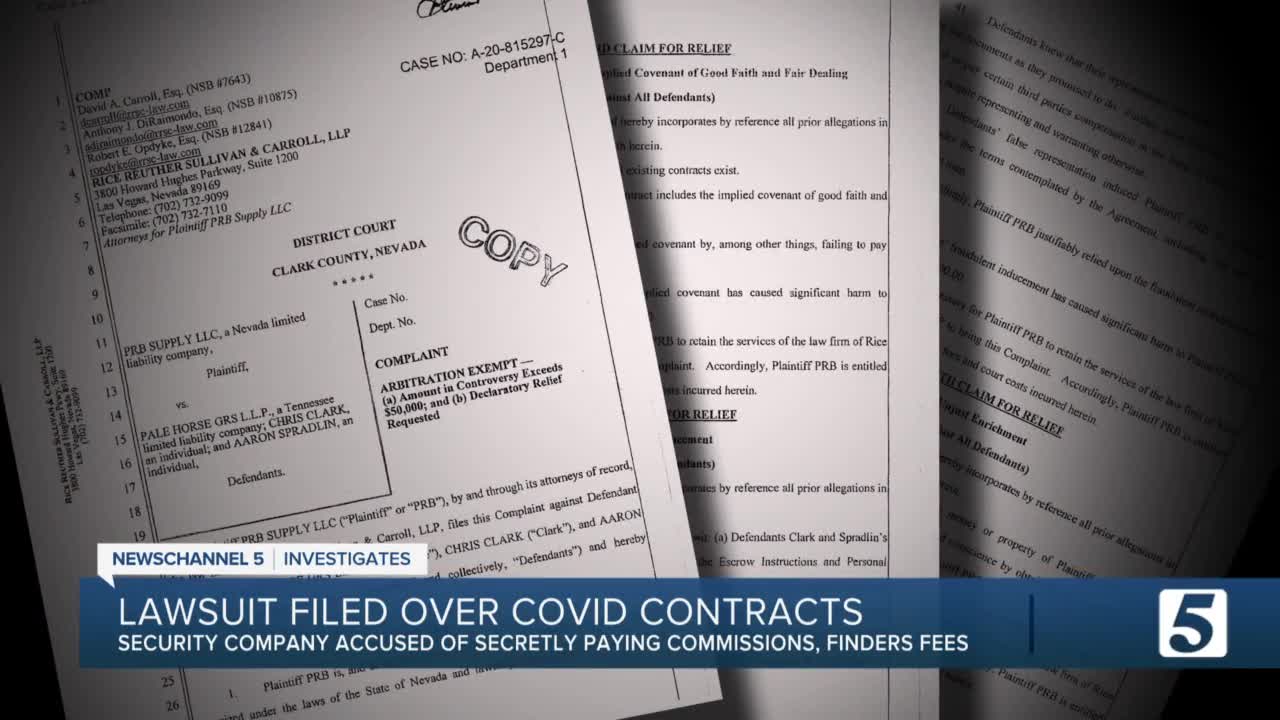 A recent lawsuit alleges that “referral commissions” or “finders fees” were paid by a small security company that got millions of dollars in no-bid contracts as part of the state of Tennessee’s response to the COVID-19 crisis.

NASHVILLE, Tenn. (WTVF) — A recent lawsuit alleges that “referral commissions” or “finders fees” were paid by a small security company that got millions of dollars in no-bid contracts as part of the state of Tennessee’s response to the COVID-19 crisis.

The lawsuit, filed in May by PRB Supply LLC in Las Vegas, claims PRB provided financing to Pale Horse GRS for its deals with the state in return for a cut of the profits. Instead, PRB claims it got ripped off because of side deals made by Pale Horse.

It’s not clear from the lawsuit if those “referral commissions” or “finders fees” allegedly went to people who helped Pale Horse get the contracts or to individuals who put them in touch with suppliers.

The lawsuit does not allege that the commissions or fees were illegal, only that they were not disclosed to the investor.

Pale Horse, in a motion in July to move the lawsuit from state court to federal court, suggested that about $1 million could be in dispute between the two parties.

NewsChannel 5 Investigates reached out to Pale Horse principals Aaron Spradlin and Chris Clark, as well as their attorneys, but received no response regarding the lawsuit.

A NewsChannel 5 investigation this week discovered that Pale Horse GRS, a small security company that lists its business address in a rural part of Hickman County, became one of the biggest players in the Lee administration’s $80 million, no-bid search for personal protective equipment, medical equipment and other COVID-related supplies.

One email showed that, while the state was paying one company 54 cents each for N-95 masks, it paid $2.55 for every mask that Pale Horse was able to deliver.

According to the Tennessee Emergency Management Agency, Pale Horse has been paid $6.8 million so far.

“Pale Horse agreed to pay the principal amount of the loan as well as compensating PRB through payment of a loan premium,” the lawsuit states.

“In exchange for Plaintiff PRB’s performance under the Agreement, Defendant Pale Horse also agreed to compensate PRB in the form of a percentage of net revenue from certain purchase orders payable by the State of Tennessee.”

Aaron Spradlin, Pale Horse’s CEO, told NewsChannel 5 Investigates earlier this year that his company was not motivated by greed when it suddenly decided to get into the PPE business.

"When we started, we vowed that, no matter what, we were going to be the lowest with the best, the best import product coming in because it wasn't about making money," Spradlin said.

"It was about taking care of the people that need it."

Spradlin refused to say who put him in touch with state buyers, but NewsChannel 5 Investigates discovered that the first contact came from Metro Nashville Council member Robert Swope.

Swope, a Republican activist who was Tennessee state chair for the Trump 2016 presidential campaign, described himself in emails as managing partner for Pale Horse GRS.

His personal financial disclosures, required by state law, make no mention of the company.

Swope has not returned calls from NewsChannel 5 Investigates, neither did lawyers for PRB Supply.