In some cases, money went to companies with political connections 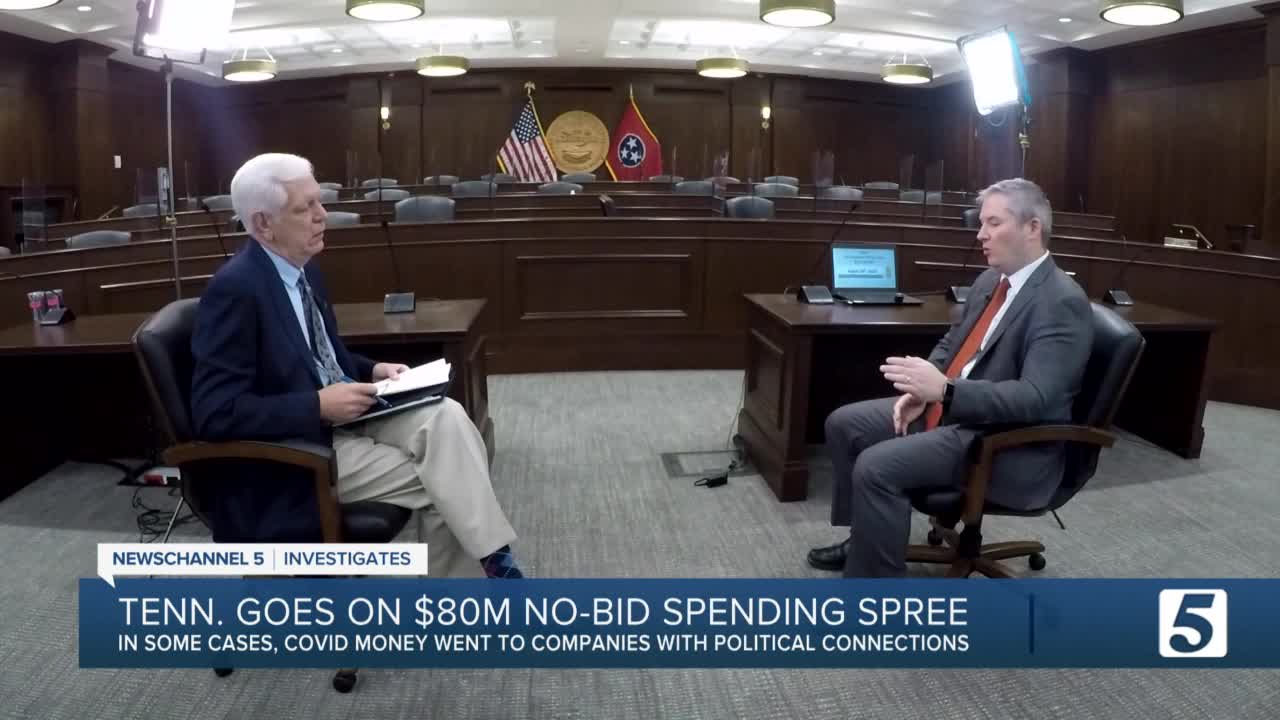 Tennessee Gov. Bill Lee's administration has been on an $80 million, no-bid spending spree for personal protective equipment and medical equipment since the declaration of a state of emergency for COVID-19. 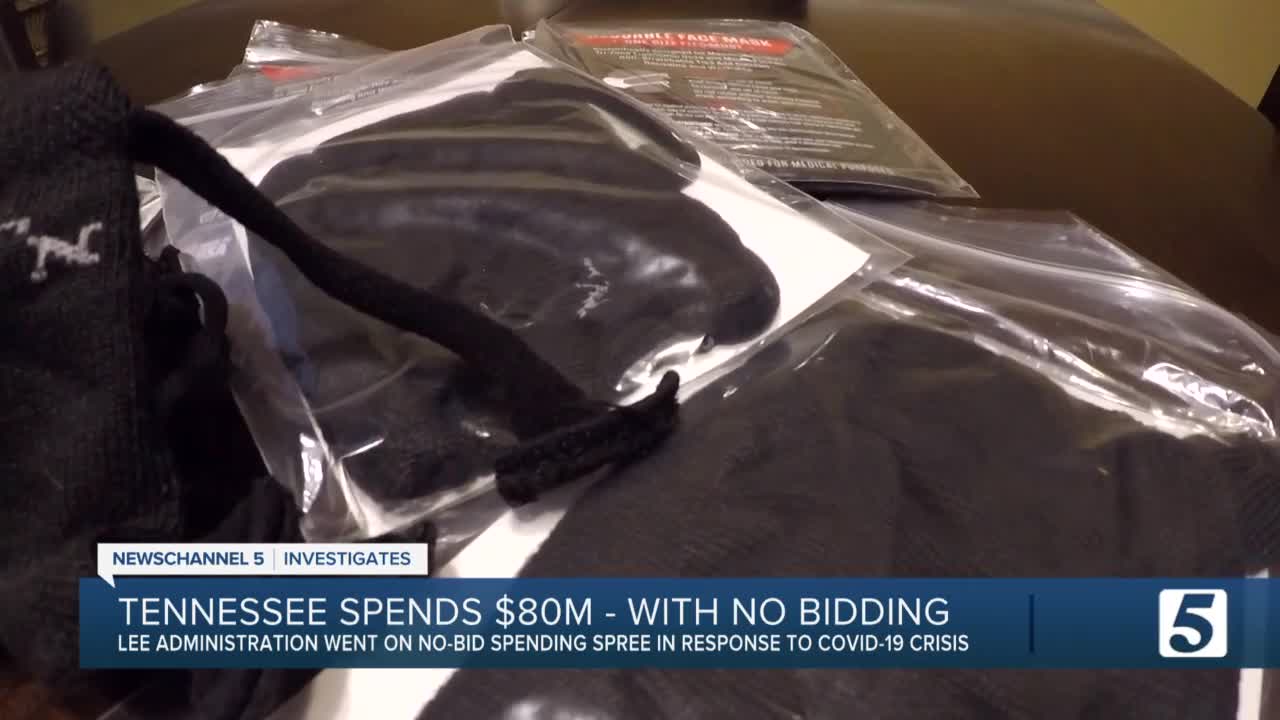 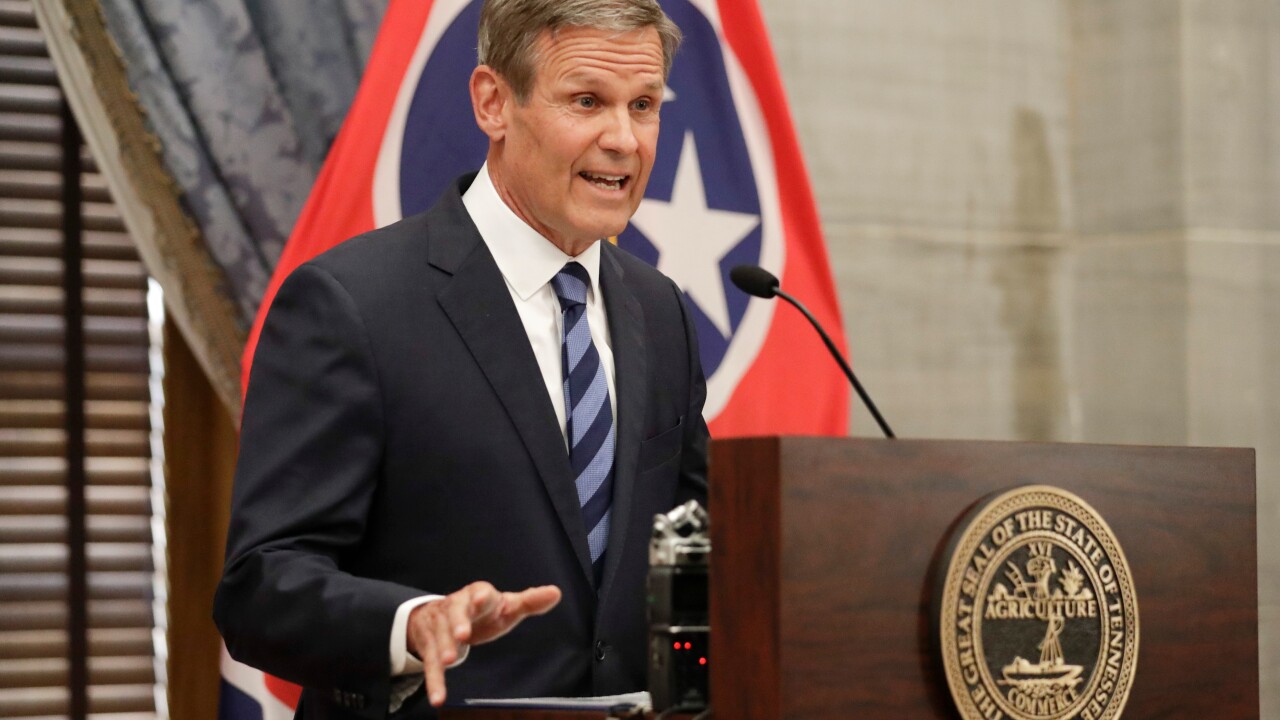 NASHVILLE, Tenn. (WTVF) — Gov. Bill Lee's administration has been on an $80 million, no-bid spending spree for personal protective equipment and other COVID-19 supplies since the declaration of a state of emergency in March, a NewsChannel 5 investigation has discovered.

Operating under emergency purchasing rules for the past six months, the administration has legally skirted normal competitive bidding procedures designed to ensure that taxpayers get the best product for the best price.

NewsChannel 5 Investigates found that, in some cases, those no-bid deals have gone to companies with political connections.

"You don't just throw all the rules and standards out the window just because it's an emergency," argued state Sen. Jeff Yarbro, a Nashville Democrat who sits on the Senate Finance Committee and has pushed for more transparency in how COVID-19 money is spent.

The lead agency on those purchases has been the Tennessee Emergency Management Agency, but nailing down specifics about how TEMA has spent money on PPE and other supplies has proven difficult since the Lee administration has not published a list of all such purchases.

In response to multiple public record requests, the Lee administration provided NewsChannel 5 with one spreadsheet that appeared to show purchases totaling $240 million dollars. But NewsChannel 5 discovered that every item in the spreadsheet had been duplicated.

A second spreadsheet showed apparent purchases of $120 million but, when questioned about specific payments listed there, a TEMA spokesperson said those numbers did not all reflect actual expenditures.

TEMA itself placed the total expenditures at $79.6 million, as of July 20.

Among the most prominent of those no-bid purchases has been the five million face masks that the Lee administration ordered in April from the Renfro Corp., a North Carolina-based sock manufacturer that also has a plant in Cleveland, Tennessee.

Those "sock masks," as they came to be known, were handed out through local health departments and, more recently, in packets sent to Tennessee teachers.

But the Renfro masks have been so unpopular that the owner of Rocket Shirts in Murfreesboro decided to let teachers exchange them for a $5 discount on a cloth face covering more to their liking.

"I wanted to make sure the teachers we love and are serving our children would be protected," Craig said.

"If we look at CDC guidelines, it needs to be a two-ply cotton - minimum - where air cannot pass through."

The Rocket Shirts owner came up with the idea after seeing a demonstration by science educator Bill Nye suggesting that masks would not be effective in stopping the spread of viruses if a person could blow out a candle while wearing one.

At the time of the purchase, the governor defended the no-bid deal.

"We were operating under an emergency procurement process, which means we needed to find someone who was local and could produce them quickly," Lee said.

The sock masks were widely ridiculed on social media. The head of Meharry Medical College, Dr. James Hildreth, concluded: "the mask will not be effective in protecting against viruses."

"Tennessee entered into a no-bid contract with just one company, and I think there's a big question as to why," Sen. Yarbro said.

For months, as the state has continued to distribute the sock masks, NewsChannel 5 Investigates has tried to determine how Renfro got your money, but both the Lee administration and the company have declined to provide any specifics about how the deal occurred.

Sock masks from Renfro appear in @T_E_M_A emails as being "governor's request." pic.twitter.com/8aJDjnVz3J

"That priority was driven by our stated goal at the time to provide millions of free, reusable masks for Tennesseans," Ferguson said.

Yarbro noted, "There's more than one company that can make face masks."

"If we weren't getting the best product for the best price, then I have some serious concerns about how that went down."

The Nashville Democrat said the purchasing procedures utilized by the Lee administration leave the legislature and the public to guess about how that money is being spent.

"We're in the dark," Yarbro said. "We're absolutely in the dark right now."

Another major player in the Lee administration's no-bid spending has been Pale Horse Global Risk Solutions, a small security company that lists its business address in a remote part of Hickman County.

In late March, the state issued a purchase order to Pale Horse for $13.5 million in personal protective equipment.

NewsChannel 5 Investigates asked Pale Horse CEO Aaron Spradlin, "How does a little security company get such a massive amount of contracts from the state?"

"Blessing," Spradlin replied. "That's really the only answer I can give you."

We pressed, "Who was your contact that helped you get these contracts?"

"There was no one, there was no contact that I'm willing to put out there. It was just a person that forwarded us the need," Spradlin answered.

Swope is a long-time Republican activist who served as Tennessee state director for the Trump presidential campaign in 2016.

In emails sent to TEMA, Swope lists himself as managing partner for Pale Horse, although the company does not appear on his financial disclosures filed with the state.

Swope did not return NewsChannel 5's call to discuss his involvement in the deal.

"When we started, we vowed that, no matter what, we were going to be the lowest with the best, the best import product coming in because it wasn't about making money," Spradlin said.

"It was about taking care of the people that need it."

Among the products Pale Horse supplied were N-95 masks.

One email shows, while one vendor was charging just 54 cents for each mask, Pale Horse got paid $2.55.

Emails show @T_E_M_A was paying some vendors as little as 54 cents per N95 mask. Pale Horse GRS got $2.55. Higher price deals appear to have fallen through. pic.twitter.com/GBj16xC7Y6

TEMA had agreed to pay other companies as high as $5.35 per mask, the email suggests, although those deals appear to have fallen through.

Still, experts say, in the Wild West atmosphere of the early pandemic, with states competing against states, prices were all over the place.

"Everyone is willing to cut some slack, that there are conditions and emergencies that require acting quickly," Yarbro said.

In April, Sexton's furniture company cut a deal to make hospital gowns for the state for $165,000. Sexton's price per gown -- $5.50 -- was almost double the price charged by other vendors.

"I don't think it's really appropriate ever to enter into a contract with a state legislator," Yarbro said.

State records show Sexton did deliver the gowns but, after NewsChannel 5 began asking questions, the purchase order was canceled.

TEMA has refused to say why.

Yarbro noted that state law makes it illegal for state officials to bid on state contracts, although various attorney general's opinions have raised questions about whether that statute applies in such cases.

Yarbro said it at least raises some ethical red flags.

"If in the early days of COVID, we weren't paying attention to that basic rule and were planning to pay a legislator, I think it raises significant questions about just the level of oversight into all of these contracts."

TEMA spokesperson Dean Flener noted that "a State of Emergency remains in place in Tennessee."