Briley promises teachers a bigger raise; but where did he suddenly find the extra millions? 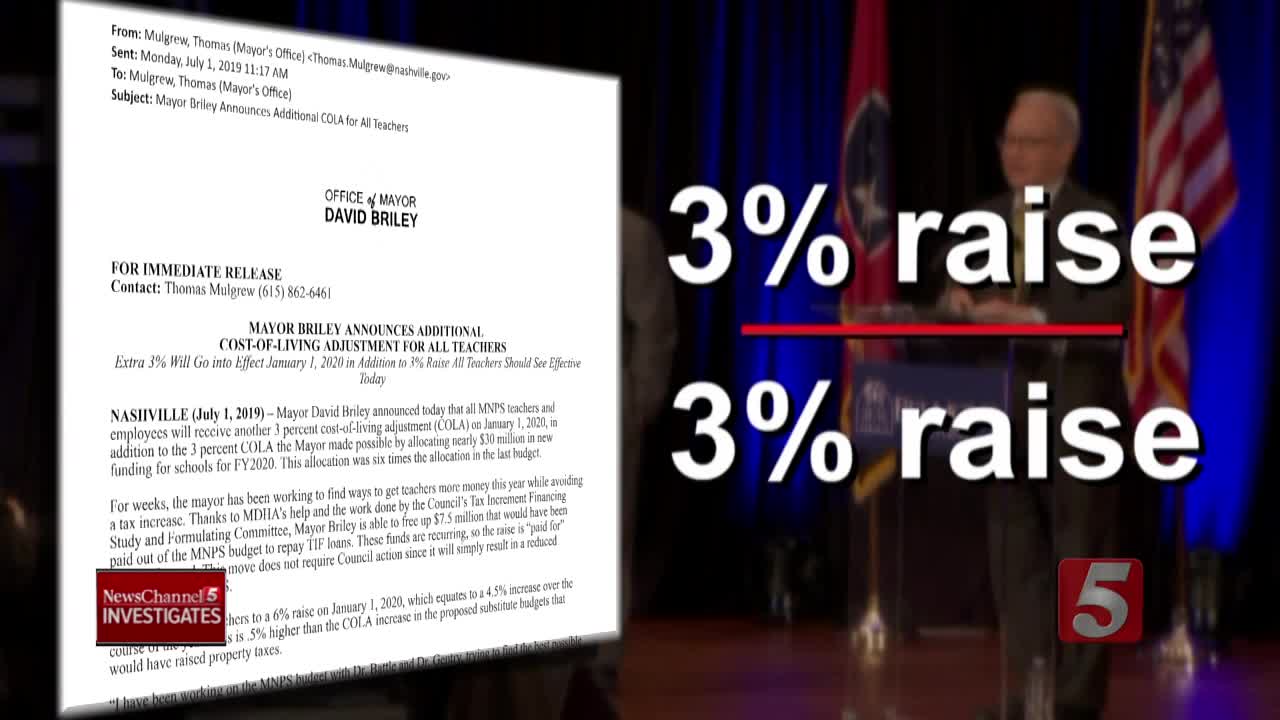 Mayor Briley finds more money for teacher raises, but there are questions about whether his claim the funds are "recurring" are accurate. 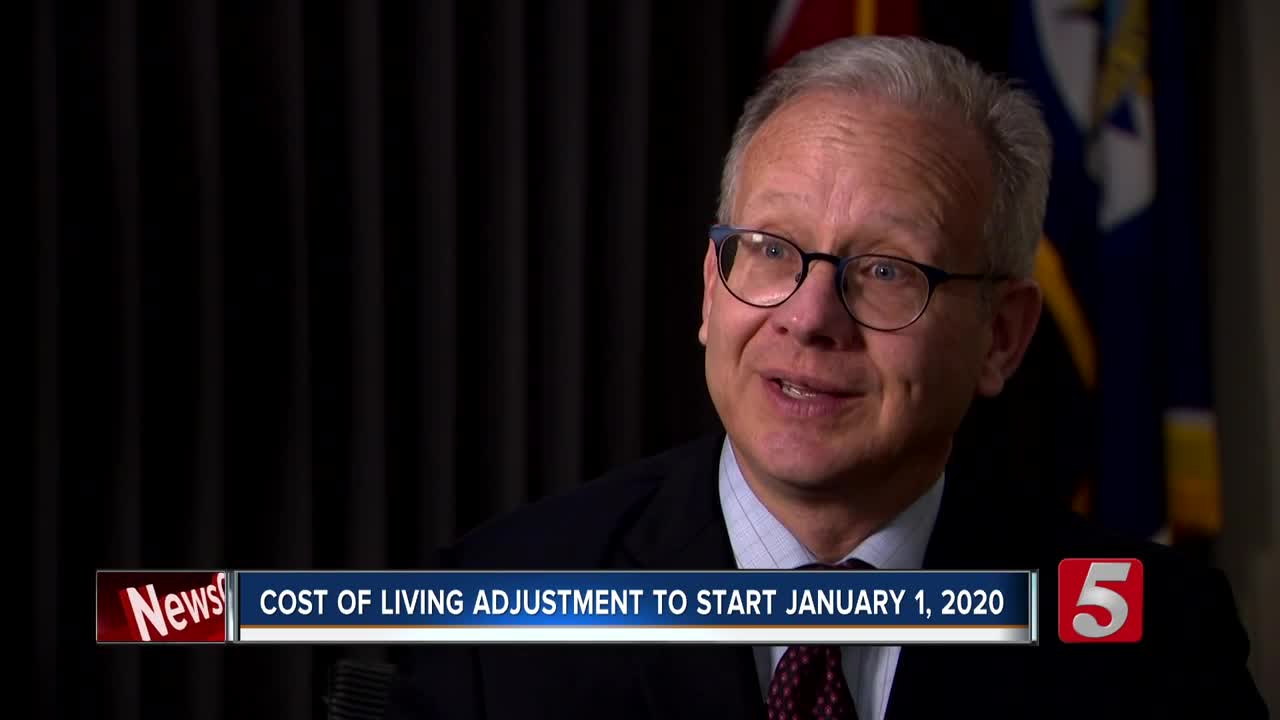 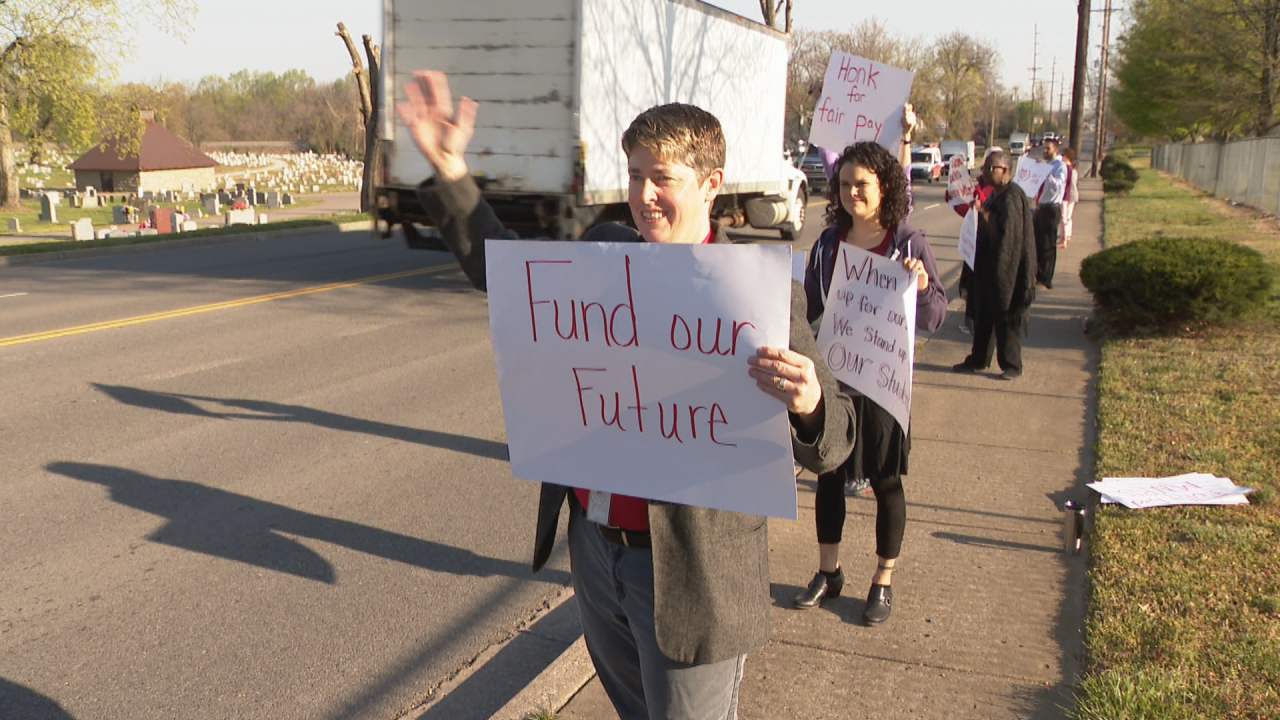 But there are questions about how the mayor found the money and whether his claims that they are "recurring" are accurate.

Councilman-at-Large Bob Mendes led the TIF Study Committee, but Mendes said he was surprised when he saw the news release claiming the Mayor was "freeing up" $7.5 million to pay for the raises.

"It's confusing because it's a press release with no details which is really hard to figure out what is going on a couple days before early voting," Mendes said.

He added, "It's not free. It's not free money. If you are going to find $7.5 million in the couch cushions it's coming out of somewhere."

It turns out the money comes from a favor from Regions Bank - which granted MDHA a one year waiver on TIF loans associated with the Omni Hotel and Country Music Hall of Fame.

Under the terms of those loans, Metro must use all of the property taxes from 18 downtown projects to make the loan payments.

But with the waiver, the bank has agreed to take a minimum payment next year, letting Metro keep the extra money from those buildings.

Mayor Briley said, "This year instead of paying more on the loan, we're just going to take that extra money and use it to pay for teachers and support staff, an additional 3 percent for the last six months of the year."

The Mayor's news release specifically stated the "funds are recurring, so the raise is paid for moving forward."

But MDHA told NewsChannel 5 Investigates that the bank has only agreed to a one year waiver, raising questions about the Mayor's claims.

MDHA said right now there is no set plan to fund the pay raises going forward.

But MDHA said they are bringing in a financial consultant to weigh their options which could include refinancing all current TIF debt.

Mayor Briley's spokesperson said they stand by their statement that the funds for the raises are "recurring," because they are confident that MDHA's financial consultants will be able to find the money going forward.

MDHA's Board will be asked to approve the Regions Bank waiver at its next meeting.

The following statement was released Monday night by the Mayor's Office:

Following the recommendations of the TIF committee, we are taking a close look at all options related TIF loans. After exploring this with MDHA, we found that one loan could yield an opportunity to provide $7.5 million to schools. We are continuing to look in the same way at all TIF loans based on the TIF committee’s thoughtful work. We have to decide each year what makes sense in terms of TIF loan repayment based on the revenue available and the needs of the city. But for now, the Mayor feels it is in the city’s best interest to prioritize teacher pay. There is a clear need there that will take us several years to fully address but it’s important teachers feel we are making a downpayment on our long-term commitment.

The Nashville Fraternal Order of Police released the following statement on the COLA raises, saying in part:

While this is likely welcome news to MNPS employees, it is an absolute insult to every other employee in the Metro Government who desperately needs and deserves an appropriate cost of living adjustment but will not see the additional increase in January. There is absolutely nothing fair and equitable about today's announcement. Rather, this promotes the same environment that has led Nashville's employees, and its taxpayers, to mistrust the day-to-day operations of this city's administrators.

The MNEA released the following statement:

Today, the Metropolitan Nashville Board of Education received a sudden offer of $7.5 million in additional funding from Mayor Briley in the form of an adjustment to $11.2 million previously slated to be diverted from Metro Schools to fund tax increment finance (TIF) debt. While teachers and schools welcome additional funding for our cash-strapped public schools, the method by which this “plan” was developed smells of political intrigue, vote buying, and extortion. Briley’s letter to the board of education intentionally leaves ambiguous the question of whether the $7.5 decrease in TIF funding will extend beyond 2019-2020. Unfortunately, the Briley plan comes with a demand that the board not fund teachers’ step raises but use his approach to adjust salaries. If Mayor Briley truly wanted to help schools, he should have supported the Vercher amendment rather than threaten a veto designed to hamstring the Metro Council. His games unnecessarily exposed certain brave, schoolsupporting council members to unnecessary risk of criticism by voters on the right and forced other council members to betray organized labor and our schools. At the end of the 2017-2018 fiscal year, MNPS was compelled to transfer $3.5 million dollars to MDHA to meet increased TIF obligations to MDHA based on tax collections in excess of budgeted projections. In the 2018-2019 budget TIF transfers were budgeted to increase, but MNPS was not required to pay the complete amount. Today, Mayor Briley admitted TIF loan obligations have been overstated, and there is no need to extract additional tax revenue from our schools in 2019-2020. Nashville’s chronically-underfunded schools deserve deliberate, honest funding streams that do not rely on selling assets or require refinancing schemes that ultimate cost more money to our tax payers. No one should mistake Briley’s newest shell game as a magnanimous gesture to support teachers or schools. See it as vote grab!