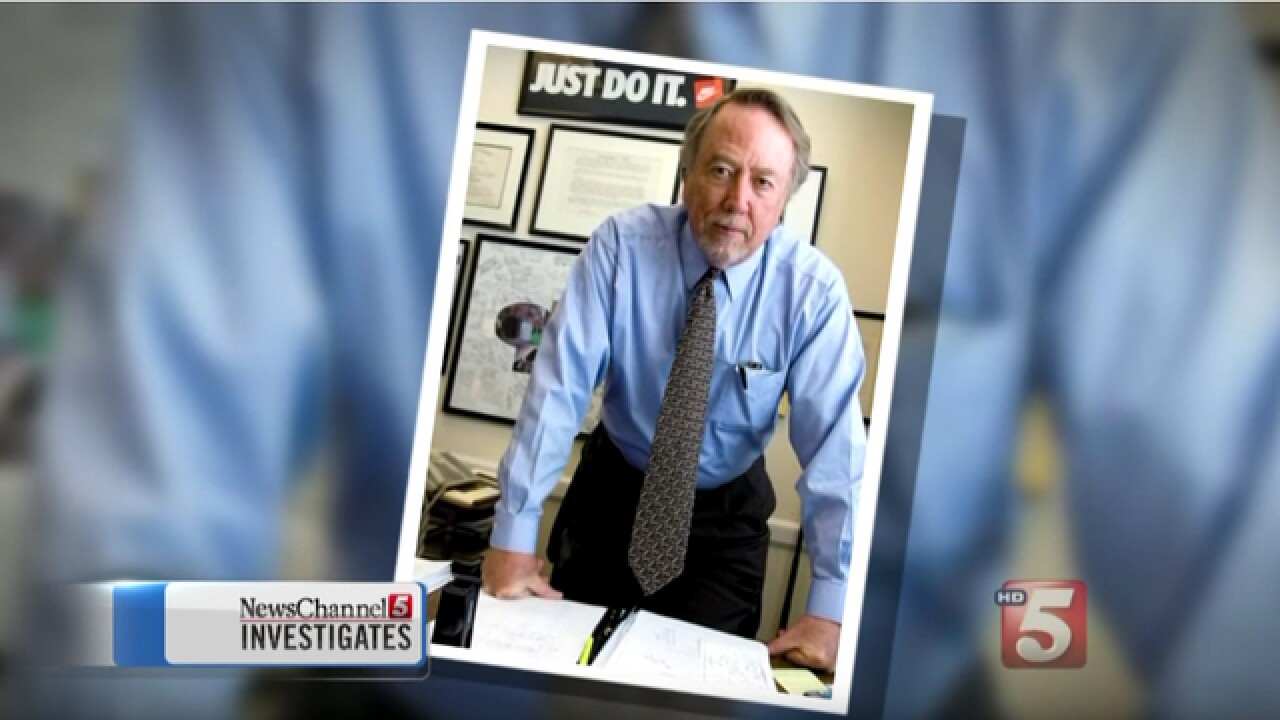 NASHVILLE, Tenn. - State emails, obtained by NewsChannel 5 Investigates, show the high-level access clients got when they hired the governor's own political consultant.

NewsChannel 5 first reported that Ingram is on governor's private payroll.

The new emails still don't reveal how much the governor pays Ingram, but they do shed light on what some of Ingram's clients may be getting when they hire his firm.

For example, when Haslam signed a new law regulating staff leasing companies in May of 2012, two people attending the ceremony caught the eye of The Tennessean newspaper.

Chris and Andrea Ball stood behind the governor and later posted the picture on the website for their company.

But the Tennessean questioned in a June 2012 headline, "Who Invited this Couple?"

The Balls had just been cited by the state for operating a staff leasing company without a license and were labeled in a consent order as "not of good moral character"  for lying to state investigators.

At the time, Haslam aides told reporters it was a mystery who invited the couple to attend the signing of a bill that regulated staff leasing companies.

But emails obtained by NewsChannel 5 Investigates show Haslam's administration was well aware of the couple.

The Balls had hired Ingram.

His firm sent regular updates about the Balls to the governor's chief of staff, Mark Cate.

Haslam responded forcefully in May that Ingram "doesn't lobby me period" and said it was a private matter how much he paid Ingram for political advice.

Yet, emails show while Ingram and his firm may not have contacted the governor about clients, they had enormous access to his top advisers.

In March 2012, Marcille Durham of the Ingram Group sent an email to Cate, "Andrea Ball would very much like to visit with you, however briefly, regarding the Department of Insurance action that is driving her out of business."

Cate responded that he talked with the Department of Insurance Commissioner and is "optimistic we can find a resolution."

In April 2012, Ingram emailed Mark Cate about the Ball's company, "Is there anytime today or tomorrow I can talk again about HR Comp Employee Leasing LLC.  This is a very troubling case."

A month after that, the Balls appeared at the bill signing.

Then in July 2012, Durham complained to Cate about a specific "fraud investigator" with the state.

She was concerned about the "level of  surveillance" on the Balls company.

Cate asked to be "kept in the loop."

The emails show a level of access likely to make other lobbyists envious.

Ingram and his firm communicated regularly with Cate, even when he was on vacation in the Bahamas and on holiday weekends.

The emails also reveal Ingram's firm may have represented more than just one client without properly registering with the state.

In May, Tom Ingram told NewsChannel5 Investigates that his firm had not registered with the state that it lobbied for a coal over a three year period because of an "inadvertent oversight."

The coal company wants to mine on a state wildlife area.

NewsChannel5 Investigates asked, "Did you not want people to know you were representing this company?"

Ingram replied, "Absolutely not. There's no need for us to hide the ball."

But on the day our story aired, May 6, Ingram registered that he and his firm represented Higher Education Partners, LLC.

The company offers online education and other services for community colleges.

Emails from three months earlier in February -- with the subject line "Meeting with Tom Ingram" -- lay out plans for a meeting with two executives from Higher Education Partners and Randy Boyd.

The meeting was scheduled to take place "in the Ingram Group Offices."

State law requires a lobbyist to register within 7 days of being hired to lobby by a client.

The Ingram Group responded to our questions with a letter.  It did not address the question about Higher Education Partners specifically, but said using their influence to set up meetings with government officials "does not constitute lobbying."

Steve Gill, who is the head of Gill Media and a former conservative radio host, said the whole situation looks bad.

"The reason you have these reporting regulations in place is so that everybody will know what side of the game you're playing on," said Gill.

"If Republicans were looking at a Democrat governor doing the same sort of things we've seen with the private, under the table hiring of Tom Ingram, they'd be pitching a hissy fit," Gill said.

Ingram declined our request for an interview or to even speak on the phone.  His firm sent a letter in response to our questions.

In the letter, which we posted on-line, Marcille Durham said the firm did not play any role in "organizing" the bill signing which the Balls attended.

She did not answer our question about whether Ingram or the firm invited the Balls to the bill signing.

As a result, they argued, they don't have to register for all their clients.