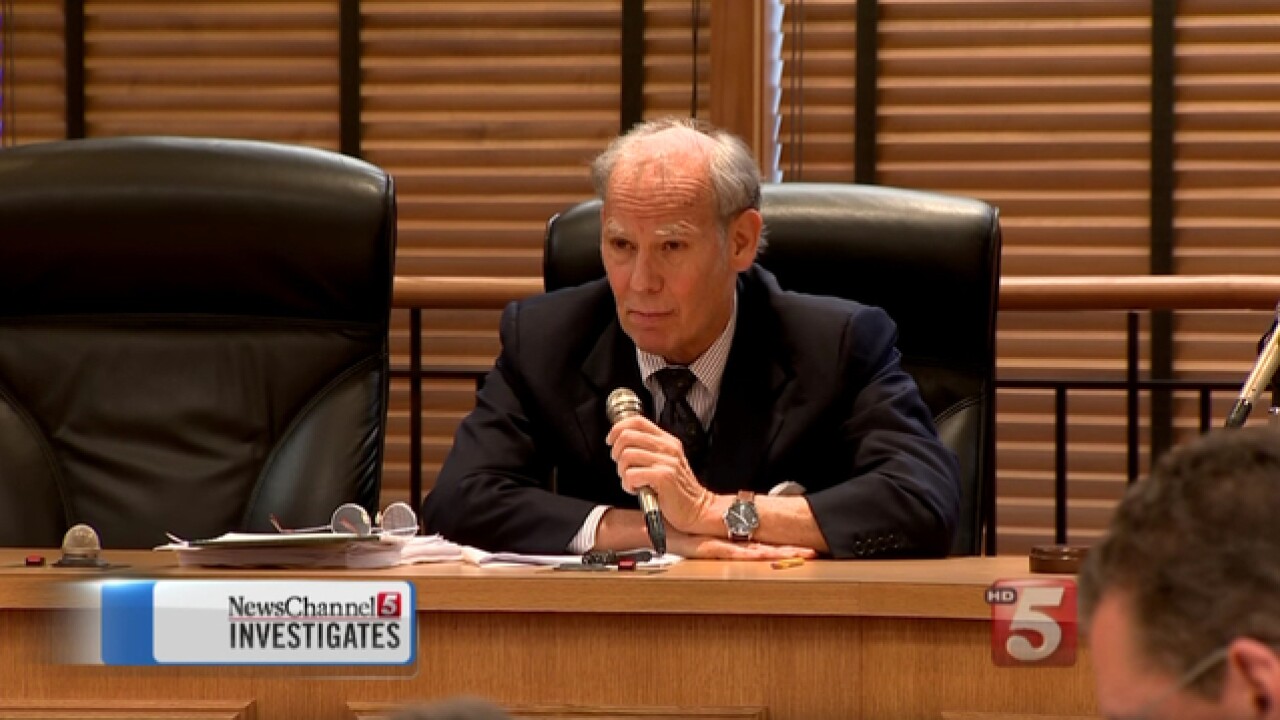 That was the first reaction of Tennessee's top fiscal watchdog last year after he heard how the Haslam administration planned to let a state contractor make millions of dollars in extra cash.

The revealing comments are contained in a batch of emails obtained by NewsChannel 5 Investigates.

Those emails provide a rare insight into one state contract and how the Haslam administration struck a deal to let a big real estate firm take a cut of the state's leasing business. It's the firm that's now been put in charge of all the state's buildings.

As NewsChannel 5 first reported, it was at a dinner in April 2012 at the Governor's Residence that a million-dollar state contract began to grow.

Real estate giant Jones Lang Lasalle had been hired by the Haslam administration to study the condition of the state's buildings, looking for ways to save taxpayers' money.

Three months later, state Comptroller Justin Wilson's staff discovered JLL was negotiating new lease agreements and telling landlords they would be expected to pay an extra 4 percent commission to the firm if they wanted to lease the state a building.

"A commission to JLL at first blush seems very wrong," Wilson emailed his staff. "I am suspicious to say the least."

He was suspicious because, when JLL put in a bid for the state's business, they were asked how much extra they would charge to work on leases.

Notes from contract reviewers in the comptroller's office show that an attorney working for General Services Commissioner Steve Cates "agreed that there was no statute, rule or policy that authorized the commission, nor did the contract authorize it. It was her understanding that, since the Lessor and not the State was paying JLL the commission, it was OK."

Recalling a February 2012 meeting, that attorney told contract reviewers that "everyone ... knew that JLL was going to make their money charging such a commission."

"I responded that we knew that is what they (DGS & JLL) wanted to do, but we thought they understood from the meeting that JLL could only be paid via the service rates proposed in their cost proposal," an unidentified person wrote.

But when the administration brought an amendment to the State Building Commission in November to clarify that JLL would be allowed to charge commissions on new leases, Justin Wilson -- a Republican appointee -- signed off on the deal.

Still, it was that part of the contract that legislative leaders recently suggested should have been handled differently.

"I think again what the lieutenant governor and I are both saying," said House Speaker Beth Harwell, "is perhaps we should have looked at going back in and having that rebid. And we're open to that discussion."

As to what made the comptroller decide it wasn't so wrong after all, now his office won't say.

They won't say because there is now a routine audit underway of the Department of General Services, and a spokesperson for the comptroller said this contract has now been included in that audit.

Still, the emails also point out that the contract amendment approved by the State Building Commission says that JLL can ask for a commission, but that the state will not do anything to force any landlord to pay it.

That's a twist that landlords have never been told.

It's unclear how much JLL stands to make off the lease commissions although it is certainly millions.

In fact, one such lease was just approved for the Department of Human Services in Putnam County. Under its contract, JLL could have taken almost $100,000 commission on just that one lease.

A Department of General Services spokesperson emailed NewsChannel 5, saying: "The commission arrangement in this lease was negotiated between JLL and the Lessor, as is customary in the market.  The State was not involved in any details related to the arrangement."

Critics note that, when landlords have to pay a commission, that probably means they have to charge more for the lease -- which comes out of the pockets of taxpayers.

Other emails detail efforts by Haslam administration officials, beginning in May 2012, to increase JLL's contract initially to $4.5 million. They wanted JLL to supervise a multimillion-dollar effort to modernize state offices (known as Project T3) and to review all capital requests throughout state government.

Comptroller Justin Wilson, in a May 16th email to contract reviewers in his office, noted that the request came from the governor's legal counsel Herb Slatery and chief-of-staff Mark Cate.  Both had participated in that April 2012 dinner with JLL officials at the Governor's Residence.

"They describe it as a continuation of the existing contract that was generally within its scope," Wilson wrote. "I said that it sounded a little like a sole source but that they well have good justification."

In a memo provided to the Comptroller's Office, General Service Commissioner Steve Cates argued that "the benefits of negotiating this amendment outweighs [sic] the benefit to the public that would result if the scope of the services were to be put out for competitive bid."

Cates wrote that JLL would play a critical role in the administration's efforts to reduce the amount of leased space by 1 million square feet. He suggested that putting the work out for bid could trigger a three-month or more delay and "result in lost saving."

"Finally," he added, "JLL has been on contract with the State for most of the past year conducting a comprehensive assessment of the State's space needs and the savings which could be realized through more efficient allocation of office space."

In fact, JLL had been on contract for only two months.

Later, contract reviewers in Wilson's office questioned whether the fact that competitive bidding could take up to six months was, by itself, enough to justify the decision to not put the work up for bids.

"Not a recommended reason to justify non-competitive amendments," contract reviewers noted in the margins of the proposed amendment.

On the other hand, having a contractor who was up on the state's needs "appears to be a reasonable justification due to additional time and added costs to the services being provided since JLL has the relevant knowledge of the assessments and master plan."

They also questioned why an existing state contractor, PB Americas, was not given the work.

General Services lawyers responded in a memo that "because of JLL's involvement in master planning facility assessments, they were the only vendor capable of providing Project T3 Leadership." The memo added that PB Americas was aware of JLL's role and "indicated that they did not object to JLL providing T3 Leadership Services."

A separate email from the governor's legal counsel states that "General Services confirmed a second time that PB Americas agrees the scope is beyond its contract with the State."

Herb Slatery added, "It is also readily apparent that PB Americas could not perform in accordance with the time schedule we are requesting."

On June 14, 2012, the State Building Commission approved the amendment to the JLL contract, while repeatedly noting that they did not want to get into the habit of approving such no-bid contracts.

"If we approve today's extraordinary item, that doesn't construe that that's a new policy on our part," Secretary of State Trey Hargett told General Services officials.

Subsequent amendments increased the maximum value of that first contract to almost $11 million.

Recently, the Department of General Services selected JLL for a separate $330 million contract to manage all of the state's buildings.  Only one other company was allowed to bid.