The emails, obtained through the Tennessee Public Records Act, show that Performance Matters had discussions with Joseph about how to “extend our partnership,” suggesting the company’s contract with Shelby County schools could be a “purchasing vehicle” for Metro Nashville Public Schools.

That process, known as “piggybacking,” allows companies to get government contracts without having to compete with other vendors.

“We may be able to discuss a pilot this year [if] the costs are right!” Joseph said in a follow-up email two weeks after he became director of schools.

As a result of questions raised by NewsChannel 5 Investigates, the district admitted this week that it broke state law in awarding a $1 million, no-bid contract with Performance Matters for a student assessment platorm, piggybacking on a contract with Orange County, Florida, schools.

The district signed a second, $845,000 contract with the company that was piggybacked on the Shelby County contract, although Metro changed the terms. Experts say that also violates state law.

Joseph was hired in mid-May 2016. He formally went to work July 1, although he did visit Nashville for an estimated 10 days to prepare for the job.

In a written statement, Metro Schools suggested that the Performance Matters contracts originated in 2016 after “a transition team made up of local, state and national experts shared that Nashville needed to focus on student achievement – with a sense of urgency.”

Joseph’s transition team did not release its final report until February 2017.

But the emails suggest that Joseph and Performance Matters executive Amy Wieland first talked on June 13, 2016 – a month after he was hired, but two weeks before he formally went to work.

Joseph proposed a discussion about “how we can best support teachers using quality formative assessments and quality unit assessments aligned to Tennessee standards.”

The incoming schools director promised to check to see what Shelby County had done. 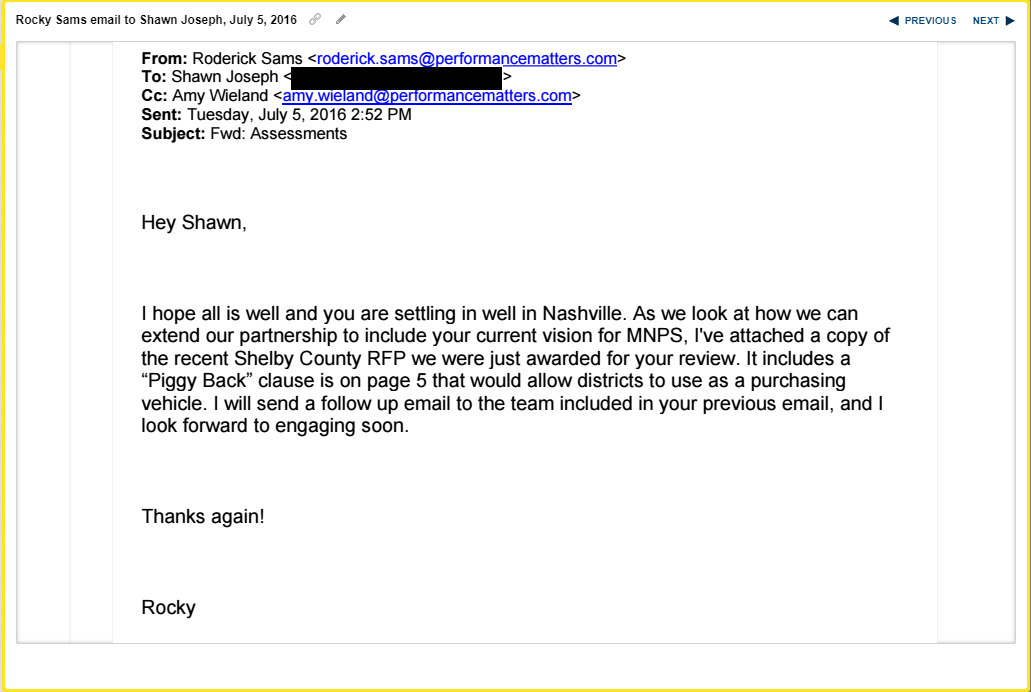 “As we look at how we can extend our partnership to include your current vision for MNPS, I’ve attached a copy of the recent Shelby County RFP we were just awarded for your review,” Sams said in a July 5, 2016, email to Joseph.

“It includes a “piggyback” clause … on page 5 that would allow districts to use as a purchasing vehicle.”

“I need to get my bearings,” the Metro Schools director continued. “We have data systems. I need to look at them and see if there is a need to enhance. If I make changes, it will be next year.”

Talk of a “pilot” project quickly developed into the $1.8 million contracts.

Joseph had previously appeared in a promotional video for Performance Matters, touting how the company’s student assessment software had been utilized in his previous job in Prince George’s County, Maryland. He was also a keynote speaker at the company’s 2014 conference.

In response to NewsChannel 5’s questions, Joseph provided the following explanation of his relationship with Performance Matters:

“I presented at a Performance Matters Conference. The presentation was based upon a chapter in my book, The Principal’s Guide to the First 100 Days of the School Year. Performance Matters reimbursed me for my travel and accommodations for my keynote. They did not assess me a registration fee for the conference. I signed copies of my book at the event.

Related stories:
Metro Schools broke law, misled school board
MNPS spent millions without looking for best price
What did MNPS get for $1 million? Potentially, not much