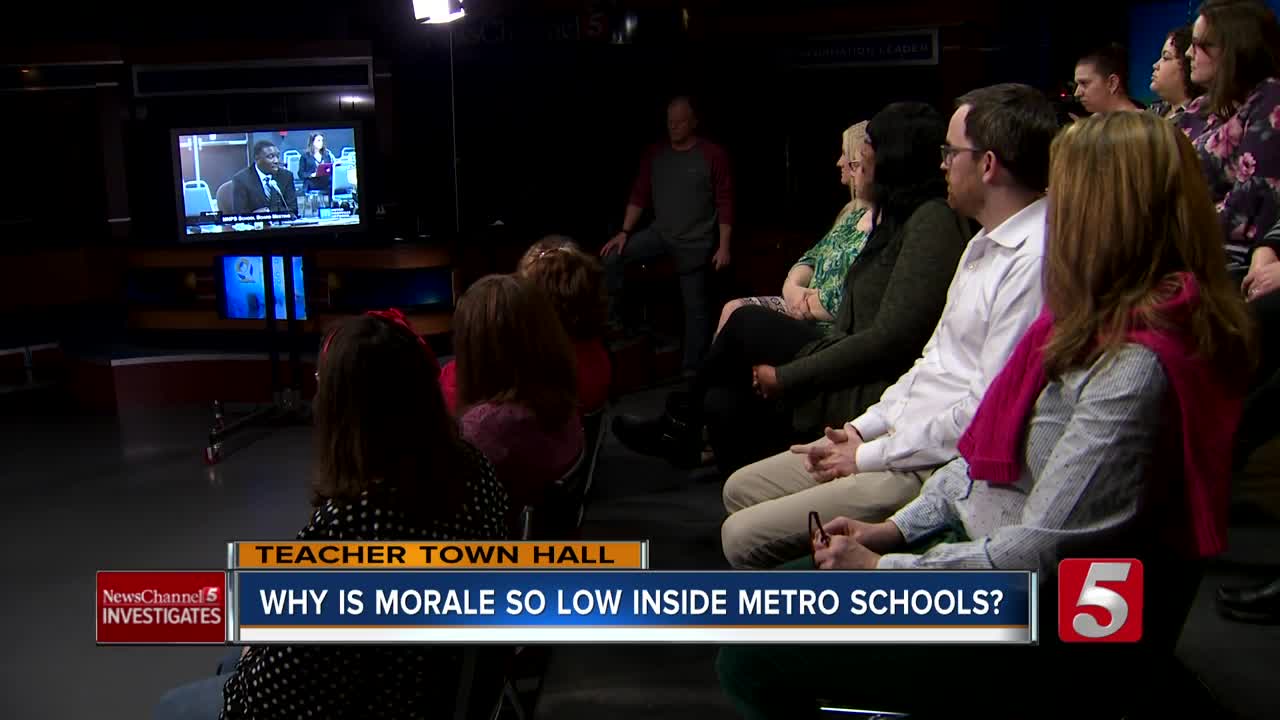 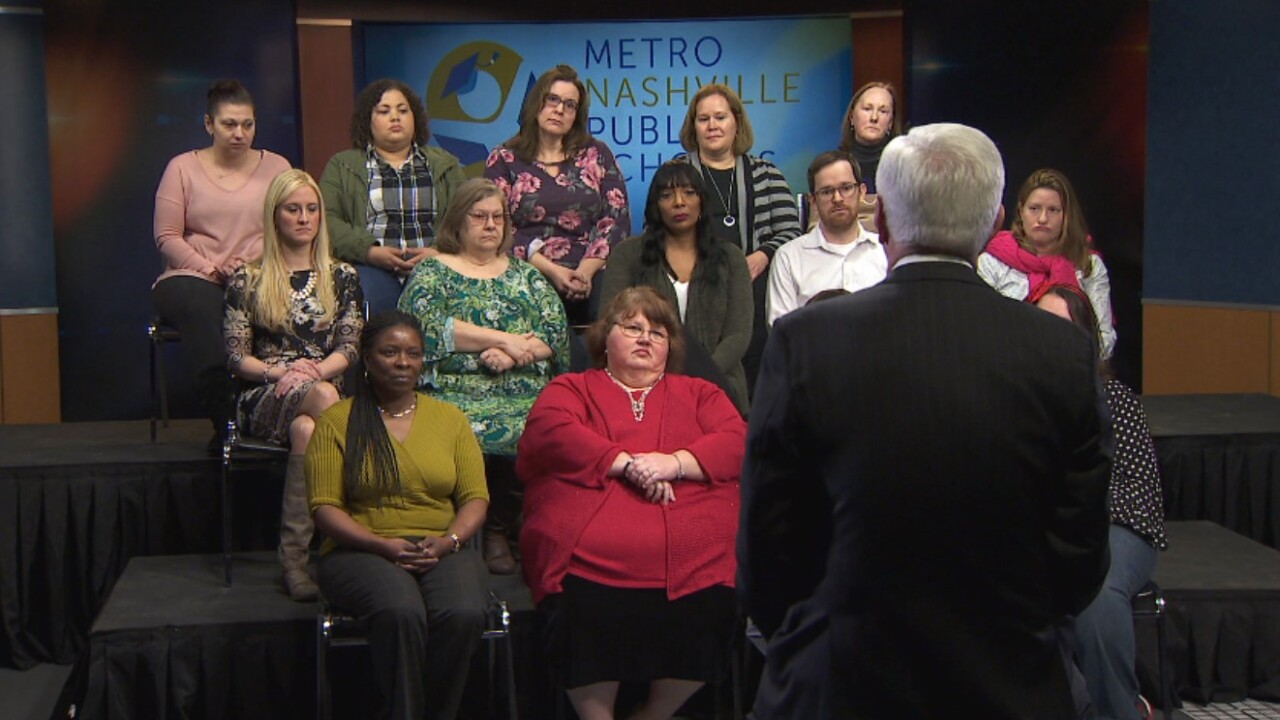 NASHVILLE, Tenn. (WTVF) — With Metro Schools facing what the district’s own experts say is a morale crisis, some Nashville teachers want you to hear why they’re so frustrated.

They say they know they run the risk of retaliation, but they feel you have a right to know what's really happening.

That's why they came together over the weekend -- 14 teachers, representing hundreds of year of combined experience -- to talk about the state of Metro Schools.

Middle school teacher Jayne Riand said, "For me, the morale comes down to feeling like you can never be good enough, you know, just never good enough."

"This is not a secret," Barnes said. "Everybody knows what is happening in the district - and no one is doing anything about it."

While a few became fed up and left the district at some point, the rest said they had considered doing the exact same thing.

NewsChannel 5 Investigates asked, "And you feel like the district is letting them down?"

"I feel, letting kids down," Sposato said. "I don't feel like we get the support that we've asked and begged for on so many levels."

A recent confidential HR report warns that morale is so low it could become "difficult, if not impossible, for the district to retain qualified and exemplary employees."

We asked, "Raise your hands if you think the morale under this administration is about the same as it was before."

Not a hand went up.

Then we asked, "Raise your hands if you think it's worse."

All across the group, hands were raised.

Some of their concerns stem from the district's funding issues.

"I found a paycheck stub. We don't get those anymore, but it was from a couple of years ago," said high school teacher Susan Norwood.

"My paycheck now, there's not even a hundred dollars difference. Prices are going up in Nashville, and I really don't know how we can attract and keep teachers if we don't pay well."

Constance Wade noted that she has first graders "are almost packed in like sardines."

"Because the district cannot provide us another body, another teacher, those children suffer -- and it's because of the money," Wade said.

"We are wasting money on things like consultants, canned curriculum," Leonard said. "That money could be used in the classroom according to the teachers' needs."

Other concerns stem from what they see as unreasonable demands.

"We are expected to be a teacher, a disciplinarian, attendance clerk," said middle school teacher Janita Sanders.

"If you do exceptional ed, you actually teach the students and then you are also their case manager. I mean, there is no way. I work every night and at least one day during the weekend."

Jayne Riand said that Joseph, in a recent training session, told employees they just needed to stop moaning and griping.

"We need to quit moaning and griping about stuff," she recounted. "The way I perceived that is you don't want to hear all the stuff that is really going wrong."

We showed the teachers a clip of Joseph's job interview before the school board in 2016 where he emphasized the necessity of teachers feeling valued.

"You've got to feed your teachers, or they'll eat your children," Joseph said, laughing.

"While I agree with the sentiment that we need resources, his way of expressing it just frustrates me," Holden added. "I think morale is low because of that, things like that."

Janita Sanders said, "At least teachers I talk with, we are walking around on egg shells."

"We don't know who is going to come in and not like what we are doing and call us on the rug in front of whoever is standing there to watch," she added.

Eighth-grade teacher Sonji Collins was one of the people whose complaints about been sexually harassed by her principal, Dr. Sam Braden, were ignored.

She filed a lawsuit and just recently reached a settlement with the district.

"I wouldn't be in the same school building that this abuse took place if I wasn't here for the children," Collins said.

Even though she got a settlement, Collins said that hasn't brought closure.

"Personally, what would have begun that healing process for me would have been a formal apology by the district," she added.

We asked, "And you never got an apology?"

"I never received it," she said. "And not just myself receiving an apology. I felt like they should have given the entire community, my school community, an apology, a formal apology."

NewsChannel 5 Investigates noted that "this administration has yet to acknowledge that there was a sexual harassment problem."

"Under this administration, as a teacher who hasn't had to deal with what she has went through, if I ever did, I wouldn't feel comfortable going to HR and thinking something was going to be done because the ball has been dropped so many times with that department and from this administration," Jones said.

"I don't feel comfortable going forward if something were to happen."

Elementary school teacher Kate Campbell said she wasn't confident of the response either.

"It would either be ignored, or deflected or somehow turned around back on you. I think that is the culture of the school district right now for any issue."

Zack Barnes said, "We spend so much time on the director, as someone said earlier, we are forgetting the kids."

"We really need to focus on the children in this district because they are the ones being harmed right now," Barnes said.

What they want more than anything, these teachers said, is to be heard.

"I think a lot of times it's perceived that we are on a witch hunt against Dr. Joseph to get him out. I don't think that's the true case when it boils down to it," Kate Campbell said.

"We want somebody that will do a good job. If that's Joseph, he turns it around, that's great, we'll happily embrace that. We just want somebody to listen to us and do the things that we ask."