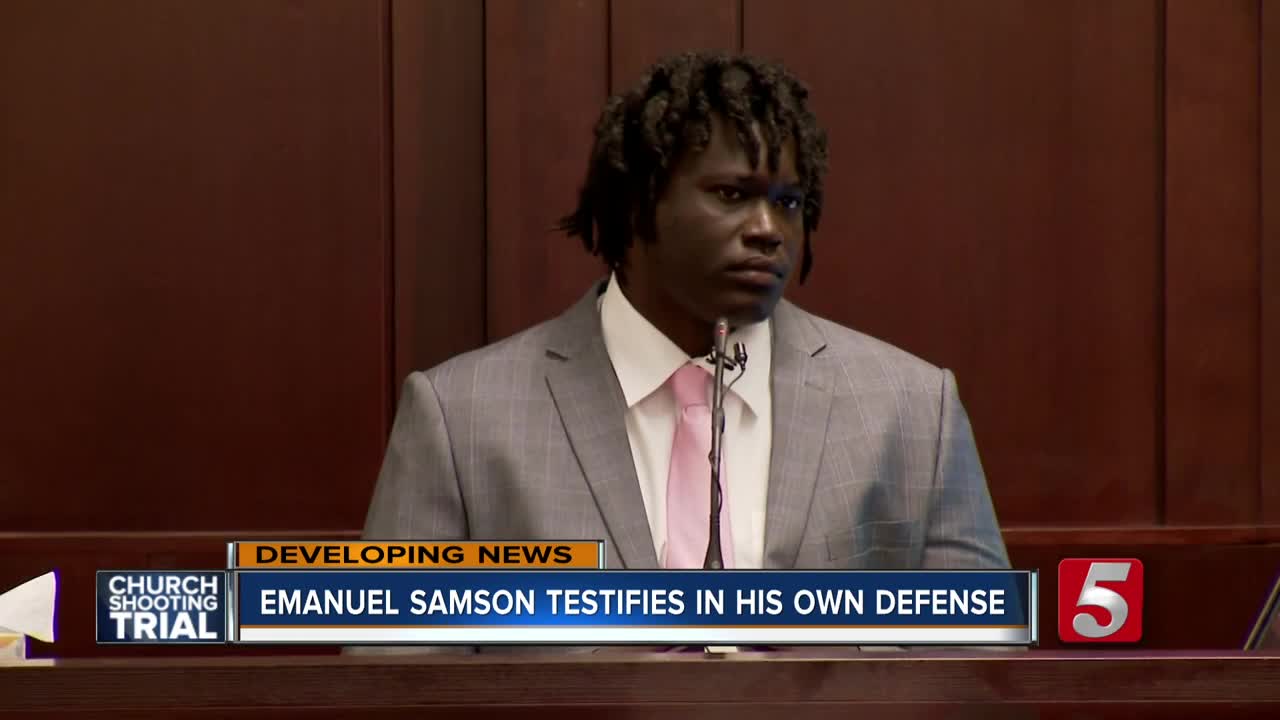 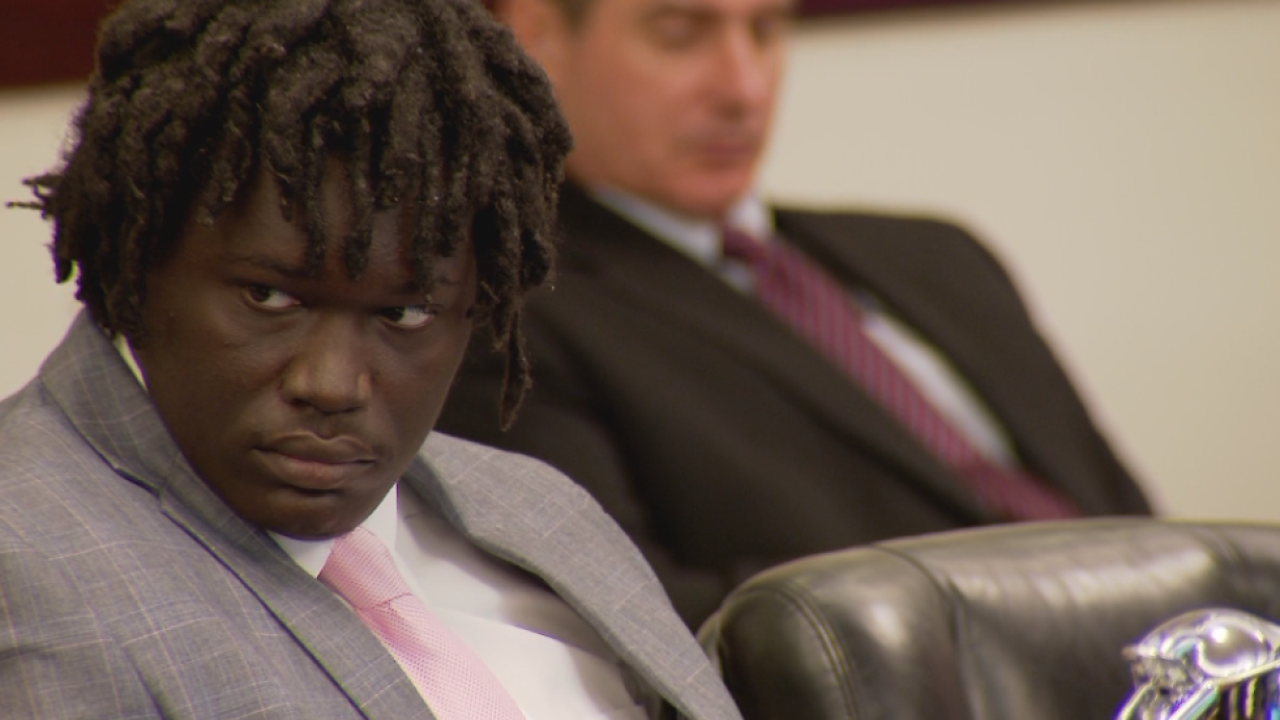 NASHVILLE, Tenn. (WTVF) — The man accused of killing one and injuring others in the Antioch church shooting took the stand Wednesday, testifying that he remembered shooting himself but no one else in the attack from nearly two-years-ago.

Emanuel Samson is accused of killing one and injuring others at the Burnette Chapel Church of Christ in Antioch on September 24, 2017.

Melanie Crow, age 39, was fatally shot in the church parking lot. Several others were injured, including Minister Joey Spann and usher Robert Engle, who was able to subdue the gunman until police arrived.

As day three got underway, church member Minerva Rosa took the stand. Rosa, a nurse, quickly rendered aid to Minister Joey Spann moments after the shooting. She was later honored by the U.S. Dept. of Veteran Affairs.

Rosa was able to call 911 as soon as the gunman walked down the aisle. She said she remembers seeing the culprit in the front shooting to the left while she was on the phone with dispatch.

Once the gunman was unmasked, Rosa said she recognized him as someone she worked with at vacation bible school. In her words, she felt “betrayed.” She identified the gunman as Emanuel Samson in the courtroom.

The state also called Assistant Medical Examiner Dr. Randy Tashjian, who conducted the autopsy and determined that Melanie Crow was shot three times in the torso and once in the face.

Dr. Tashjian used a court officer to show where the bullets entered Crow’s body. One gunshot entered the left side of her back and struck her heart. The second entered her lower back and hit her kidney, rib and liver. The third bullet entered the back of her shoulder.

The fourth bullet grazed her cheek. Tashjian determined her death was a homicide.

The defense chose not to cross examine the medical examiner.

Prior to Tashjian taking the stand, a couple of church members decided to leave the courtroom. Neither Melanie Crow’s sister nor mother were present.

Samson keeps his head down majority of time, occasionally speaking to his attorney. A few church members who testified including Minister Joey Spann, and Robert Caleb Engle and his father have consistently showed up even after their testimony. @NC5

Defense attorney Jennifer Thompson asked for a motion for an acquittal on multiple counts but the judge denied that.

The defense called Samson's father, Vanansio Samson, to the stand and wanted to bring up a history of bipolar and depression through his father but the prosecution objected, arguing that he’s not an expert. At one point, jurors were excused while Judge Cheryl Blackburn conferred with the defense and prosecution.

The elder Samson testified that his son was frustrated about paying for tuition, and would become forgetful and sometimes angry when he was by himself and not around his cousins. He added that Samson stopped taking his medication and at one point took him to a doctor.

Vanansio Samson said he was worried about his son hurting himself. When he received a note that Samson might hurt himself, his father called Murfreesboro police -- adding he wanted police to take away any guns he might have but police told him that they couldn’t.

The elder Samson claimed his son was seeing black or white visions. He asked Samson to pray to keep the demons away by placing a Bible under his pillow -- a practice in Sudan.

However, prosecutors argued that the defense brought up Samson's background in an effort to garner sympathy. The defense is trying to present his mental health history as a defense because they don’t have an expert to testify.

Most drama we’ve seen is between Jennifer Thompson and the judge over what she can or cannot bring up in front of the jury. At one point the judge told her, “quit arguing with me.” Later Thompson said back, “the court cut me off.” It seems like a student being lectured. @NC5

Judge Blackburn allowed Thompson to ask the father questions about his behavior around the time of the shooting, but not about the June incident when he called police about Samson reportedly being suicidal.

Following a break, Maya Hill, the mother of Samson's daughter, took the stand and discussed a note he left her. Hill said she thought it was a suicidal note and began driving around to find him because she was worried she would see him with his “brain blown out.”

Hill read the note out loud in court, which said in part: “I’m terribly sorry for not living up to your expectation my queen, it’s no secret I never deserved you.”

Samson took the stand and told jurors he remembers shooting himself but not anyone else.

"Do you remember shooting Melanie Crow," he was asked.

"I do not," Samson replied.

"I do not," Samson again responded.

Samson also told the jury he didn't remember putting on a mask, tactical vest or writing a note referencing Charleston church shooter, Dylann Roof. He said that in weeks leading up to the shooting, he was having hallucinations and not feeling like himself.

"What I remember thinking and feeling in those days or that day in particular is waking up and wanting to end my life. I was extremely depressed and I felt kind of numb," he said.

Earlier in the week, prosecutors showed jurors a crucial piece of evidence in the case – a note found on the dashboard of Samson's car, which read:

“Dylann Roof is less than nothing, the blood that 10 of your kind will shed is that of the color of the RBG flag (in terms of vengeance). One up b****."

At the end of the sentence was a smiley face.

The prosecution said the note proves his actions were racially motivated.

NewsChannel 5 will have live Gavel-to-Gavel coverage throughout the trial. You can also follow reporter Matthew Torres (@NC5_MTorres) for updates.