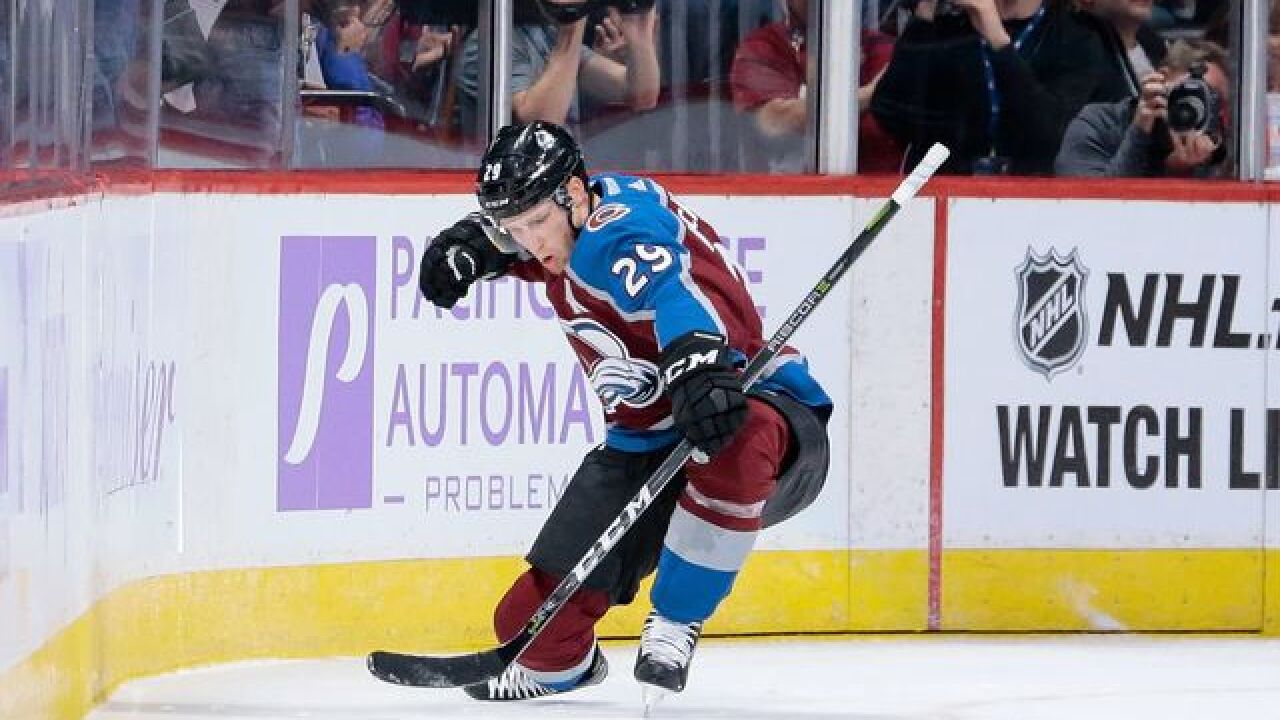 Copyright 2018 Scripps Media, Inc. All rights reserved. This material may not be published, broadcast, rewritten, or redistributed.
&lt;p&gt;Nathan MacKinnon scored two goals for the Avalanche in a 5-3 win over the Predators in game three Monday night. Nashville now leads the first round series 2-1.&lt;/p&gt;

The Predators slow starts in games one and two turned into a disaster in game three as the Avalanche scored three goals in the first period and cruised from there for a 5-3 win, their first victory of this best-of-seven first round series.

Colorado scored on its very first shot attempt in each of the first two games of the series, but with a rocking, gold-clad crowd behind them the Predators were able to overcome their sluggish getaways. They scored five goals in each game and were never really threatened in the third period while building a 2-0 series lead.

They had won 12 straight games against the Avalanche, including five in a row in Denver, entering Monday night's game. But this was the first home playoff game for the Avs in four years and the Pepsi Center was ready, rocking from well before the opening puck drop.

The Avalanche played like a desperate underdog in the first two games of this series, and the Predators knew they would find even another gear with their backs against the wall, wanting to avoid a 3-0 series deficit in front of their home crowd. The Preds promised they knew what was in front of them in Colorado and that they would be ready to match the desperation.

Okay, I guess the first shot didn't go in, but the Avs' second one did. Carl Soderberg shoveling a pass right in front of the net to the stick of Blake Comeau, who beat a helpless Pekka Rinne just 1:50 into the game.

It got worse from there.

Former Predator Gabriel Bourque redirected a Patrik Nemeth shot for his second goal of the series and Nathan MacKinnon converted a breakaway following a turnover to make it 3-0 in the first period.

By the time MacKinnon scored his second goal early in the second period the Avalanche had scored on four of 15 shots and Rinne's night was done, despite much of the mess being out of his control. The Predators were outskated and outexecuted, and this time the lead ballooned. The Avalanche flat out "wanted it more" to start game three.

Nashville knew it was coming, but yet couldn't stop it, and that may be the concerning thing.

This is the President's Trophy champion, the favorite to win the Stanley Cup. But so far in this series something is off.

Maybe they've overlooked the Avalanche, despite speaking daily to the contrary, or maybe it's the weight of the expectations. Perhaps this youthful but talented Avs team is just this good. They've been the faster, better forechecking team for three games now.

It's not time to panic, but it is time to snap out of it. Perhaps a lineup change is in order. Calle Jarnkrok and Yannick Weber have returned to workouts in recent days following injuries. Are they ready to jump back in?

Maybe a third period in which the Predators finally tilted the ice and dominated the offensive zone time will do it. Roman Josi fed Colton Sissons for a goal to cut the score to 4-2, and Austin Watson's third goal of the series made it 5-3 following an empty-net goal for the Avalanche.

The Predators have dominated the third periods in this series, outscoring the Avalanche 7-3, which should come as no surprise considering just how many minutes the top Avs' stars are spending on the ice (MacKinnon is averaging just shy of 25:00 per night in the series). Conventional wisdom would tell you Nashville's depth should be able to wear Colorado down over the course of the series.

But the Predators won't be able to do that if they keep digging themselves a hole at the start of the game.

The Avalanche aren't going away. And this is now a series with game four coming Wednesday night in Denver.

The puck is scheduled to drop at 9:10 p.m. Someone should tell the Predators.