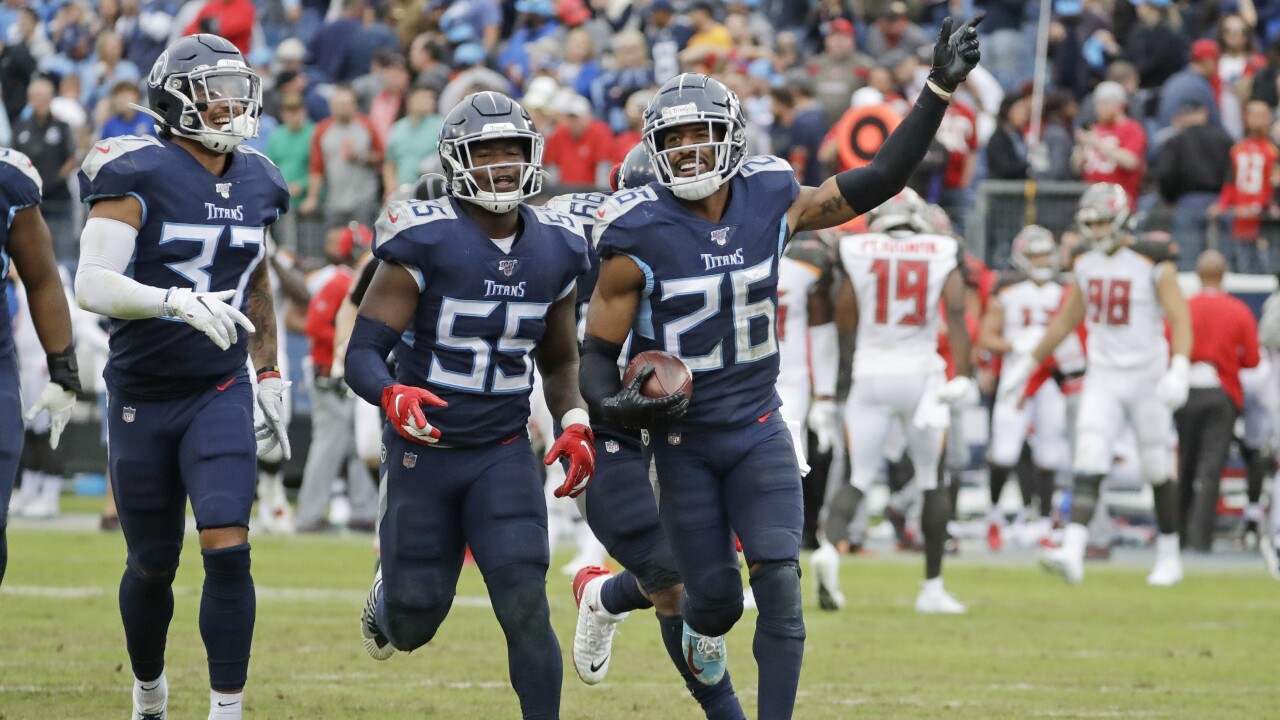 NASHVILLE, Tenn. (WTVF) — It wasn’t easy, because it never is with this group. But this inconsistent bunch of Titans did just enough to beat the Buccaneers 27-23 Sunday at Nissan Stadium to capture consecutive victories for the first time this season.

The win puts the Titans at 4-4 at the midway point of the NFL season, with a trip to Carolina and a game at home against the Chiefs before Mike Vrabel’s team can take a breath and regroup over their bye week for what they hope will be a significant stretch run.

On Sunday the Titans were the benefactor of Jameis Winston’s mistakes. They forced him into two interceptions and recovered to of his fumbles, turning those miscues directly into 14 points.

Isaiah Mack recovered a fumble when an unaware Winston had a shotgun snap go off his facemask. One play later, Ryan Tannehill hit Jonnu Smith for five-yard touchdown. Malcolm Butler’s interception and return moments later set the Titans up for an even shorter drive in which they needed only to gain six yards to find paydirt on a beautiful fade pass to Tajae Sharpe.

That’s 16 total yards gained in two possessions, but it was good enough for a 14-3 lead. It was a good thing because the offense had very little else going for it in the first half. Negative plays and an inability to extend drives once again plaguing this offense that’s struggled to find a rhythm that in can carry over from week to week.

But Tannehill was able to get going in the second half, leading the offense on two extended drives. The first was a 10-play, 68-yard drive that set up a Cody Parkey field goal that pulled the Titans within three. Tannehill then directed a 90-yard drive over 12 plays culminating in an eight-yard touchdown toss to A.J. Brown that gave the Titans the lead.

The defense had it’s own struggles. Tampa Bay receiver Mike Evans had 11 catches on 12 targets for 198 yards and two touchdowns through the first three quarters, but they buckled down to take him out of the game by not allowing him a single reception in the fourth quarter.

And for a second straight week the defense had to win the game with its back against the wall following an uber-aggressive decision by their head coach that backfired. With the Titans holding a four point lead with just under 4:00 to play, Vrabel called a fake field goal that sent All-World punter Brett Kern scampering off the left edge of the line only to get blown up by Devin White short of the line to gain.

The Titans handed the ball over on downs when a field goal would’ve given them a seven point lead. And it could’ve been even worse. Replays showed that Kern fumbled the football on the hit, but since officials blew the play dead on the field the Bucs’ potentially game-winning scoop and score was not allowed to stand.

It’s the latest in a string of mystifying late game strategic decisions by Vrabel, who for the most part has escaped without paying the ultimate price on the field. But how long can you keep playing with fire and expect not to get burned?

The decision did not come back to haunt him Sunday because of a defense that came up with two big plays late. Jurrell Casey blew up a fourth and one run at the Titans 32-yard line with 2:00 left, and Logan Ryan intercepted Winston’s last ditch pass in the final minute to seal the win.

And that’s, ultimately, all that really matters from this game. The Titans found a way to get it done, beating a Bucs team that was coming off of a bye week and had two weeks to prepare for a game it hoped could turn its season around. Instead, the Titans get back to the .500 mark and keep pace in the AFC South, where all four division rivals won on Sunday.

As the calendar flips to November, there are still tons of questions about this Titans team. Can Tannehill get the offense going at a consistent clip? Can Derrick Henry regain his dominant running form from the end of last season? Will the defense hold up to its own almost impossibly high standards for a full 16 games? And will the coaching staff put this team in the best situation to succeed?

All those answers will come over the next two months, but for all the ups and downs of the first eight weeks of the season the Titans remain in the hunt. They have played just well enough to keep this season afloat, but will have to play much, much better to get to where they ultimately want to go.