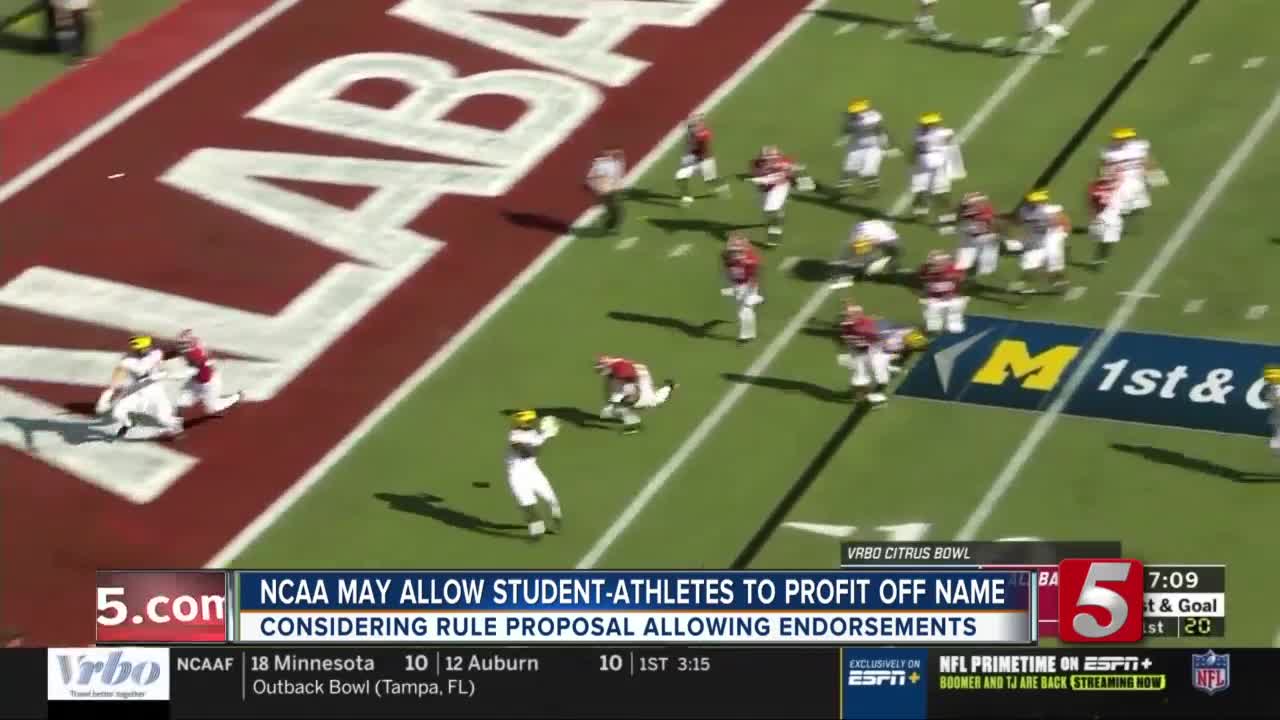 Star college athletes may soon be able to get paid for their talents. On Wednesday the NCAA's Board of Governors gave its support to a proposal that would allow student-athletes to profit off their name, image and likeness.

NASHVILLE, Tenn. (WTVF) — Star college athletes may soon be able to get paid for their talents. On Wednesday the NCAA's Board of Governors gave its support to a proposal that would allow student-athletes to profit off their name, image and likeness.

Earlier in the week the NCAA’s top committee had listened to a recommendation on potential rule changes on the matter from its Legislative Solutions Group, made up of conference commissioners and school administrators. Belmont professor Rich Tiner, the school’s faculty athletics representative, is part of the Division I working group.

“Opportunities (for student-athletes) are way different than they were even 10 years ago,” Tiner said. “It’s an opportunity for (the NCAA) to kind of respond to the change in opportunities.”

The potential rule changes would allow student-athletes to sign endorsement deals, allowing them to do commercials or promote products. It would also allow them to sign autographs for a fee or profit from other work, as long as the schools they attend are not involved in the payments.

“These are student-athletes that we’re talking about, and I emphasize that word student on purpose there,” Tiner said. “We want to maintain that concept of amateurism. There’s not too many people in the intercollegiate world that are interested in any kind of a pay for play sort of system.”

Tiner says there’s no way to know how many student-athletes would be able to benefit from the rule changes, but hopes the overall athletics experience remains similar to how it is now regardless of whether or not an athlete is able to capitalize off their name, image and likeness.

Specific guidelines will have to be established to regulated the recruiting process to ensure a fair process for all membership institutions. Similar checks will have to be created to make sure star athletes won’t receive any preferential treatment from their schools or its boosters once on campus.

“We really would like for this to be, and believe it needs to be, a transparent process,” Tiner said. “To allow the most opportunity for the student-athlete, it needs to be a process that is open so there’s not this sense or fear or concern or suspicion that something’s going on under the table.”

Expect the NCAA’s full membership to vote on the finalized rule changes some time next spring in the hopes of implementing the changes for the 2021-22 school year.

The process is far from over, but Tiner says the Board of Governors took a big step Wednesday towards a positive step for all student-athletes, not just the stars.

“The opportunity to earn some compensation off their name, image and likeness might be made available to more than just that few,” Tiner said. “And I tell you, I think those of us that have been working on this are pretty hopeful that that’s exactly what happens.”