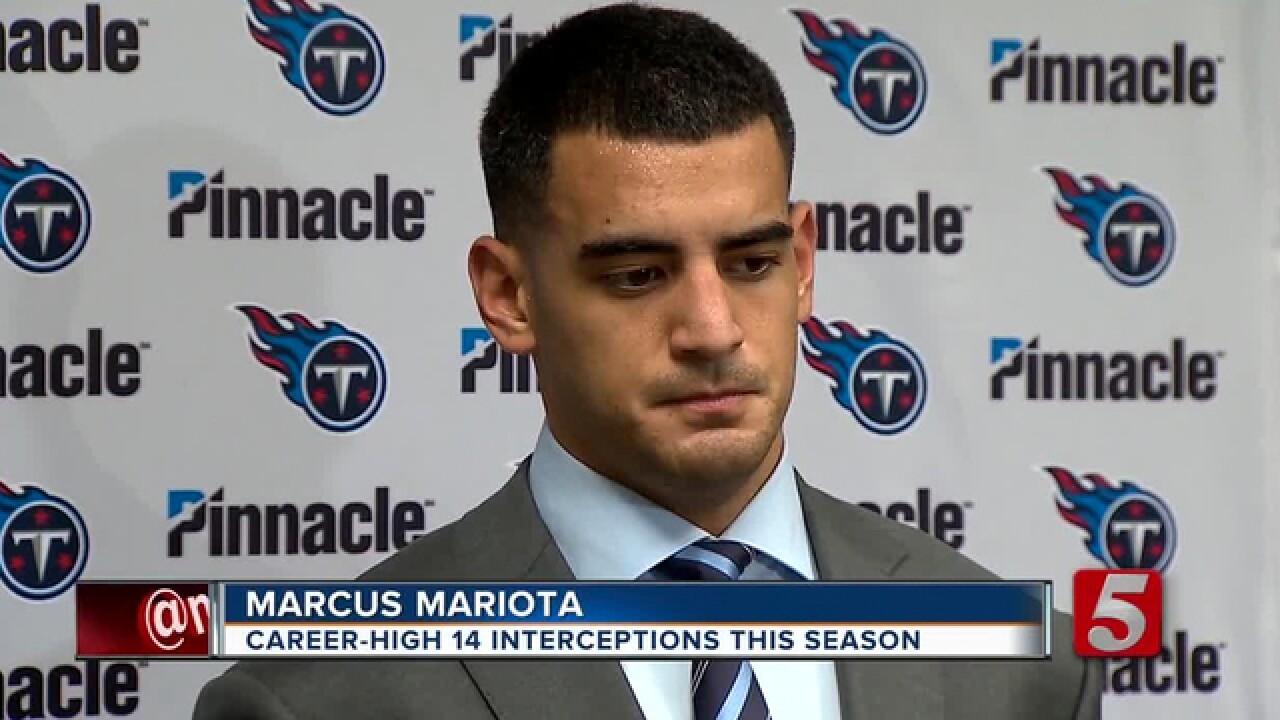 The Tennessee Titans offense is broken, franchise quarterback Marcus Mariota is struggling mightily and now the direction of the franchise is in question following a dismal 12-7 loss in Arizona Sunday.

The Titans failed to score in the second half, managing just three first downs while Mariota tossed two costly interceptions that helped seal their fate in a game where the Tennessee defense didn't allow the Cardinals to reach the end zone all day. It's the second time this season the Titans didn't surrender a touchdown, yet incredibly, they haven't won either of those games in regulation (the other game was a 12-9 overtime win against the Browns).

Tennessee's struggles sit almost completely on the offensive side of the ball, and a big chunk of the blame will fall on Mariota's shoulders. That's just the nature of the position.

The third year quarterback has now thrown a career-high 14 interceptions in just 12 games this season. When his second interception Sunday all but sealed the Titans' fate in a loss that dropped them out of a first place tie in the AFC South, some fans even called for the team to start looking at it's quarterback options.

It's been a stunning regression for one of the league's promising young quarterbacks. A player who set a NFL record with four touchdown passes in his first career game and threw 45 TDs and just 19 interceptions through his first two seasons has thrown for just 10 scores this season. Mariota's yardage totals are also significantly down from last season.

The struggles are obvious, but why?

There are many theories, but the biggest factor in Mariota's poor play to me is his health. Remember, this is the same quarterback that fractured his fibula in week 16 last season. And while his rehab was by all accounts both impressive and successful, it also prevented him from doing the typical offseason work on fundamentals and mechanics that may have helped him take the next step.

Similarly promising Raiders quarterback Derek Carr suffered a nearly identical fibula injury to Mariota on the exact same day last December. Carr, who some thought could be in the MVP discussion this year, has struggled mightily as well and Oakland, a popular pick to win the AFC West, sits at 6-7.

It would be understandable if Mariota and Carr are a bit gun shy coming off such serious injuries. Perhaps they don't fully trust their legs yet. Or maybe it's just a lack of offseason training and work that prevented both guys from finding a rhythm all the way back to their meeting against one another week one in Nashville.

A full offseason should be beneficial as Mariota and Carr look to get back to 100 percent and into the elite group of NFL QB's they were both trending towards when they were injured last season.

More troubling for Mariota is the fact he hasn't been able to stay healthy this season. He pulled a hamstring in the first half of the fourth game of the season, had to miss a game and was hampered by a lack of mobility for about a month. Then Sunday, he suffered a knee sprain when he was hit while attempting to slide on a designed run.

One of Mariota's strengths is his dual threat capabilities, but through three NFL seasons there are real questions about whether or not he can hold up through a 16 game season playing a style of quarterback that exposes him to so many hits. Furthermore, if you have to reign him in, can he be as effective?

Those are questions general manager Jon Robinson and head coach Mike Mularkey probably need to tackle this offseason, but right now Mularkey and his staff need to look at what they can do to take some of the pressure off of a quarterback that doesn't appear to be 100 percent.

Can they finally get what was expected to be a vaunted rushing attack going consistently?  Can they design some shot plays that lead to big gains or scores?

They need to come up with something.

Because the entire Titans offense is struggling and is looking for Mariota to bail them out. And right now, for whatever reason, he doesn't appear healthy enough and able to do so.