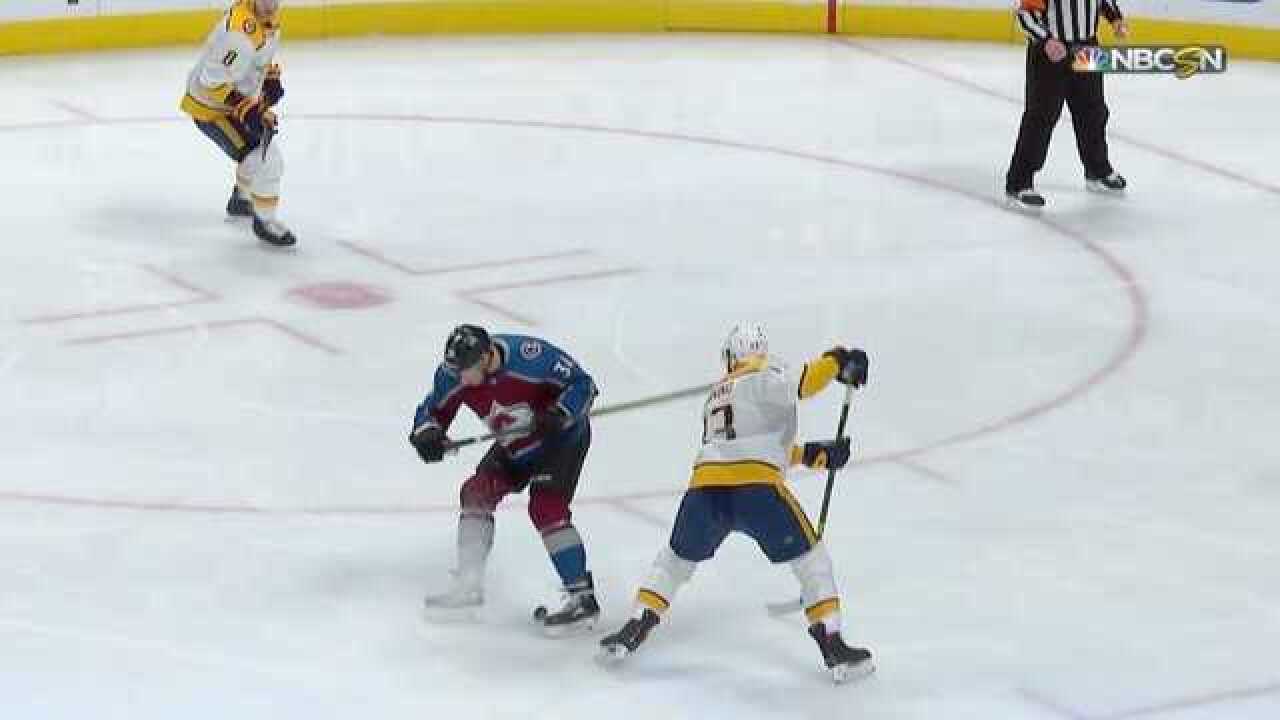 The old saying is that a playoff series doesn’t officially begin until the road team wins a game. Well, the playoffs seemed to officially begin Wednesday night with a spirited effort from the Predators that resulted in a 3-2 win over the Avalanche in game four.

With the win Nashville now leads the best-of-seven first round series and will have a chance to close things out back at home in Smashville Friday night at 8:30 p.m. in game five.

The Predators knew they needed to start fast after struggling in the first three games of the series. They did just that.

Read More: Predators Look To Close Out Round 1 Friday

Two minutes into the game they were on a 5-on-3 power play, and while they didn’t score that aggressive play carried over. The Preds had the first eight shots of the game and outshot the Avs 15-8 in the first period.

Filip Forsberg’s highlight reel goal put them on the board first and gave them their first goal of the first period in this series.

That terrific play continued in the second period. First, the Predators killed off a 5-on-3 attempt for the Avalanche bringing Colorado to 1-16 on the power play in this series at that point.

Shortly after killing the second penalty off, Mattias Ekholm pressed to keep a puck in the attacking zone, Forsberg corralled it and fired a pass to Colton Sissons for a 2-0 lead.

The Preds’ penalty kill came up big once again later in the period when Austin Watson got a stick on a centering pass as an Avalanche power play expired, deflecting it out of the zone to Craig Smith streaking out of the penalty box who fired one past Jonathan Bernier for a 3-0 advantage.

Bernier was replaced in the third period by Andrew Hammond because of a lower body injury, but really that was academic. If the Predators play with the effort they gave in game four the Avalanche has zero answers.

Yes, the Avs continue to fight. A 5-on-3 goal from Gabriel Landeskog early in the third gave them some life, and Alexander Kerfoot scored his second goal of the series with 8:59 left to pull within 3-2.

But Nashville showed its experience down the stretch, salting the game away in the final minutes.

There’s a reason the Predators won the President’s Trophy this season. This is a team with speed and skill that can match up with anyone in the league. And they have playoff experience that showed as they bounced back from arguably their worst performance of the year Monday to take a commanding 3-1 series lead.

And they have the likely Vezina Trophy winner in Pekka Rinne. The 35-year-old goaltender wasn’t great in the first three games of this series. He was even pulled after giving up four goals in just 15 shots in game three. But the popular veteran bounced back in game four, stopping 31 of the 33 shots he faced, including some big saves late in the third period.

It wasn’t easy, but the best road team in the NHL this season did what it had to do to steal one on the road in Colorado. And now they have a chance to advance to round two back in the comforts of home Friday night.

More importantly, the Predators returned to form in game four, and once again looked like the team installed as the Stanley Cup favorites.