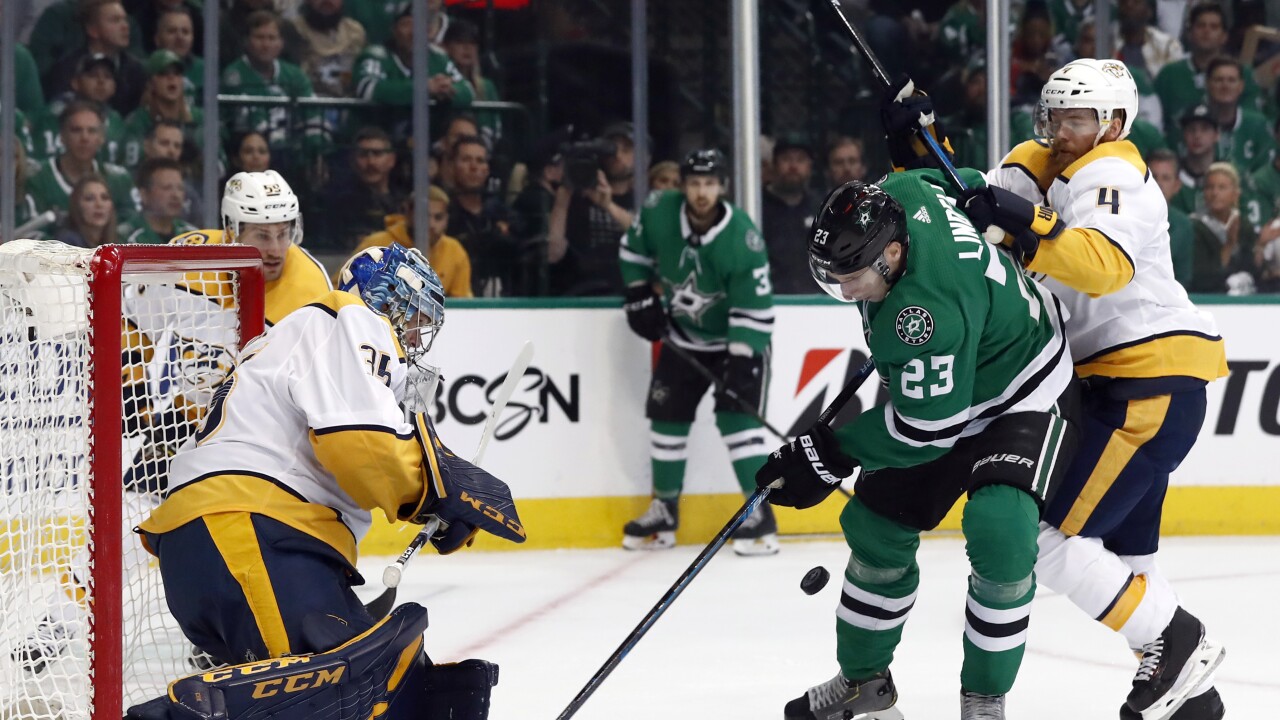 (Copyright 2020 The Associated Press. All rights reserved. This material may not be published, broadcast, rewritten or redistributed.)
Tony Gutierrez/AP
Nashville Predators goaltender Pekka Rinne (35) gets help from defenseman Ryan Ellis (4) while defending the net against pressure from Dallas Stars defenseman Esa Lindell (23) in the first period of Game 3 in an NHL hockey first-round playoff series in Dallas, Monday, April 15, 2019. (AP Photo/Tony Gutierrez)

DALLAS, TX (WTVF) — If the Predators are going to make a run at the Stanley Cup, or even just win this series, they need goaltender Pekka Rinne to play like he did on their run two years ago.

That was the Rinne was saw Monday night in game three when he stopped 40 of the 42 shots the Stars flung at him in a 3-2 Nashville win.

“He was by far our best player,” Predators coach Peter Laviolette said Tuesday. “There were a lot of saves that he made that were pretty good. There were some that were spectacular.”

Rinne came up with the save of the series in the third period with a flailing kick save that turned away the would-be go-ahead goal from Stars captain Jamie Benn.

Minutes later Mikael Granlund scored what proved to be the game-winner, helping the Predators grab a 2-1 series lead.

“That was big,” Rinne said. “It felt good to make that save and then we go to the other end and score a goal. That’s playoff hockey.”

It’s the type of effort the Predators know they’ll need more of from the reigning Vezina Trophy winner if it’s going to be a memorable playoff run.

“You’ve got to win a few of those games in playoffs,” defenseman Dan Hamhuis said. “There will be some games where your team, maybe is not as on as it should be and you need a big performance from your goaltender.”

If Rinne is the first star of the series through three games, the Predators’ penalty kill should be the second star. That unit has stopped Dallas on 12 of its 13 opportunities with the man advantage.

“We’ve had a pretty good run I think,” center Nick Bonino said. “Everyone’s buying in, everyone’s on the same page. We’ve got three good units up front, on the back end they’re taking care of business and obviously our goalie is our best killer.”

The Preds have killed off 10 straight penalties in their back to back wins, including 1:29 of a 5-on-3 during the second period of game three.

“Great teams have got to find ways to make a difference in those moments,” said defenseman P.K. Subban after Monday’s win. “It was unfortunate obviously to go down two guys, but we found a way to get it done.”

Since March 1st the Predators have been perhaps the best team in the NHL with one of their own players in the penalty box. They’ve killed off more than 90 percent of the penalties against them in that time.

GOOD, BUT NOT GOOD ENOUGH

With a 2-1 lead the Predators can grab control of the series with a third straight win Wednesday in game four. But they know that in order to do that they’ll have to bring a better effort than what we saw in game three.

The Preds stole a victory Monday night, thanks largely to Rinne, despite giving up a whopping 42 shots on goal and playing in their heels much of the night. They need to match the Stars’ physicality and desperation or else this series will likely head back to Smashville tied 2-2.

“It’s the most important thing to win games, obviously,” captain Roman Josi said. “(Game three was big), but there’s a lot of things we can learn. They had way too many chances in front of Pekks so we’ve got to defend better.”

On the other side the Stars remain confident in their game despite now trailing in the series. The effort has been there, and so too, according to coach Jim Montgomery, has been the execution.

“I think we’ve been the better team two of three games,” Montgomery said. “Keep playing like that and usually the hockey Gods get back on your side.”

If there’s another takeaway from game three it’s that you can’t give Filip Forsberg any space.

The Stars had shut down the Preds’ top playmaker through the first two games of the series, limiting him to just two shots in game two. But in game three Forsberg found a little room, took a Bonino flop pass out of mid-air on his stick and skated in to beat Ben Bishop for a goal.

It was the first point for Forsberg and the team’s top line in the series. But the Predators hope it’s a sign of things to come.