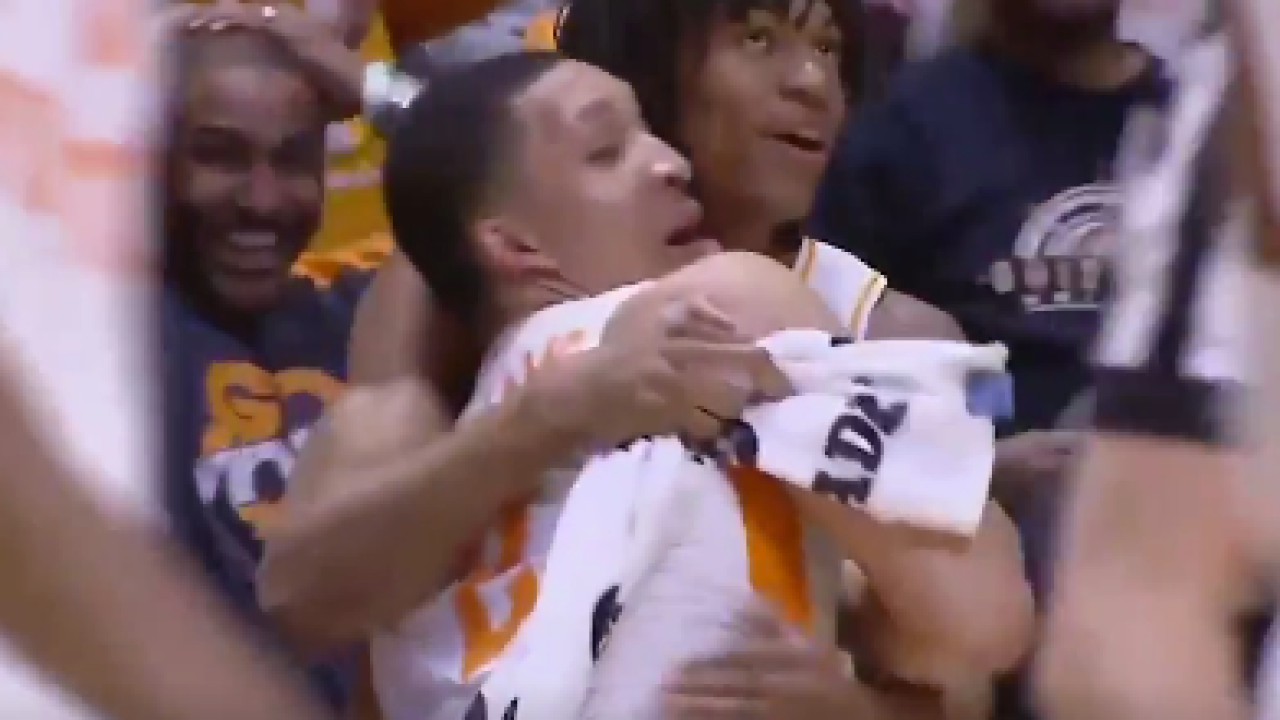 NASHVILLE, Tenn. (WTVF) — The SEC Tournament dream semifinal is set. It’s what the thousands of fans dressed in Kentucky blue and Tennessee orange flocked to downtown Nashville this weekend to see and it’s what the Wildcats and Volunteers delivered with quarterfinal wins on Friday.

Kentucky jumped all over 10th-seeded Alabama early, jumping to a 15 point lead 10 minutes into the game. There was nothing too special after that, but the Wildcats didn’t need it while cruising to a 73-55 win in front of a roaring sellout crowd.

It didn’t get any quieter when Tennessee then took the floor for the nightcap. And while the Vols struggled to put gain much separation from no. 6 Mississippi State for about 28 minutes, they used a vintage spurt to put the game out of reach en route to a 83-76 win.

Kyle Alexander had a tip in as Tennessee dominated on the glass. Admiral Schofield got a bucket, Jordan Bowden hit an in rhythm jumper and then Schofield delivered perhaps the highlight of the season, posterizing Robert Woodard who tried to take a charge as Schofield drove the lane for a thundering, one-handed jam and the foul.

By the time Schofield hit a three from the corner a couple minutes later, the Vols were on a 16-5 run and the lead had stretched to 65-51.

Schofield finished with a team-high 20 to lead the way, but the Vols got contributions from all over. Grant Williams, Alexander, Bowden and Jordan Bone also scored in double figures, while Alexander brought down nine rebounds, to go along with his 16 points, as Tennessee outrebounded Mississippi State 40-35.

Bone chipped in nine assists as Rick Barnes’ veteran team dished assists on 21 of their 34 made baskets in an offensive performance reminiscent of the team that won 19 straight games at one point this season while reaching no. 1 in the nation.

Kentucky got 20 from freshman Tyler Herro, a double-double from all-SEC big man P.J. Washington and, most importantly, got grad transfer big man Reid Travis back in the lineup. That’ll be key Saturday against a Vols team that made the Wildcats pay without Travis two weeks ago in Knoxville.

But the Vols also had 20,000 fans screaming their support that day on Rocky Top. It will be a neutral environment Saturday at Bridgestone Arena. Or at least as neutral as any SEC Tournament game involving Kentucky can be with Tennessee bringing its own large contingent of fans to cheer on a team looking to make history with its first SEC Tournament title since 1979.

Those chances increased even before Kentucky or Tennessee hit the floor in Nashville when regular season champ LSU was sent packing when Florida’s Andrew Nembhard hit a three with one second left in the day’s first game, giving the Gators a 76-73 upset win that will all but seal their bid to the NCAA Tournament.

But with the Tigers gone all eyes are now on the Wildcats and Vols, who will meet for the rubber match in their season series some time around 2:30 Saturday afternoon.

The winner grabs bragging rights and likely will get a no. 1 seed in the NCAA Tournament. And will have the opportunity to cut down the nets as SEC champions here on Sunday.