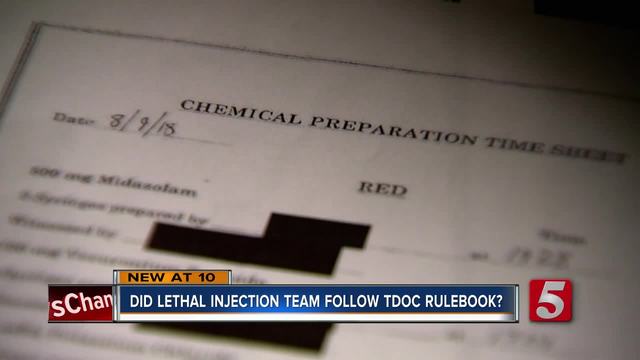 Did the Tennessee Department of Correction have a backup plan ready in case things went wrong during the execution of a death row inmate last month? Attorneys for 32 other death row inmates say no, they  did not.

It's the latest move to stop the state from using lethal injection to carry out the death penalty, as another condemned inmate is set to be put to death in less than a month.

The latest claim from attorneys representing 33 death row inmates is that Tennessee Department of Correction officials didn't follow their own rule book during the execution of Billy Ray Irick last month when it did not completely prepare a backup set of lethal chemicals.

The attorneys made the argument based on a filled out "Chemical Preparation Timesheet" it received from the TDOC after filing a Freedom of Information Act request.  On the sheet, while spaces next to the other lethal chemical names listed the times of day the corresponding syringes were filled, a space next to one of the chemicals in the backup lethal chemical set was filled with "not used."

Attorneys for the death row inmates argue, had something gone wrong with the first chemical they used -- Midazolam -- prison officials wouldn't have had a backup set of Midazolam ready to go, to use instead.

NewsChannel 5 asked the Tennessee Department of Correction for their response to the allegations in the lawsuit.  They replied, "It would be improper for the department to comment on the new legal filing due to the ongoing litigation."