Charges have been dismissed against a Nashville man who spent nearly seven years in prison for a crime he'd insisted he did not commit. 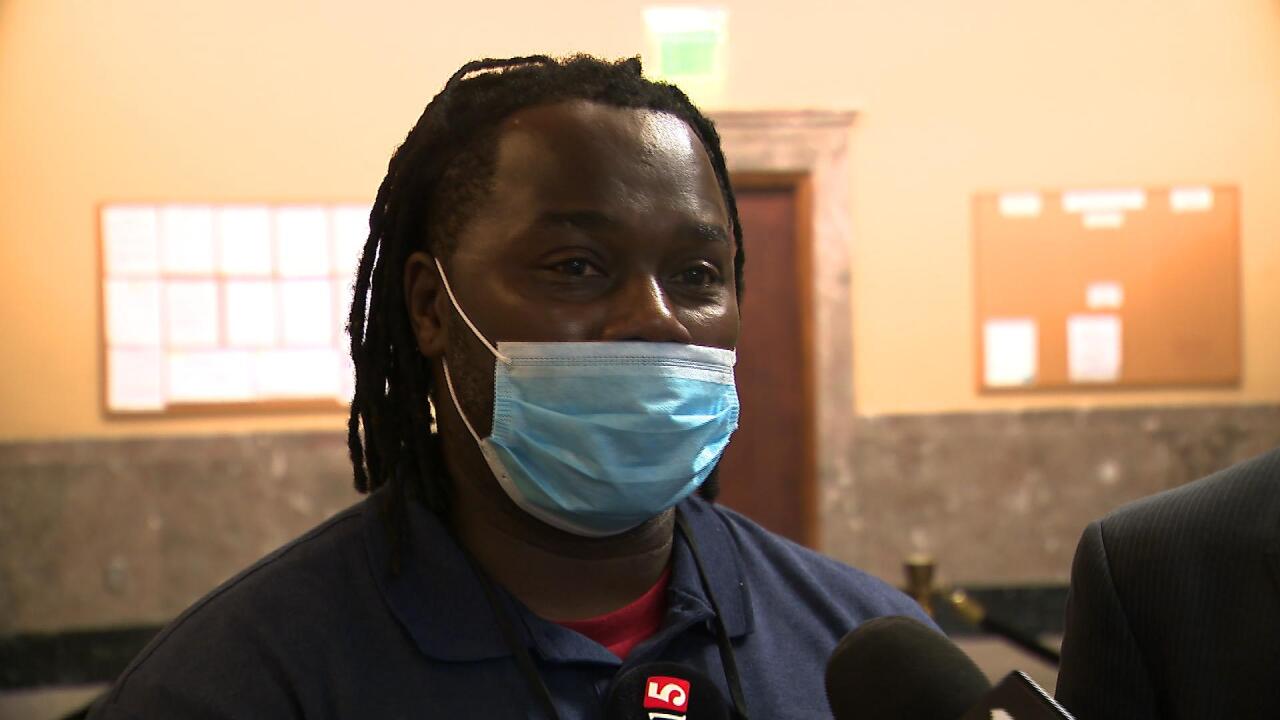 NASHVILLE, Tenn. (WTVF) — Charges have been dismissed against a Nashville man who spent nearly seven years in prison for a crime he'd insisted he did not commit.

William Arnold was convicted in 2013 of sexual assault after being accused of raping a 10-year-old boy that he'd been mentoring through the Big Brothers, Big Sisters program.

But in court Monday morning, Robert Jones, the head of the Davidson County District Attorney's Conviction Review Unit, told the judge he had thoroughly reviewed the case.

"And based on that information, I no longer have confidence in the conviction of Mr. Arnold and his guilt," Jones told the judge.

The Assistant DA alongside him took the same position.

"The District Attorney’s office has decided to enter a dismissal in this case and not seek for the prosecution of Mr. Arnold," ADA Tammy Meade announced in court.

Immediately after that hearing Monday morning, Arnold, at first, was at a loss for words.

He told reporters that his family, friends, and faith kept him going.

"It was all about just turning it over to God and having a crew of people who pulled for me and I knew I had more people rooting for me and against me. And I knew I had to get back to those people," Arnold said.

Arnold was originally sentenced to 25 years behind bars. He insisted though that he'd been "wrongly convicted" and had been fighting to expose what he called a twisted case of "mistaken identity" ever since.

He told NewsChannel 5 Investigates in a series of phone calls from prison back in 2018 that he never sexually assaulted or inappropriately touched the boy.

"Never. Never. Never have and never will," Arnold said during one of the phone calls.

Arnold had not only always maintained that he was innocent, but that the sexual relationship had actually been between the young boy and another man also named William.

The mother of Arnold's accuser told NewsChannel 5 Investigates back in 2011 after she'd filed a $3.5 million dollar lawsuit against Arnold and Big Brother Big Sisters that Arnold had repeatedly had sexual relations with her son.

"I know it happened more than maybe ten times," she told us.

She had said that after her then 10-year-old began acting out sexually, she asked him if anyone had done anything sexual to him and after she asked if William had touched him, her son finally nodded yes.

But, there was another man named William in the boy's life at the time.

The District Attorney in Williamson County had in fact been investigating that other man and his relationship with the child. During a videotaped interview with a detective and DCS investigator, the other man admitted to the relationship.

But as NewsChannel 5 Investigates first reported in October of 2018, Arnold got an unexpected ally in his fight to overturn his conviction when a renowned forensic psychiatrist scrutinized at the case and said she believed him.

Dr. Barbara Ziv was a key prosecution witness in both the Bill Cosby and Jerry Sandusky trials

During a court hearing where Arnold was trying to get his conviction overturned, Ziv told the judge she did not think Arnold had sexually assaulted the boy.

"I can say William Arnold's behavior in no way, shape, or form conforms to the pattern of behavior of a child molester or a pedophile," Ziv told the judge.

Ziv said she was convinced that "the other William" was who the child was referring to when questioned by his mother who made the assumption that it was William Arnold.

"His mother ran with it. Everybody else ran with it and nobody ever stopped to say, 'Put on the brakes' and say, 'Iis there another William?'" Ziv opined.

She also shared how when she recently interviewed the now-young man that his change in demeanor was so dramatic when she questioned him about "the other William," that it became quite clear to her that Arnold wasn't the one.

In February of this year, in an unusually long 70-page ruling, the Tennessee Court of Criminal Appeals threw out Arnold's conviction and sentence. The judge who wrote the opinion said Arnold's trial attorneys had been "ineffective" and the prosecutor was "exceedingly improper" during closing arguments, calling the assistant district attorney's "comments and behavior"... "overwhelmingly inflammatory."

But the ruling also made note of and highlighted Dr. Ziv's analysis of the case and her conclusion that Arnold did not commit the crime.

After the state Attorney General decided not to appeal, Arnold was released from prison in late April, while he waited to hear whether the Davidson County DA would retry the case.

Last week came word from the DA that they would not seek any further prosecution of Arnold.

It became official during the court hearing Monday morning.

Arnold was asked afterwards if he ever doubted this day would come.

Arnold, now 48, walked out of the courtroom and shook attorney Patrick McNally's hand.

Arnold said of McNally who represented Arnold as he fought to get his conviction overturned, "Patrick has been my saving grace in a lot of this. He’s called me back from the ledge a number of times."

McNally told reporters it was a shame that he and Arnold were both wearing masks.

"Because you can’t see the smiles and the joy that’s between both of us right now," McNally explained.

For Arnold, that rush to conclusions meant spending six years and nine months in prison.

"You can’t put a level of frustration on that. You can’t imagine what it’s like to have to live with this type of moniker on you. To have to wake up every day in a place where you’re not supposed to be, around people that you’re not even supposed to know. There’s no way to articulate that. But it happened," Arnold said.

Both McNally and Arnold thanked the DA's Office and its Conviction Review team for taking another look at the case.

But for Arnold, it clearly should not have taken so long.

"I still strongly believe the District Attorney should have looked closer at this seven, eight, nine years ago. We shouldn’t, I shouldn’t have to be talking to you right now. But I am so it is what it is for now.

Arnold said he knows there was a reason he went through what he did and he's looking forward to moving forward with his life.

"And I just want to say to all those people who are still fighting, who were wrongfully convicted, it can work. I’m thankful that it worked for me and I hope that it can work for others," he said.

Both Arnold and his attorney thanked the DA's Conviction Review Unit for taking another look at the case.

Glenn Funk created the unit after he took office and Arnold's case was the first to be dismissed after a review.

Before his arrest, Arnold worked for the Tennessee Board of Regents and served on a number of community boards.

Conviction thrown out for mentor accused of raping boy